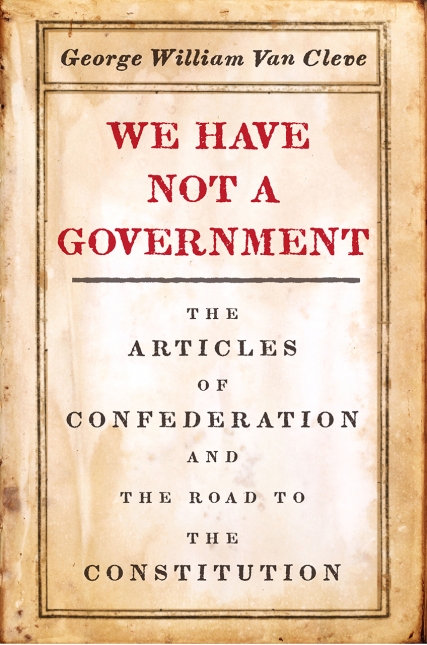 Dysfunctional government is a subject that never goes out of fashion, though it feels particularly urgent in today’s America. We Have Not a Government takes us back to the first government of the independent United States, one so poorly designed and so insincerely implemented that it lasted only seven years, from 1781 to 1788.

In this important book, George William Van Cleve explores the terminal dysfunction of the Articles of Confederation. The Articles’ flaws seem so obvious in retrospect that it is easy to wonder why they were adopted. All 13 states, regardless of size, had one vote in Congress. Nine states had to vote in favor of major legislation. All had to support any tax (so no national tax ever won approval). Congress could not regulate commerce. There were no courts. There was no executive branch.

How did the architects of this structure of stalemate expect anything to get done?

The answer, of course, was that they didn’t want a national government that could do very much. Republican theory, and their experience with the British empire, left many Americans hostile to centralized government powers, a hostility that could only be eroded by experience under the weak regime they thought they wanted.

With careful attention and rich research, this book examines in depth each of the ways that the Confederation failed. It could not pay its debts. It could not protect its people in conflicts with Indians or foreign powers, or even from pirates. It could not create a single currency or build prosperity after the terrible carnage and loss of the Revolutionary War.

Finally, it could not resolve conflicts between or within the states. After only a few years under the Articles, leading figures wondered when and how the United States would fall apart.

The lodestar of Van Cleve’s story is George Washington, as he should be. In vivid language, Washington predicted that, without a stronger government, “Anarchy and confusion must prevail,” and the United States “shall soon molder into dust and become contemptible.”

The book argues persuasively that Washington diagnosed the core weakness of the Articles: that a government unable to levy a tax is not an actual government.

Van Cleve has little time for revisionists who insist that times under the Articles were not so bad, that the nation might well have muddled through. He shows that state governments could not overcome their own self-interest to act for that national good, that the Confederation soon was “permanently insolvent,” and that “Americans were forced by events to reevaluate the limits of republican government and liberty.”

Indeed, this book serves as an essential corrective to Americans’ tendency to treat the Confederation era as an embarrassing train wreck in our past — not unlike Reconstruction after the Civil War — that should be sped past and ignored in search of historical tales that will make us feel better about ourselves. We do so at our peril. The “grand bargain” that produced the Constitution in 1787 grew directly from the Confederation experience.

Which is not to say that the book lacks the capacity to annoy.

In the constitutional debate, those supporting a stronger central government called themselves “federalists” and called their opponents “anti-federalists.” The labels were misleading, to be sure, but they were used at the time, have persisted since then, and are generally understood.

Yet the author refers to adversaries of strong central government as “federalists,” a reversal of label that can bring on cognitive dizziness, a bit like a Revolutionary War history that announces that American soldiers will henceforth be referred to as “the British.”

Another unhappy choice was addressing the era’s crucial problems — unpaid war debts, Western emigration, a controversial treaty, and internal conflicts — in silo fashion, exploring one subject through the period, then doubling back to discuss the next, and so on. Balancing chronology and theme is a challenge in every narrative, but blending the two would have better served this book’s powerful message.

David O. Stewart is author of The Summer of 1787: The Men Who Invented the Constitution and Madison’s Gift: Five Partnerships that Built America.