Kingdom of Nauvoo: The Rise and Fall of a Religious Empire on the American Frontier 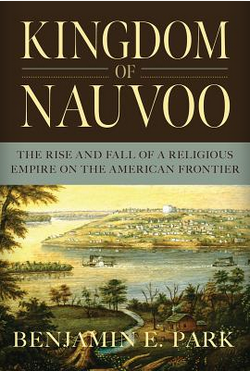 Read this book for a straightforward discussion of Joseph Smith’s polygamy using several largely ignored primary sources. In it, author Benjamin E. Park also draws out the tensions of minority rights versus majority rule in an early American fledgling democracy. Using the Mormon experiment as a case study, he explores boundaries of race, gender, and whiteness. After the first two chapters, I could hardly bring myself to put it down.

Kingdom of Nauvoo is the history of the final years before Smith died and before Mormons migrated west to the Rocky Mountain region. Mormons gathered in western Illinois to an area they renamed Nauvoo, or “beautiful place.” There, they began experimenting with a new social system to thwart the broken system of American democracy.

The author is an assistant professor of American history at Sam Houston State University, with a rich background in Mormon history. He engages with groundbreaking research on two fronts. First, he writes the neglected and forgotten stories of several other demographics in addition to the white men who normally center in Mormon histories.

This careful attention situates Mormons within the holistic context of native populations, Black men and women, and people of color in general, and reveals more salacious details of women’s experiences. The result is a dramatic reshaping of the motivations and impulses of the white men who’ve previously silenced or skirted these other narratives.

Secondly, he draws on a new source in the Council of Fifty meeting minutes which have only relatively recently been released by the Church of Jesus Christ of Latter-day Saints archive. These new sources alter the historical narrative, which, until now, has largely been a history of Mormon victimhood. Park’s history is a much more honest account.

Park details how Smith hid his early polygamous wives from his first wife, Emma. “It appears that sometime in mid-May 1843, [Emma] agreed to Joseph being sealed [married] to four women: the Patridge sisters, whom Joseph had already wedded two months previous, and the Lawrence sisters, teenage orphans over whom Joseph had been an appointed guardian.” He also notes how many of these unions influenced Smith’s more outward actions.

Race within and without the Mormon circle surfaces in the discussion. Detractors in the Nauvoo era like John C. Bennett distinguish Mormons from white people, yet Smith’s desire to include all races also fails. With the Council of Fifty primary sources added to the history, revelations of the extralegal lengths to which Mormons went to preserve their leaders and their kingdom is astonishing.

The early chapters of Kingdom of Nauvoo introduce prominent characters a couple times and may be familiar to Mormon readers. Then, the narrative explodes with episodes of polygamy and kingdom-building that the average Mormon might not know about.

Park also avoids a typical Mormon trope about why people were drawn to the movement in the first place, an approach that feels fresh and original. However, there were times when I wanted a little more discussion about why people voluntarily joined such a controversial movement. It would humanize the larger body of Mormons not fully aware of these secret activities.

In other words, the book places the kingdom vis-à-vis Joseph Smith without addressing much of what a general Mormon settler, outside of Smith’s inner circle, might be experiencing or not experiencing in parallel. Again, that story has been told elsewhere. It is refreshing to read an historical account from the perspective of Smith’s inner circle that examines its more shocking behaviors. Be aware of the perspective Park is taking.

In the end, Kingdom of Nauvoo is an important and riveting read about a largely white minority testing traditional systems of power. It is also a fascinating case study of a man who tried to reset the boundaries of sexual propriety — including who participated and who wavered — and of what the primary sources reveal about the motivations of those involved.

AA Bastian published on a new source for the Second Anglo-Burmese War in the Journal of Burma Studies, “The Other Bayonet: A New Source to Frame the Second Anglo-Burmese War.” She’s currently working on a history of a Mormon missionary, using a new source, in India, Southeast Asia, and Hong Kong between 1853-1855. Find her on Twitter at @AABastianWrites.

Dead Wake: The Last Crossing of the Lusitania

A masterful account of the doomed ship whose sinking prefaced America's entry into the Great War.

The Opposite of Loneliness: Essays and Stories

Published posthumously, these stories and essays of a recent college graduate display fate’s betrayal of a promising literary future