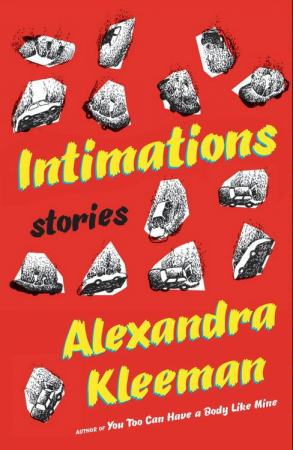 “But what does real look like?” asks a character in “Fake Blood,” one of the strange and compelling stories in Alexandra Kleeman’s new collection, Intimations. And I, caught up in Kleeman’s smart, lovely prose and her odd story worlds, find myself wondering the same thing.

Here is a woman covered in fake blood trapped in a murder mystery in the middle of an elegant ball. Here is a daughter at dinner with her parents and new fiancé when her boyfriend arrives at the door, and then an old suitor turns up — neither of the men is particularly familiar to the daughter, the narrator. One of the men is trying to murder her.

Here is a family who keeps itself in an eerie isolation: “Outdoors, water soaks the ground and is lost. Indoors we live with rules that prevent things from becoming lost or broken, from leaking outdoors and coming loose.” Here is a wild boy who finds his way into a village and is taught to dance as a way to tame him, an attempt that only works partway. Here are angels who “pass word from angel to angel, holy hand to holy hand, turning it over in their palms and observing it from every angle…mouths open, joyful” in as beautiful a discovery of language and story as any I’ve read.

Here, too, in this collection of stories loosely linked by characters’ names and occupations, by themes and concerns, is a handful of “realistic” tales among the odd; stories of motherhood and fear, of uncertain couplings, of loneliness and solitude, mistaken identity and second thoughts.

But even in the realistic stories, there is an undercurrent of not quite knowing, of something potentially dangerous beneath the surface — as in the story “Jellyfish.” A newly engaged couple vacations in the pristine paradise of an all-inclusive resort, but in the clear blue ocean waters, the unusually hot weather has stimulated the jellyfish populace. “They populated the shallows, a slight distortion in the shifting, flashing patterns of sunlight on sand.”

Intimations is told in three parts, and the book jacket indicates that these sections signify three stages of existence — birth, living, and death. But, really, I am not sure that matters. Would a reader find the book more satisfying if she were to recognize this subtle, affected organization? Maybe, in the way that she feels satisfied when she aces all the Mensa questions in the back of the in-flight magazine: satisfied and smart, and a little smug.

The most satisfactory of these stories aren’t the tricky ones, though. Those are like words spoken in a foreign language that a reader might know well enough to understand, but not well enough to master the language’s nuances.

But the most satisfying of this collection’s stories are the ones that are built on familiar foundations: the juggling act of taking a baby for a stroll; the impulsive, petulant, unwise flirtation that comes after a lovers’ quarrel; the invitation made to a stranger out of loneliness. These stories are complex and lovely, filled with real moments and strange abstractions and parallels (often drawn from the natural world: cows, lobsters, pet mice) that lend further authenticity and resonance to the narratives.

Even in the tricky stories, though, the opaque ones, there is much to be admired. They come to us like dreams. Sometimes comforting, sometimes terrifying, but always, always steadily told, sure and unapologetic. From “Rabbit Starvation”: “The rabbits are white, and when I stack them they stay put, looking back at me from a creamy vagueness dotted with eyes…Dozens on dozens shuffle across the floor in short bursts, hopping weakly then growing tired, making the sound of teeth sinking into marshmallow.”

And in the final story, “You, Disappearing,” there is this: “The apocalypse was quiet. It had a way about it, a certain charm. It could be called graceful. It was taking a long time.”

These bits — images and moments of story and sensory perceptions and turns of phrase — return to me like the snatches of my night imaginings do the morning after. Shadowy at first, then bright and vivid, and often pained and beautiful. As in “A Brief History of Weather,” when a father returns home from a trip and opens his brown suitcase, full of snow. “Before our eyes he opens it up, his hands slip back the two latches in clean sound, and then the snow seen against a silk lining, paisley-printed, all the snow glaring back the lamps and shaming our house with the brilliance of things that belong outside it.”

Intimations may be as much about writing as anything else. About the slipperiness of the creative process and the risks a writer takes when she tries something other than the traditional; when she breaks the rules.

“And then I wanted so badly to let it all be normal…” the pretend-blood-covered narrator from “Fake Blood” says. “…And I thought to myself that if we followed the rules, perhaps we’d all make it out fine.

“Either this would work, or it wouldn’t,” she says. And I can imagine Alexandra Kleeman at her writing desk thinking the very same thing. Oh, it works, this book, these stories, the dreamscapes captured. It all works just fine.