A smart meditation on despotism disguised as a fantastical tale. 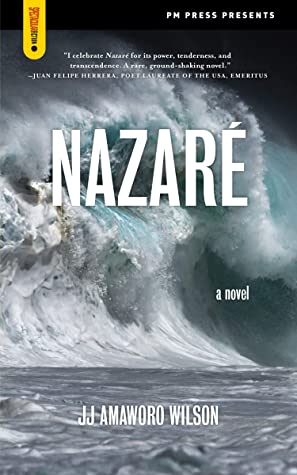 A giant whale washes ashore in a mythical town called Balaal. A motley team of fishermen (Japanese, West Indian, Somali, and sundry others) unsuccessfully attempts to dislodge the unfortunate beast. Soon, the entire village descends upon the beach and tries to drag the creature back to sea. But like the hapless fishermen, they fail.

Along comes Kin, an 11-year-old child who lives in a shipping container. Coincidentally or not, a huge wave known as a Nazaré magically appears at the same time, and the whale is washed back into the ocean. Fundogu, the levitating holy man respected by all, declares Kin the future of Balaal, and the boy is baptized Kin of the Waves.

JJ Amaworo Wilson’s Nazaré is a tale — some might call it a tall tale — of poverty and repression, of resilience in the face of hopelessness, of superstition and magic, of religion as a buttress to revolution. On a larger scale, it is an attempt to make sense of some of the bloodiest occurrences in history, to bring to light the injustices brought on by the dictatorships that have plagued parts of the modern world and the peasant revolts that have sprung up in response.

So how does one categorize a book like Nazaré? Is it magical realism like Gabriel García Márquez’s One Hundred Years of Solitude? Speculative fiction as in Margaret Atwood’s The Handmaid’s Tale? Does one dub it dystopian? Fantasy? Absurdism? Or is it a combination of all of these, an example of what some critics refer to as fabulist fiction, akin to the works of authors like Kafka and Borges?

Nazaré combines elements common to all of these genres, for it portrays a political landscape that is repressive in nature and fosters revolt, and it does so by broaching the improbable and the fantastic, and by including elements of realism mingled with the magical. Not coincidentally, it is filled with historical allusions that are hard to ignore.

Balaal, for example, is ruled by a powerful and corrupt family known as the Matanzas, a name that brings to mind notorious despots of Central and South America. The residents of Balaal and its outskirts are brutally repressed, live in poverty, and, at the least hint of rebellion, are pounced upon by the Tonto Macoute, the Matanzas’ vicious police force.

By now, the reader may begin to catch some of the historical references. The Somozas in Nicaragua; Duvalier and his infamous Tonton Macoute in Haiti. And then there are Cienfuegos and Los Barbudos, characters which are clear references to the “bearded rebels” of the Cuban Revolution.

And yet there is nothing terrible in Nazaré: no mass killings, no torture, no ravaging of villages (although all are alluded to). Instead, the story is told with humor and a touch of the absurd. There is Bruja of Laghouat, a witch who assumes various forms — including that of a fly that annoys Ochiades, the ancient judge, and a bird that assists Kin while he is imprisoned by Matanza — and Hormigonera, an anteater woman who frightens everyone but never seems to do harm.

As for the revolution, it starts with what becomes known as the Popcorn Rebellion, which occurs during the trumped-up trial of a bruja who befriends Kin, a trial that’s abruptly ended when the citizenry begins hurling popcorn kernels at the judge. Even the mayor is unharmed after he is overthrown, left instead to wallow in his own dark prison.

And so Nazaré entertains as much as it sheds light on some of the cruelest travesties of the 20th century. The reader does not need to understand each of its historical references to appreciate the novel. As a literary work, it stands on its own and will transport you to a world where nothing is as it seems.

Mike Maggio’s newest collection of poetry, Let’s Call It Paradise, will be released by San Francisco Bay Press in January 2022.