In the Hour of Victory: The Royal Navy at War in the Age of Nelson 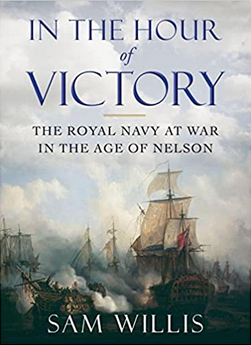 Many readers are familiar with the “golden age” of British naval power through the fictional exploits described in Patrick O’Brian’s Jack Aubrey series and C.S. Forester’s Horatio Hornblower exploits. A reader who wants to look beyond fiction will find in Sam Willis’ In the Hour of Victory: The Royal Navy at War in the Age of Nelson an account of England’s hegemony of the seas during the Napoleonic Era, told in the context of seven naval victories.

Just as England in World War II owed her survival to the RAF, she owed her survival during the Napoleonic Wars to the wooden walls of the British Navy. In that earlier era, the most complicated machines in the world were sailing warships that provided the swiftest mode of transportation available. The efficiently run British Navy required a tremendous number of men — more than 100,000 — to man its ships. Those vessels often stayed at sea for as long as a year at a time, and the large manpower requirements contributed to war with the United States in 1812 because Britain impressed American seamen to keep its fleet fully staffed.

The author has drawn on original after-action dispatches that had remained unread for over a century until Willis delved into them. These were usually in the form of letters to the Admiralty secretary from the fleet admirals reporting after seven noteworthy British naval victories of the Napoleonic Era (1794-1806). The author cites first-hand accounts of these battles to describe the personalities and tactics that allowed the world’s most powerful navy to achieve victory in clashes with the Dutch, French, Danish, and Spanish navies, sometimes in conflict with more than one country’s fleet at a time. Willis says, “It is the aim of this book both to place these letters in the context of their battles and to examine their significance. As fascinating for what their authors leave out as for what they put in, they remain urgent and riveting more than 200 years after they were written.”

The book’s chapters follow the chronological order of the seven major battles Willis focuses on. His narrative provides the context of each battle, giving its historical and political background and explaining its impact upon English domestic morale and politics as well as its international ramifications.

Because the full-length dispatches, which are provided in their entirety, are in the original, stilted language of the late-18th/early-19th century, often containing the spotty grammar and spelling of the sailors, Willis explains the context of each entry and provides additional clarification. The dispatches were written by a variety of people during the wars: lesser admirals and ship captains involved in the fray who list the ships on both sides, diplomats who witnessed the battles, fleet surgeons listing the battles’ “butcher’s bill,” and boatswains detailing damage to the ships. The author points out that casualty figures were usually inaccurate.  An admiral’s view of a particular battle was often incomplete, based only on his personal observations. An experienced naval historian, Willis does a good job of using many other sources to give readers a more complete picture of the various battles.

The reader will encounter some little-known factual tidbits such as in the battle of St. Vincent, when Rear Admiral Horatio Nelson led the boarding party to capture a first-rate Spanish warship he also used this prize as the launching platform to capture still another first-rate ship. He was the first British flag officer in 284 years to have led a boarding party. Another interesting fact was that the British learned in that battle that instead of oak, the Spanish used cedar to build their ships, making the inside of these opulent vessels quite redolent. In two battles, one of the British ships was skippered by William Bligh of Mutiny on the Bounty fame, following his return to England after being cast adrift. He later went on to become a vice admiral, spending 53 years in the service. Also, three days after the famous Battle of Trafalgar, a hurricane struck the area, sinking or driving off much of the defeated French/Spanish fleet. Only the determined efforts of the persistent British sailors kept the British survivors of the battle afloat, even the dismasted ships.

It is quite unexpected to read a naval historian declare that “naval battles did not win wars.” Willis admits that wars are to conquer territory, and for that you need armies. Indeed, shortly after every one of these seven battles, the English army won a major land battle.  In England, however, nothing was as popular with the public as a naval victory. Willis argues that wars were won in this era by negotiation, and battles — whether on land or sea — gave England leverage to negotiate a better peace. Willis goes on: “What actually happened in the battle was far less important than what the dispatch described. The dispatch had already acquired an agency of its own.” And this was despite each having inaccuracies.

This book boils down over 20 years of European history during the French Revolution and during Napoleon’s time in power into a microcosm of history through the lens of seven major sea battles. In contrast to Willis’ book, Arthur Herman’s To Rule the Waves: How the British Navy Shaped the Modern World is a nine-year-old treatise on the British navy from the early-16th century to the Falkland Islands’ defense, in which the Napoleonic Era takes up only a chapter.  N.A.M. Roger’s The Command of the Ocean: A Naval History of Britain, 1649-1815,published in 2005, devotes the final two chapters to the time frame covered by Willis.

As a lifelong student of naval history, I recommend In the Hour of Victory to anyone interested in how naval battles were fought during the age of sail or how European history in the late 1700s and early 1800s was affected by wars at sea. For a volume crammed with so much information — including notes, a bibliography, an index, a glossary of naval terms, and an appendix with the biographies of the Admiralty secretaries who were real powers of the British navy — Willis’ book is an easy read.

Gary Knight has been a writer and tutor for 15 years, following a 27-year career in lobbying and politics, including three terms on the City Council in Falls Church, Virginia. A graduate of the U.S. Naval Academy with a graduate degree from American University, he is active in veterans’ affairs.