America's Great Game: The CIA's Secret Arabists and the Shaping of the Modern Middle East 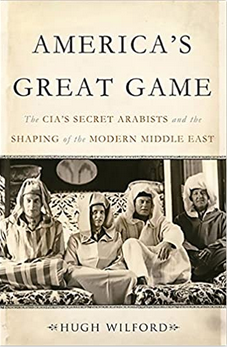 Few Americans remember the brief tenure of Husni Zaim as president of Syria. The vainglorious colonel seized power in 1949 in a coup encouraged if not instigated by the Central Intelligence Agency, did or promised to do a few things welcomed by Washington, and was himself overthrown five months later.

Given Syria’s sorry modern history of coups and strongmen, the Zaim episode might seem trivial, but it is a key moment in Hugh Wilford’s absorbing America’s Great Game: The CIA’s Secret Arabists and the Shaping of the Modern Middle East. Before that, Wilford notes, “Americans had been known in the Levant as missionaries, doctors, and professors. Now they were starting to be seen as spies.”

Wilford tells how the CIA, created in 1947, set sail into the Middle East with the best intentions, ran aground on its own failings, and was overwhelmed by forces and events it could not control. In the early years, the agency embodied the tradition of American pioneers who believed in a bright future for the post-colonial Arabs and in the possibility of a permanent alliance between America and a new freedom-loving generation of progressive Arab leaders. Those dreams soon evaporated as U.S. support for the creation of Israel and the CIA’s role in the 1953 coup in Iran discredited the United States and its agents.

The principal players in Wilford’s lively drama are colorful characters who may be unfamiliar to most readers but are well known to students of modern Arab history: the Roosevelt cousins, Kim and Archie, grandsons of Theodore; Miles Copeland, Nasser’s buddy and author of the cynical classic The Game of Nations; Bill Eddy, impresario of Franklin Roosevelt’s famous meeting with the king of Saudi Arabia; and Wilbur Crane Eveland, author of Ropes of Sand.

In Wilford’s account these game-players seem to have operated independently or even in defiance of CIA Director Allen Dulles. In those years, the agency reflected the style of its wartime predecessor, the Office of Strategic Services (OSS), loosely organized and flexible, offering plenty of room for individual adventurers and gamblers. Field agents could and did freelance and dream up far-fetched schemes on their own.

Many of these agents were from the East Coast elite, steeped in British tradition and “orientalist” romanticism, who attended the best schools and married proper young women, but others were from less-polished backgrounds. Miles Copeland dropped out of the University of Alabama to become a professional jazz trumpeter and came to intelligence work through U.S. Army service in World War II. Amazingly, his first job with the agency was station chief in Damascus. Eveland was a hobo until he found his calling in wartime intelligence work, becoming fluent in Arabic and serving as defense attaché in Baghdad. In Wilford’s well-structured narrative, their collective biography is a cautionary tale: once the CIA got into the business of trying to oust Middle Eastern leaders it regarded as dangerous and choose more pliable successors, the agency destroyed its own reputation and America’s with it.

America’s Great Game is unfailingly interesting as long as Wilford, a professor at California State University, Long Beach, sticks to events in the Middle East. Unfortunately he devotes rather too much time to the story of American Friends of the Middle East, a domestic CIA front organization aimed at countering Zionism and American sympathy for Israel. With the renowned journalist Dorothy Parker as its public face, this group was energetic and dedicated but essentially irrelevant: by the time it was fully operational, the state of Israel had been created and recognized by President Harry S. Truman. That decision was not going to be reversed no matter what Parker and her allies did or how much money the CIA gave them.

Wilford’s book is broadly researched and well documented. (Full disclosure: He cites and quotes from this reviewer’s biography of Bill Eddy, Arabian Knight.) But like many other accounts of the Arab world during the second half of the 20th century, it relies almost entirely on Western sources. Wilford can’t be blamed for the dearth of Arab archives from that era, but it is unfortunate that we still know so little about what the principal Arab figures really thought.

Wilford’s narrative is full of fascinating anecdotes and his prose is clear and often lively, despite occasional lapses in usage (he uses “liaise” as a verb). But in the end, what does this tale amount to? As the author acknowledges, the CIA achieved positive outcomes here and there, but in the end most of the results, if any, were negative. Except for the 1953 coup in Iran, which carried such unfortunate consequences, the CIA did not engineer the events that shaped today’s Middle East: the partition of Palestine (which the CIA opposed), the Suez War of 1956, the Soviet outreach to neutral countries following the death of Stalin that gave Arab leaders an alternative to U.S. influence, the Free Officers’ coup in Egypt in 1952, the Baathist takeover of Iraq, the Baghdad Pact, the Six-Day War. The agency’s early courtship of Nasser ran aground on the anti-communist rigidity of Eisenhower’s secretary of state, John Foster Dulles.

As Nasser said to a disillusioned Miles Copeland, “The genius of you Americans is that you never made clear-cut stupid moves, only complicated stupid moves.” Wilford’s Arabist romantics envisioned themselves as noble knights, the vanguard of a new era of Arab enlightenment and Muslim-Christian cooperation. Instead, alas, in the Middle East today, CIA is a four-letter word.