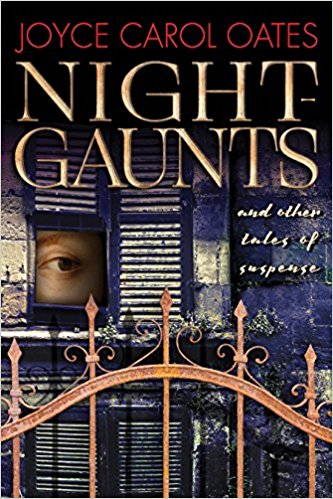 Each of the stories in this most recent collection from Joyce Carol Oates originally appeared in other publications. It may be that reading them separate from each other would have allowed each one to stand on its own, thereby heightening the reader’s appreciation. In putting them together, neither the whole nor the parts benefit.

The author’s repetitive narrative tics — such as her intentional overuse of parenthetical phrases — nag to the point of intrusiveness. She also uses the avoidance of names to make a point: the cruel Sunday school teacher in “Sign of the Beast” is too evil to be named; the obedient Asian lab technician in “The Experimental Subject” is a useful but obscure functionary. Unfortunately, the constant use of “Mrs. S___” for the one and “N___” for the other is simply aggravating. (In “Walking Wounded,” the device spirals out of control.)

It seems that facial birthmarks are particularly malign, as evidenced by descriptions in two different stories. In “Sign of the Beast,” the narrator states, “The birthmark on my (left) cheek like a pustule was shameful to me.” And in the titular “Night-Gaunts,” the protagonist’s abusive, syphilitic father sports one. “The birthmark has become an inflamed-looking boil that no amount of make-up and powder could disguise.”

Nonetheless, the stories here are appropriately disturbing. The nightmares that Oates conjures are generally grounded in the ugliness of daily life, of the situations beyond our volition that drive us to the edge of reason. In particular, “The Experimental Subject,” which is the longest of the tales, is most effective precisely for its groundedness, its observance of the quotidian details that make its horror plausible.

In it, our unnamed protagonist — about whom Oates gives us all possible clues to understand that he’s called Nguyen, so why bother being so coy? — pretends to be another student in order to cull out a chunky, awkward, friendless undergraduate as the experimental subject needed for the next phase of his revered professor’s “research” project.

The unsuspecting mark, Mary Frances, is described in terms usually reserved for apes (“an unusually low simian brow…large splayed feet and a center of gravity in the pelvic region”) and cattle (“tentative manner like that of a creature that is being herded blindly along a chute”). Certainly, it helps the researchers to dehumanize a person before performing inhuman experiments on her without her knowledge or consent.

Interesting in concept is “The Woman in the Window,” in which Oates imagines the story captured in Edward Hopper’s painting “Eleven A.M., 1926.” We spend time in the head of the woman sitting in the chair by the window, wearing only shoes, and in that of her abusive, married lover, who is tardy and still taking his own good time to get to their tryst.

Whenever she finally decides to employ them, I, for one, am rooting that her sewing shears get the job done.

Abuse — psychological, emotional, physical, sexual, often in combination —forms the common theme in almost all of these stories, which then capture the catastrophic results. Sometimes the abuse is practically invisible, as in “The Long-Legged Girl,” in which the long-term effects on Elinor of Victor’s constant affairs — or possibly unconsummated obsessions — with his beautiful, adoring undergrads finally leak out in an equally almost-invisible retaliation.

A little disconcerting, though, is the amount of attentive detail given to cataloging the physical defects of characters like Elinor and Mary Frances to the point that it feels like the author’s personal disdain speaking. And yet, I might not have noted that if I hadn’t read these stories in collection.

The Atlas of Forgotten Places: A Novel

A moving, fictionalized account of real-life horrors in Africa.