The Pioneers: The Heroic Story of the Settlers Who Brought the American Ideal West

An inspiring tale of little-known patriots and the big-time impact they had on our country. 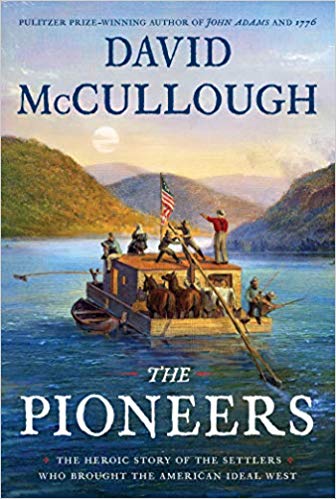 There are many benefits that go with being a Pulitzer Prize-winning, bestselling historian. From a financial standpoint, someone with this credential commands lucrative book advances and speaking honorariums. In the case of David McCullough, though, maybe the greatest reward is he gets to write about whatever he wants, regardless of how obscure it is before he elevates his chosen subject to the multitudes.

Recognize the names Manasseh Cutler, Ephraim Cutler, Rufus Putnam, Joseph Barker, or Samuel Hildreth? Was Marietta, Ohio, ever mentioned in a history class? What? Never heard of those guys or that town? Join the crowd — neither has anyone else, except the few who dug through the archives at Marietta College’s Legacy Library before now.

In September 2016, McCullough entered that library, and the staff spoon-fed him the secret jewels of their local history. When shown the treasure trove of letters, diaries, and memoirs authored by the largely forgotten pioneers who settled the land at the confluence of the Ohio and Muskingum rivers over two centuries ago, the author’s mind raced back in time to his days at Yale and his favorite professor, Thornton Wilder.

Connecting the dots in a fast-twitch blink, McCullough realized that the little-known documents in his hands were the most stellar primary source material imaginable and could lay the groundwork for telling the story of Marietta’s founding along the same personal history lines as Wilder did over 80 years ago with Grover’s Corners, New Hampshire, in “Our Town.”

Less than three years after that fateful visit, the library’s old records have fulfilled their historical potential and now undergird the storyline and vivid word pictures interwoven throughout McCullough’s heartwarming new book, The Pioneers: The Heroic Story of the Settlers Who Brought the American Ideal West. If this saga about the “can-do” spirit of those who created modern civilization in America’s heartland doesn’t give the reader a roaring case of patriotic goosebumps, then it’s time to see a psychiatrist.

True to form, McCullough unfolds the almost-forgotten history in a fast-paced chronological sequence. Why did a small group of Revolutionary War veterans in Massachusetts want to leave their homes in 1787 and head west to the lonely virgin forests of the Ohio Country? So they could receive a measure of compensation for their wartime service, since the government had not paid them. Our fledgling country was insolvent, and its currency had become almost worthless.

What gave the New England vets the right to stake a claim on lands in this faraway place? McCullough’s favorite Founder, John Adams, secured the territory by negotiating the treaty in 1783 that ended the American Revolution, with the Ohio Country being part of the 265,878 square miles (that later became Ohio, Indiana, Illinois, Michigan, and Wisconsin) contained in “the Northwest Territory” acquired from England.

The property to be claimed by the pioneers in Ohio had important restrictions on it, thanks to the efforts of Manasseh Cutler, an esteemed preacher from Ipswich Hamlet, Massachusetts, who persuaded the Continental Congress to enact the Northwest Ordinance of 1787 on his terms —meaning it contained Article I, providing for freedom of religion; Article III, providing for the advancement of public education; and Article V, providing for the prohibition of slavery.

Having those terms in place, McCullough affirms historian Albert Bushnell Hart’s conclusion that the Northwest Ordinance “stands alongside the Magna Carta and the Declaration of Independence as a bold assertion of the rights of an individual.”

Once the legislation passed, it was time for action. Led by Revolutionary War hero Rufus Putnam, two parties comprised of 48 men left Massachusetts in December 1787 for a four-month journey on foot to the Ohio Country, with wagons carrying their provisions. They averaged only one mile per hour in their travel due to the challenge of crossing the Allegheny Mountains, and then having to stop and build boats when they reached the Ohio River’s headwaters.

Upon reaching their destination, inspired by the vision of Puritan leader John Winthrop, they set out to create “a city upon a hill,” and proceeded to do just that — clearing acres of dense forests, laying out streets, and building a four-blockhouse stockade along with cabins, huts, and bridges over creeks. In a matter of months, the pioneers created a town they named “Marietta” in honor of Marie Antoinette for her having persuaded the French king to support the American cause in the Revolution.

When word of the successful town-building venture got back to New England, families decided it was time to start a new life “out west.” Upon arriving in the Ohio Country, they soon joined with their neighbors to expand the community and create bonds of fellowship that caused a soldier at nearby Fort Harmer to see them as “the happiest people in the world.”

Of course, they suffered setbacks, contending with wild animals, belligerent Native Americans (though some tribes were friendly), harsh winters, floods, droughts, diseases, and even an earthquake. By 1795, however, after federal troops led by “Mad Anthony” Wayne vanquished the hostile Indians, residents at last found themselves in a secure environment, which caused more people from the East to begin arriving in droves.

Observers passing through the area reported back to the East that Ohio’s inhabitants had “habits of industry, respect for order, and strict subordination to law,” as well as “a fondness for sports and special meetings where drinking was practiced,” meaning they maintained an exemplary lifestyle while living in a place viewed as “the most beautiful and pleasant location to be found on the banks of the Ohio River.” Paradise Lost was found.

By 1802, Ohioans decided it was time for a constitutional convention. At that gathering, Rufus Putnam and Ephraim Cutler (Manasseh’s son) persuaded their fellow delegates that the supreme law of the land in that part of the country should align with the Northwest Ordinance of 1789, meaning slavery darn sure better remain prohibited. Achieving this result, Marietta and its new neighboring towns soon provided a safe passageway for runaway slaves fleeing the South.

Progress continued to advance step by step. Before long, Marietta’s citizens built a post office and school, followed by a public library, churches, meetinghouses, a bank, a courthouse, and a university. Brick homes replaced log cabins. The town supported its local newspaper, and traffic along the river led to the development of the shipbuilding industry there.

In 1837, a visitor from Boston described Marietta as a “society in a high state of perfection, institutions established on a firm basis, and everything moving on in harmony and prosperity.” A few years later, leading Marietta doctor Samuel Hildreth looked at his town and said, “In the short space of 55 years, the gloom and silence of the wilderness has given place to civilization, with the arts of agriculture and commerce which follow in its train.”

In all likelihood, this hidden success story of early American urban development would have stayed buried in archives and lost forever had McCullough not had his antennae up when he fortuitously entered the Legacy Library at Marietta College three years ago.

One can only imagine Simon & Schuster’s reaction when its premier historian called in from the hinterlands and described what he wanted to cover with his next book — an unknown tale of forgotten figures who started and incrementally grew what ultimately became a minor-league town. For any other author, such circumstances would have surely caused the publisher, as umpire, to bellow, “Three strikes and you’re out!”

Fortunately, Marietta was not Mudville. There in the Ohio Country, “Mighty Casey” McCullough swung from his heels and connected with his sweet spot, knocking the story of The Pioneers out of the park. By bringing a real-life version of “Our Town” into print eight decades after the publication of its fictional predecessor, the two-time Pulitzer winner surely knows that, somewhere up above, his mentor is smiling.

Talmage Boston is a presidential and baseball historian and lawyer in Dallas, Texas, whose most recent book is Cross-Examining History: A Lawyer Gets Answers From the Experts About Our Presidents (Bright Sky Press, 2016).