The Real World of College: What Higher Education Is and What It Can Be

An insightful survey of what students actually get out of campus. 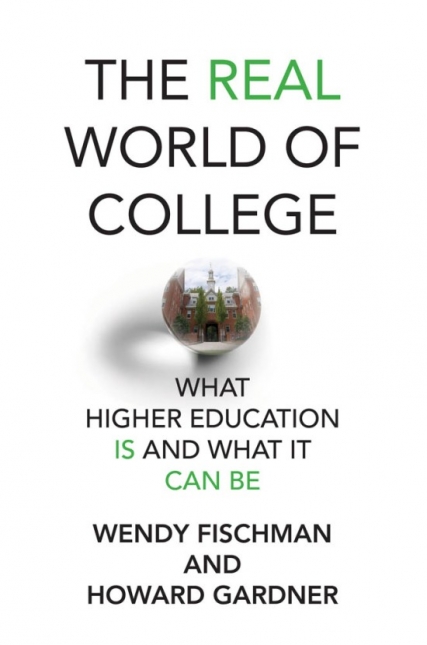 As a sector, higher education was profoundly disrupted by the pandemic. Many commentators are trying to read campus tea leaves in order to determine what the “new normal” on campuses is going to look like. While Wendy Fischman and Howard Gardner’s The Real World of College gives short shrift to some key economic contexts for the state of higher education today, it nonetheless provides a timely and welcome contribution to the national conversation about the content, quality, and purpose of a college education.

Fischman and Gardner, both affiliated with the Harvard School of Education, set out to take a longer and deeper view of the “non-vocational” college experience. Beginning in 2013, they spent five years visiting 10 campuses across the country. These visits entailed in-depth interviews with students majoring in diverse fields and, to a lesser extent, adults on campus (including faculty, administrators, and student-life staff).

With the help of a research team, the authors then spent two years analyzing and coding these interviews. In writing up their findings, they opted to play a dual role: as cultural anthropologists who report on conditions on the ground and as clinicians who diagnose the ills of the sector and offer prescriptions to improve the health of higher ed today.

Refreshingly, Fischman and Gardner are firm in their conviction that the academic mission should be central to the college experience. And although most colleges theoretically agree with this priority, the authors point out that college tours too often jettison academics in favor of sports complexes, clubs, and residential amenities. Such muddying of the college mission means that students are not as focused on acquiring Higher Education Capital (HEDCAP), which the authors define as “the ability to attend, analyze, reflect, connect, and communicate on issues of importance” and alternatively describe as “capital of the mind.”

By measuring HEDCAP scores of first-year students and graduating seniors, they find that overall, “students with low scores of HEDCAP decrease, and students with high scores of HEDCAP increase.” Interestingly, however, 54 percent of students start in the moderate range, while 56 percent finish their degree in that range. That finding suggests a lack of substantive intellectual impact of college for way too many students.

The acquisition of mind capital is not correlated with academic major, so those looking to herald or demonize STEM or the humanities will find themselves disappointed. However, it’s worth noting that the authors are surprised and troubled by students’ lack of engagement or even acquaintance with serious literature.

According to Fischman and Gardner, the conceptual models that students bring to bear on their college experience impact their acquisition of mind capital. HEDCAP scores tend to be lower for those who hold a primarily “transactional mindset” — the view that college is necessary for future success — than for those who think about college as an opportunity for exploration or even transformation. Mental-health challenges and feelings of alienation or not belonging, which turned out to be unexpected major themes of these pre-pandemic interviews, necessarily impact the ability of students to do meaningful academic work and to develop intellectually. Of course, as the authors note, the pandemic has greatly exacerbated these psychosocial issues.

Fischman and Gardner are admirably invested not only in accumulating data and diagnosing problems but also in making recommendations to different stakeholders (students, parents, presidents and trustees, faculty and staff, job recruiters) that will improve the health and sustainability of academically driven institutions. Most notably, they recommend a resistance to what they term “projectitus,” the proliferation of “centers, staff, and initiatives” that is both effect and cause of “mission sprawl.”

To reassert the centrality of the academic enterprise, they want schools to distinguish themselves via their curriculum, which should remain in control of the faculty (this last point is particularly pertinent right now as legislative and educational governing bodies strive to determine what can and can’t be taught in college classrooms).

Given Fischman and Gardner’s ambition and acumen, I was surprised that some issues weren’t more consistently on their radar. For example, when they are addressing faculty, they seem to assume the stability of that constituency, an assumption dramatically at odds with the increasing adjunct-ification of the academy — i.e., the majority of faculty today are on short-term contracts and are not paid a living wage.

The material conditions of teaching cannot be disentangled from the conditions and outcomes of learning. Similarly, the increasing tuition-dependence of private institutions, as well as rampant economic disinvestment in public institutions, has an outsize impact on the consumer model of higher ed.

In keeping with their discomfort with the transactional mindset, the authors ask, “Is the principal purpose of college about earning or learning?” Given that they smartly note those with HEDCAP “possess a capacity that proves useful across the occupational landscape,” I found myself restive with their willingness to reproduce that tired binary of “learning” or “earning.” I also wonder if it’s time to retire the term “non-vocational education.”

However, despite its lack of a more sustained engagement with the economic contexts of the sector, this book provides valuable data and reflection on the ways that higher ed has “lost its way” and how it can recenter the academic mission. As someone who has spent more than 30 years teaching at a national liberal arts college, I hope that higher-ed stakeholders put this accessible volume on their summer reading list.

Helene Meyers is professor emerita of English at Southwestern University, where she held the McManis University Chair. Her recent book is Movie-Made Jews: An American Tradition.

By Lenny Kravitz with David Ritz