How the Hell Did This Happen? 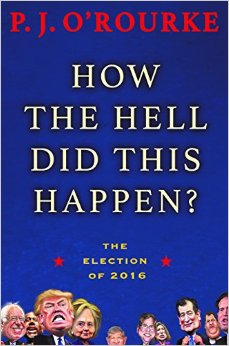 Before there was Saturday Night Live or Comedy Central or any other of the now sundry venues mining politics for satire, there was National Lampoon. Unless you are well into your Social Security years, it’s difficult to appreciate the magazine’s political importance during the turbulent 1970s. Back then, National Lampoon was the undisputed keeper of the flame of informed humorous public skepticism — mocking elites with literary rapiers.

At the editor’s desk during its glory years was a young P.J. O’Rourke, only a few birthdays distant from his college writing classes. It was a heady experience that has defined O’Rourke’s subsequent career.

And what a career. Sixteen books of humor, some popular enough to land on the New York Times’ bestseller list. A career enriched at various turns as a foreign correspondent for Rolling Stone, plus as a writer of movie scripts for Rodney Dangerfield and articles for countless publications. In addition to a busy public speaking schedule, O’Rourke is also a frequent guest on NPR’s popular “Wait, Wait, Don’t Tell Me” quiz show.

O’Rourke is four decades beyond his original National Lampoon roots, yet remains firmly attached to them. His latest book, How the Hell Did This Happen?, which dissects the election of 2016, echoes the disdain and snarky observations about “elites” that informed his early years and much of his writing since.

But time and events have worn the act thin. The aging shows in his opening comments about the candidates:

“Hillary Clinton carries more baggage than the Boeing she used as secretary of state visiting every country in the world that later blew up in her face in her quest to fulfill the mission of the U.S. secretary of state, which is to accumulate frequent-flier miles.”

“Some political pundits claimed that [Chris] Christie’s abrasive style wouldn’t play west of the Jersey Shore. These pundits were raised by pot-smoking parents and went to Montessori schools.”

“Has the office of the presidency diminished in stature until it attracts only the leprechauns of public life? Or have our politicians shrunk until none of them can pass the carnival test, ‘“You must be Taller Than The Clown to Run for President?”’

You can almost hear the groans from those now feeding on a daily diet of Stephen Colbert, John Oliver, Samantha Bee, and other Jon Stewart alumni who’ve shaped political satire into its current multimedia art form.

Once the reader wades through O’Rourke’s introductory barrage of forced humor, however, you find him on firmer ground. He migrates from what he freely admits is his opening “rather sour note” to a breezy interview with U.S. Senator Rand Paul, who, like O’Rourke, is a libertarian-leaning Republican. That’s followed by a clever discussion of the case to be made both for and against GOP candidate Marco Rubio (“the least insane candidate”).

In more or less chronological order, O’Rourke discusses the highlights of the campaign — the primaries, the conventions, the debates — taking detours along the way to address such diverse topics as candidate “fashion notes,” The Federalist Papers, and, now and then, some fun facts. Who knew, for example, that, in 2013, Donald Trump was inducted into the World Wrestling Enterprises Hall of Fame?

As the biggest targets, Trump and Clinton take the brunt of O’Rourke’s salvos. Though a Republican, and despite his characterization of Clinton as one of the bad witches in the Land of Oz, O’Rourke opts to support her because she would be “the second-worst thing that could happen to America.”

O’Rourke’s look back at 2016 is posed as a question much of America is still asking: “How the Hell Did This Happen?” His conclusion: “The election was terrible because it wasn’t an election, it was a rebellion. America is having a civil war, or, to be more accurate, a War of Incivility. The war is not between Republicans and Democrats or between conservatives and progressives. The war is between the frightened and what they fear. It is being fought by people who perceive themselves as controlling nothing. They are besieging the people they perceive as controlling everything. We are in the midst of a Perception Insurrection, or, depending on how you perceive it, a Loser Mutiny.”

O’Rourke has plenty of company in concluding that the 2016 election resulted in a populist uprising. But few other writers have described it as powerfully and with such an economy of words.

For more than 40 years, O’Rourke has thrived on satire, skewering the nation’s political, economic, and media elites. With this book, a brisk chronicle of the elite class’ greatest defeat, he has struggled to find humor. No doubt because the winner, the ultimate anti-elitist, was hardly the type of outsider O’Rourke and other system skeptics would’ve selected to carry their banner.

In other words, the campaign of 2016 was no laughing matter. But in answering the question he poses in his book’s title, O’Rourke has expressed an understanding of the social and political forces that mold today’s society. He’s migrated from humorist to pundit. Or, should we say, “elitist”? And after so many years on the other team, he’s probably asking himself: How the hell did that happen?

For more than 30 years, Joe Rothstein developed media and strategies for political candidates and causes as a professional consultant and media producer. He is author of the fictional thriller The Latina President and the Conspiracy to Destroy Her. Rothstein also writes weekly opinion columns for the website USpoliticstoday.com.