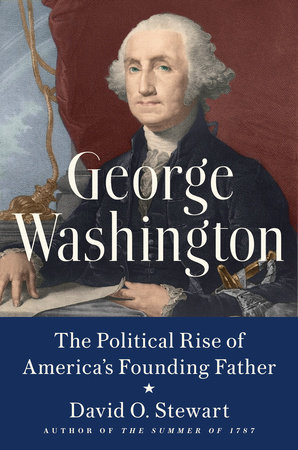 As befits George Washington’s Christ-like glory in the national imagination (the interior dome of the Capitol depicts his apotheosis), the period between the apocryphal stories of his childhood and his emergence as a charismatic leader is an historical blank in the minds of most Americans. I’m a history buff and I didn’t even know, for instance, that Washington served 15 years in relative obscurity in the Colonial Virginia House of Burgesses.

It’s this widespread ignorance that David O. Stewart tries to cure with his sturdy George Washington: The Political Rise of America’s Founding Father. As the title informs, Stewart’s thesis is that this largely unknown formative period of Washington’s career was the source of the future president’s formidable political acumen, something else most Americans know nothing about.

That’s no accident. Stewart is up against a centuries-old, carefully cultivated image of Washington as the ultimate disinterested statesman — an image first cast by Washington himself. Politics was a dirty word in his day, almost as much as it is in this one. But in stark contrast with today’s eager campaigns of self-justification, anyone seeking public office back then had to proclaim a level of disinterest in the job matched only by his degree of incompetence to perform it.

As a DC native, I was also surprised to learn the active role the proprietor of Mount Vernon took in the civic affairs of Fairfax County, currently the District’s most populous suburb. Though the county contained about a million fewer residents then and no Springfield Bypass, Washington’s seat on the 18th-century equivalent of the board of supervisors still forced him to attend to the concerns of often demanding homeowners.

Under Stewart’s energetic hand, the cold-marble hero warms into a flawed but remarkable person: ambitious, evenhanded, tender, callous, impetuous in his youth, wiser with age. Fathering no children of his own, he worried and grieved over two troubled stepchildren Martha brought into their marriage who died young. He loved buying land — and sometimes used sharp practices to acquire it — but was a bad investor always in debt.

Stewart gives due attention to the most disturbing aspect of Washington’s life and character: his enslavement of hundreds of people of African origin. The author references this ongoing crime throughout the book and dedicates its last section to it.

For some, Washington’s slaveholding disqualifies him from admiration. Stewart obviously doesn’t share that view, but neither does he let his subject off easy. He notes how Washington, like many of his slaveholding contemporaries such as Jefferson, expressed unease with the barbaric practice but never let his conscience outweigh his convenience.

Washington’s expression of brutality extended beyond trading in personal bondage. As the hotheaded young leader of the poorly supplied colonial Virginia regiment intermittently dueling the French on America’s western fringe, he responded to attempted desertion by his men with the energetic use of lashings and hangings — and seemed to take pride in the horrific efficiency of his discipline.

Because he was nearly toothless his whole adult life and forced to wear sharp and bulky dentures (though not, as another popular error would have it, ones made of wood), Washington’s portraits present a visage that’s dour even for its era. But a successful politician — even a furtive one — has to possess an appealing personality, which usually includes a sense of humor. And Washington apparently had one.

Reflecting on the proposed new U.S. constitution that finally emerged after a long, hot summer of debate, he quipped that any defects could not be blamed on “the hurry with which the business has been conducted.” Impatient again as president, this time at the lack of progress in negotiations with revolutionary France, he inquired with black humor, “Are our commissioners guillotined?”

Stewart’s writing is reliably fluid and steady; the few repetitions, omissions, and errors stick out as novelties. And his clear command of the material often leads to interesting insights: For instance, that Britain’s relatively light imperial footprint in America led to greater self-reliance and independent action by the colonists; and that, paradoxically, Washington’s regal manner as commander-in-chief offered essential cover for the development of democratic government.

But Stewart strains at times to support his proposition — previewed in the book’s subtitle that dubs its subject America’s singular “founding father” — that Washington played the central role in almost every stage of America’s efforts to achieve independence and create a new government.

His importance to the creation of a local declaration laying out the colonists’ rights — and, in turn, the influence of these Fairfax Resolves on the national process of revolution — seems exaggerated. Similarly, while Washington obviously did hold sway at the Constitutional Convention as its president, his procedural rulings from the chair can’t really stack up to James Madison’s shaping and shepherding of the resulting document itself.

How to handle our heroes is a central challenge for historians. As social mores and scholarship standards evolve, iconic images begin to twist and blur. It’s a reminder that the past, regardless of how many sources are consulted (this book has over 100 pages of endnotes), is still largely what we make of it. Here, Stewart has made a portrait of a fierce, optimistic striver — a very American type.

[Editor's note: David O. Stewart will speak at the all-virtual Gaithersburg Book Festival on Mon., May 3rd, at 7 p.m. (EDT).]

By Rex Bowman and Carlos Santos