A Deadly Wandering: A Tale of Tragedy and Redemption in the Age of Attention

An informative yet flawed discourse on neuroscience, distracted driving, and the journey through grief. 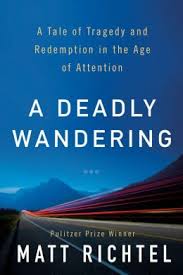 Nineteen-year-old Reggie Shaw was involved in a car wreck in late 2006 near Tremonton, Utah, that resulted in two fatalities. From the beginning, it is obvious that the cause was distracted driving. Reggie was texting.

This pivotal point of Matt Richtel’s new book, A Deadly Wandering, is clear: Texting while driving is dangerous. The book, however, is not easily summarized. It is a polemic against texting and driving; an examination of grief; a study of introspection and redemption; and a treatise on advances in the neuroscience of attention and focus.

A Deadly Wandering would be more aptly subtitled “in the age of inattention” to capture the essence of its distracted-driving theme. This is the first indication that precision of language is not its key attribute, a statement it pains me to make given the author’s credentials.

Richtel is an accomplished journalist. He and a team from the New York Times won the Pulitzer Prize in 2010 for work on the dangers of using mobile devices while driving. He has done an abundance of research on the topic, and that work is evident in this book.

I don't question the sourcing, research, or message. It is, however, an unpleasant read not only because it is a sad story, but also because the narrative needs editing. Written in colloquial language, it often disregards the old-fashioned notions of good writing (like grammar), belabors many points, and drags out the heart-wrenching details of the deaths of two men who were scientists and colleagues, husbands and fathers. The extensive use of the vernacular detracts from the presentation of the author’s extensive research.

Richtel’s résumé may help to explain the narrative — well-researched reporting that crosses the line of objectivity while trying to read like a mystery. He has a degree in rhetoric from Berkeley and a Columbia journalism degree and is the author of four novels.

The story alternates among chapters about Reggie; the wives of the crash victims; a victim's advocate; legal questions concerning the accident; and the work of neuroscientists on attention and focus. The narrative jumps from one perspective to another. Just when the discussion of a scientific point is getting interesting, we’re back to the tabloid-like tale of the grieving widows.

I do not mean to diminish a tragic loss, nor demean the personal transformation of Reggie as he confronts his responsibility for the accident, but the book is at its best when detailing the groundbreaking work in the field of neuroscience concerning the effects of multitasking on our ability to focus.

Although research doesn't prove mobile devices are addictive, recent evidence indicates the effects on the brain of cell phone use are strikingly similar to those of addictive substances. Technology appeals to our primitive instincts for social connection and induces a pleasing chemical release in our brains when we share personal information. Richtel provides fascinating details about focus and attention, information that goes beyond texting and driving.

For example: human reaction time is not instantaneous, and the clouding effects of distraction last for several seconds after the diversion ends, a critical period when operating a motor vehicle. There is an inherent conflict in our brains between “bottom-up” and “top-down” attention: Top-down refers to focus, bottom-up to a distraction that catches our interest. Personal communication devices work at both levels. Hence their allure.

This is interesting stuff, and the science is well told. There is, however, too much trivial detail about the backgrounds of people peripheral to the main storyline. Do we really need to know that Jesse, a teacher and the subject of one of the neuroscientist's experiments, lives in the East Bay, just across the Bay Bridge from San Francisco? Does the reader need to be told that wireless means the capability to send signals without wires?

The use of language is, at times, as in the subtitle, misleading or unclear. Richtel refers to "a bunch of data." He describes Reggie as adding “half a teaspoon more of shame” after some cross words with his mother. I’m not sure how to understand that.

About noise at a cocktail party, Richtel writes in a confusion of the singular and plural, "It is everywhere, and it is created by someone, or many, each with their own needs." (Italics are mine.)

In 2006, when the accident happened, the idea that people could not effectively multitask — specifically that texting while driving was dangerous — was neither well known nor generally accepted. But it is now. That message is not new. What is new is the science that backs it up.

I would have preferred a book on the neuroscience, information that is fresh and revelatory, rather than yet another emotional plea for the responsible use of cell phones. Although we’ve seen the tragic consequences enough — the flowers by the roadside, weeping teens at a friend’s funeral — we have not learned the lesson.

C.B. Santore is a freelance writer and editor in East Hampton, Connecticut.