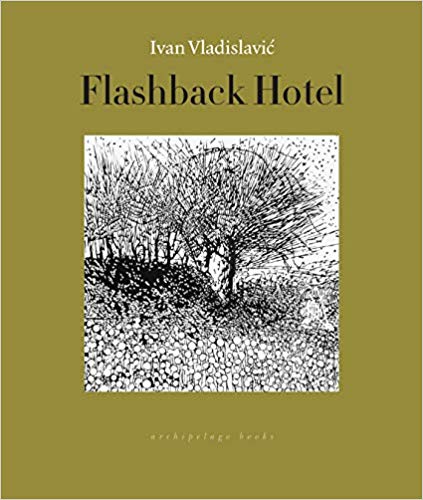 Flashback Hotel contains two collections of the South African writer Ivan Vladislavić’s early stories. Vladislavić’s themes in these collections run from the political to the psychological and social. His stories have intriguing premises, employ a variety of arresting techniques, and often use turns-of-phrase that reflect a unique turn of mind.

The first collection, Missing Persons, tends toward the surreal. In “The Box,” for instance, a man named Quentin and his wife watch their bellicose prime minister on television decry those who “seek to overthrow my government…wish to create the impression that we are weak, that we will capitulate…suggest the country is in a state of civil war.” The prime minister adds, “Every cowardly act of violence will harden our resolve.”

Quentin thinks the leader is out of his mind and, as the TV camera zooms back and the prime minister becoming smaller and smaller, Quentin reaches through the screen and pulls him out. The tiny politician is now an indignant, helpless captive.

Little by little, Quentin extracts from the TV more public figures — and eventually ordinary people — until, in his spare room, he houses a miniature society over which he is an all-powerful, capricious dictator.

In “Movements,” the author presents the arc of a troubled relationship compactly: “She cries for the first time after all these years…She thanks him for making it possible, as if he is an onion…They cry together…She cries more often. He can’t keep up…He cries as counter-espionage…He starts to enjoy it when she cries…He stops crying. She doesn’t notice.”

In the same story, Vladislavić uses synesthesia-like images to present the characters’ emotions: “His music…spreads itself out on the walls to colour them his colours”; “He cries for the first time, in black and white”; “She listens to the hands, just the hands. The one on her shoulder, curled like a crook, she hears, is pushing her out through the crack of the door.”

The second collection, Propaganda by Monuments, contains strong doses of irony. In “The Tuba,” the playing of a black South African Salvation Army band irritates whites having a barbecue. One white is so angry that he tries to drown them out by playing his own tuba. But he and his instrument are carried off by the band:

“In the midst of the mêlée, Sergeant Dundas thrashed, pawing at the tuba as if it were no longer a weapon but a serpent in whose coils he was entangled, trying to throw it off, trying to escape. But they would not let him.”

The story’s last sentence — “Sergeant Dundas borne along…his spot marked by the big mouth of the tuba, growing smaller and fainter, passing out of our neighborhood, our lives, and our times” — suggests the passing of the remnants of Apartheid thinking.

In “Courage,” a white sculptor, commissioned to make a statue for the “government of the people,” comes to a small village seeking a model. He says he wants to present not a man, but the “idea of courage.”

However, instead of choosing one of the village’s strong, healthy young men competing for the privilege, he selects a man who is a walking sore: a two-fingered right hand, a mangled left foot that does not heal, missing front teeth, and a torn earlobe.

The villagers are incensed because he has “rejected the best-looking men we had to offer because of the tiniest imperfections, only to settle on this wreck of a human being.” The sculptor explains, “When a man has lost a part of himself, it might well be the business of the artist to return it to him.”

But when the story’s narrator, years later, sees the finished statue, “It is not an idea. It is a soldier. He wears boots and he carries an ak47. He turns [the face] towards the enemy but the expression on it is not courageous…He has reason to feel pleased with himself, this freedom fighter, for he has all his working parts in their proper places, including his trigger-finger.”

The reader is left to ponder: Did the sculptor sell out the idea of courage for a propagandistic hero-image? Or was he, rather, returning to a man his lost parts?

As intriguing as Vladislavić’s approach to his tales is, some stories, like “Journal of a Wall” or “The Booklover,” take far too long to get where they’re going. Others, such as “Tsafendas’s Diary” and “The Terminal,” will be more accessible to the reader who knows particulars of South African history beyond what we generally learn from Western news.

These latter stories lack a universal philosophical quality to carry them. Nevertheless, the collections in Flashback Hotel are, as a whole, well worth reading.

Jessie Seigel is an associate editor at the Potomac Review. Her fiction has appeared in numerous publications, including Ontario Review, Gargoyle, Peacock Journal, Daily Science Fiction, and the anthology Electric Grace. She also writes on writing at The Adventurous Writer.

Everything Here Is Beautiful: A Novel

A tender portrayal of the effects of mental illness on a woman and the people who love her.