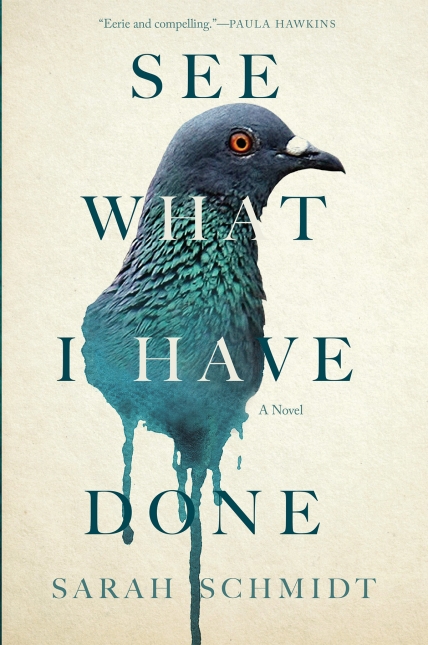 The story of Lizzie Borden, a woman who allegedly murdered her father and stepmother with an ax, has become ingrained in pop culture largely due to such a verse comprising just four short lines: “Lizzie Borden took an ax/and gave her mother 40 whacks/When she saw what she had done/she gave her father 41.”

Rarely, however, do nursery rhymes tell the whole truth; those lines belie a much more complex and uncomfortable story.

In See What I Have Done, Sarah Schmidt unpacks the story of Lizzie Borden and her family by examining the crime from the viewpoints of Lizzie, her sister, Emma, their housemaid, Bridget, and a stranger named Benjamin.

From the first, Schmidt sows doubt about who the true perpetrator of the double murders may be (in reality, Lizzie was acquitted of the crimes and no other suspect ever was charged). We are thrust directly into the aftermath of the crime, which we discover through Lizzie’s eyes as she takes in her father’s mutilated body, prostrate on the sofa.

She waits “to see if he might blink, might recognise me. I wiped my hand across my mouth, tasted blood.”

Lizzie’s voice in this first chapter is certainly strange; the syntax of her thoughts is crooked and confused. “The clock on the mantel ticked ticked,” she thinks as she wanders the empty house, waiting for help. “My legs began to shake and drum into the floor and I took a bite of my pear to make them still.” But odd thoughts, especially during a time of great trauma and shock, do not a murderess make.

The sense of vertigo only deepens as we hear from the other characters in the book. Emma, Lizzie’s older sister, is experiencing a brief period of peace away from her family, taking an art class in a nearby town. As she dresses on the day of the murder, unaware of the impending disaster, she fantasizes about being free of Lizzie by remembering a day 20 years earlier.

Alone in the house that day, she gave vent to her anger at being treated unfairly by her father and sister, “filling the house with my voice and body until the glass tumblers chinked inside the dining room cabinet…The house made me feel as if I were standing inside a giant, inside a pyramid, inside an ocean-deep well: like I would be swallowed up.”

The family’s maid, Bridget, is locked into the tedious household routine of a dysfunctional, combustible family and is desperate to return home to Ireland. Her sense of pity wars with her feelings of disgust for Lizzie, an adult who behaves like a child and who “should’ve long been out of the house and into her own family.”

The menacing stranger Benjamin, who shows up in Fall River the day before the murders, is seeking an appointment with Mr. Borden. Schmidt fleshes Benjamin’s character out nicely despite his status as an outsider — an intriguing choice that draws the reader deeper into the book, giving her another perspective on the story.

Benjamin’s proclivity for violence and for meting out especially gruesome punishments to those who he deems have behaved unfairly, makes for a counterpoint to the accounts of the three women, whose voices are less blunt. Beating a woman he feels is responsible for his family’s unhappiness, he rejoices: “Another punch. Angela slumped deeper in the sofa as each fist came for her…Everything was becoming right and the air smelled of blood, honey-sweet.”

Schmidt’s timeline can be confusing; for most of the book, two characters are recounting the day before the murder, while two others are describing the day of the murder itself. In addition, all four characters have frequent flashbacks meant to illuminate their characters, making it seem as though the book is taking place at many different times simultaneously.

This suits Lizzie’s disjointed chapters, and perhaps Emma’s, since her past is so intertwined with Lizzie’s. For Bridget and Benjamin, however, the reminiscences often serve as distractions rather than clarifications.

Despite these occasional diversions, the author does a superb job of conjuring up the circumstances surrounding Mr. and Mrs. Borden’s murders. Her prose mimics trains of thought without rambling, and by allowing the characters to tell their own stories, she is able to avoid some of the exposition necessitated by a third-party narrator.

Schmidt’s slow burn — the buildup of the day before and the day of the murders — pays off in a big way. Although the real circumstances of the Borden homicides may never be known, it’s clear the author has done her research; she weaves theories and history together in a way that leaves the reader with the impression that her version just might be what actually happened.

And what better way to end any murder mystery, true or fictional, than with a sense of uncertainty?