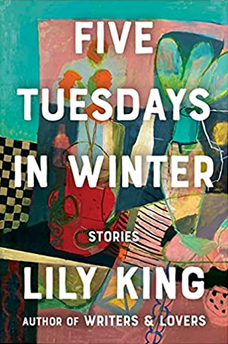 There’s a forthright blurb on the cover of Lily King’s new short-story collection, Five Tuesdays in Winter. It’s from fellow author Ann Patchett, stating, “I loved this book.” Indeed, King’s writing is reminiscent of Patchett’s: It’s her quick strokes to paint a scene and telling details that build characters into people we recognize as much as it is the elements that go unspoken and serve to tweak the tension the tiniest bit tighter.

King is known for her bestselling novels, which include Euphoria and Writers & Lovers, but for readers who may not be familiar with her longer work, these stories serve as tasty hors d’oeuvres — they’re satisfying and yet leave us wanting more.

The first half of the collection is redolent of adolescence, steeped in the funk of hormones, confusion, misery, and rage that mark teenagers as their own alien species, causing them to “become a creature I can’t understand,” as 14-year-old Carol’s mother tells her in the opening story, which is indeed titled “Creature.” Of course, from an adolescent’s perspective, it is the adults who are the creatures, beyond all understanding and outside the reach of grace.

Without consulting her, Carol’s mother agrees to a two-week, live-in babysitting arrangement for her with one of the rich families on the seacoast outside of town. For a girl living with her mother in an apartment, which is itself a step down from her father’s cracker-box house — empty now that he’s in rehab yet again — slipping into the lives of old money feels transformative.

Her first glimpse of the huge old house, as she bicycles down the long driveway, makes her realize that she never understood before what the word “mansion” actually encompassed: “Gray and white stone with turrets and balconies and other things that jutted or arched or recessed that I had no words for.”

Though she initially mistakes the cook and manservant for her employers, Carol finds her footing in the household with relative ease. “It wasn’t difficult, at least not before Hugh arrived.” Hugh is the hallowed only son of the privileged family. For Carol, the light emanating from him shifts — as we understand it will — from warming to scalding.

There’s a lovely symmetry between “Creature” and “When in the Dordogne.” In the latter story, it is the abandoned teenage son living in the vast house whose perspective shifts as he watches two new caretakers take in the enormity of the surroundings:

“Ed ran into the house and circled the rooms like a dog just let off its leash, climbed up the front staircase and came back down the tight back stairs and then went back up the front set again, whooping and whooping again…”

His mother has hastily hired these local college boys, Ed and Grant, to see to the house — not to her son — so that she can take his father abroad to recover from a “breakdown.”

Both this unnamed narrator and Carol are in the summer of their 15th year, that yawning, defining gap between childhood and adulthood. In an echo from “Creature,” if the boy in “Dordogne” shows the slightest pique, he becomes, his mother tells him “as she whisked me up to my room, a little beast who needed to change back to a boy.”

But unlike Hugh, whose presence is the furnace in which Carol begins to forge her older self, Ed and Grant — not yet fully adult themselves, still feeling the effects of 14 — serve as insightful, caring guides through their charge’s thicket of teen angst.

With something of that same symmetry, “Five Tuesdays in Winter” and “North Sea” both feature the adult gaze on its adolescent progeny — a gaze imbued with its own tortured mix of bewilderment and outrage, underpinned with the certainty of being an impostor, making it all up in any given moment, unequal to adulthood’s rapacious demands.

In “Five Tuesdays,” Mitchell is left with his 12-year-old daughter, Paula, after his wife decamps — “his college buddy Brad coming from Australia and leaving two weeks later with a box of live lobsters and Mitchell’s wife” — while Oda, in “North Sea,” is left with 12-year-old Hanne when her husband is killed biking to work. Paula wants to learn Spanish, and Hanne wants to learn horseback riding; the parents who stayed behind want only to learn to connect.

There’s a sense of progression in the arrangement of the stories, from this initial view into adolescence, then into young adulthood (“Timeline”), parenthood (“South”), middle age (“Hotel Seattle,” “Mansard”), and dotage (“Waiting for Charlie”), each with its own version of longing. Not surprisingly, many of the tales feature budding writers learning or honing their skill. (Do writers so often include characters who are writers because it’s the only way for them to represent how they themselves perceive the world?)

It is the final entry in the collection, “The Man at the Door,” that takes a delightfully hard jog off the path of what has come before. Initially, it seems at one with the other stories: A harried mother — with a demanding infant, two unfinished novels in the basement, and a third underway on the kitchen table — is desperately trying to get words down on the page before they disappear from her mind. She’s able to scribble a few inspired sentences before the baby starts to wail again, and she has to nurse him back to sleep. She “latched him on, and reread the three sentences. How quickly they had flattened, lost their music.”

That’s when a man appears at the door, banging on it with no plans to stop until it is opened to him. He holds in his hand an advance copy of her novel — the one she is currently working on — says he’s from the publisher, and wants to discuss it with her.

As he redlines the copy, mansplaining her writing’s weaknesses while drinking gin that she didn’t have a moment ago from a bar last seen in her childhood home, he morphs into every critic she has ever heard from: the Everywoman Writer subjected to the Male Critique. By the time she disposes of him, she realizes that she doesn’t have trouble with endings after all.