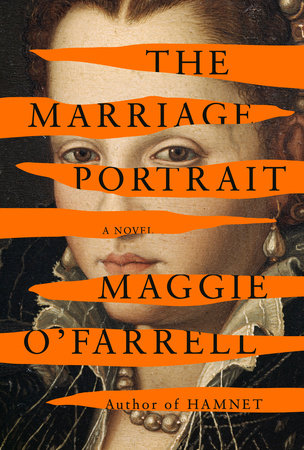 I clearly remember the ninth grade English class in which our teacher read to us Robert Browning’s “My Last Duchess,” and the creeping chill of understanding that shivered through me as he did. It was a lasting lesson that sometimes “happily ever after” isn’t especially happy or even very long.

Author Maggie O’Farrell notes that the protagonist of her latest novel, The Marriage Portrait, is widely believed to be the ill-fated duchess of Browning’s poem. As we’re told on the book’s cover, Lucrezia di Cosimo de’Medici was married in 1560 at the age of 15 to Alfonso II d’Este, the Duke of Ferrara. “Less than a year later,” the copy intones, “she was dead.”

This presents a bit of a pickle from a narrative perspective. O’Farrell has once again, as she so wondrously did in Hamnet, taken a little-known historical figure and imagined the world from her perspective. Yet knowing from the outset that the character we’re meant to identify with — to invest in, to root for — is going to die, and in short order, might give a prospective reader pause. After all, if we know the ending, how does tension build? Or maybe the more critical question, “Am I willing to have my heart broken?”

But, of course, the magnetic pull of learning the answers, and of being captivated once again by O’Farrell, is irresistible.

Portrait is a dual-narrative story, the first thread of which opens in “a wild and lonely place,” a stone fortress to which Alfonso has taken Lucrezia, entirely alone; by the end of the first paragraph, Lucrezia is certain “he means to kill her.” The second thread paints a portrait (as it were) of her life until the point Alfonso spirits her away to this dark and forbidding fortezza. Both threads have the feeling of a fable or fairytale — the Brothers Grimm sort, which are always grim. There is darkness and foreboding, beasts in various forms, imprisonment, and the sneaking in of a changeling.

Just in case any of us still cling to shreds of the Cinderella version of princesshood, O’Farrell is here to strip those away. If women throughout history have been denied agency, girls of the nobility illustrate this lack on a grand scale: Their only value is as pawns of empire-building.

Though she is the fifth of eight surviving children, Lucrezia is isolated. Her family considers her odd, indeed almost feral; her constant wailing as an infant banished her to live her first years down in the kitchen with her wet nurse, doted on by the woman’s toddler daughter.

Once thrust back among her siblings, she is generally invisible and silent, observing and remembering, eavesdropping both on her nurse, Sofia, and on the other nurses to learn their Neapolitan dialect, and on her father and his advisors to learn matters of state. She develops into a talented artist, a skill of no particular value in securing an advantageous match.

The author makes us feel the claustrophobia of the tightly circumscribed world that Lucrezia inhabits, in which she gazes down upon events at a remove, never allowed beyond the walls of the Florentine palazzo of her parents, the Grand Duke Cosimo I and Grand Duchess Eleanora.

The defining episode of her childhood is her fleeting, otherworldly communion with a tiger (for readers wondering about the jagged orange stripes on the book’s cover), which has been captured, caged, and transported over months, at Cosimo’s command, to be displayed in his basement menagerie.

Lucrezia alone comprehends the despair of the imprisoned tiger, “a creature whose desires have all been disregarded” even though it represents “the distillation of life itself.” The two exotic, misused creatures are torn from each other, and later Cosimo casually relates that the tiger has been killed through a careless oversight. “And, what’s more, the pelt was ruined, so it couldn’t even be taken from the carcass.”

The constriction is everywhere. Even Lucrezia’s wedding dress is a misery of imprisonment, with “the bone supports of the bodice straining and squealing against their coverings, the cuffs scuffing and chafing the skin of her wrists, the stiffened collar hooking and nibbling at her nape, the hip supports creaking like the rigging of a ship.”

And what of the bridegroom? Initially betrothed to Maria, Cosimo and Eleanora’s eldest child, Alfonso is convinced to amend the marriage contract to name Lucrezia when Maria suddenly dies. After all, these girls are the daughters of “La Fecundissima,” sure to offer fertile ground for sowing heirs.

Still, in a passing exchange with Alfonso when she is only 10, and later when he sends her a peculiar engagement gift:

“[Lucrezia] had the strange and unaccustomed sensation of having been observed and, perhaps, understood…It was at once touching and unnerving that someone had known or divined that this was the way to her heart. How had he intuited so much about her from one very brief meeting, years ago?”

When they finally look at each other during the wedding ceremony — only the second time she has ever seen him — he shows her in a moment of conspiratorial amusement that he, too, remembers that chance meeting.

Thus, we’re presented with conflicting impressions of Alfonso: the dark, threatening presence at the fortezza, and this charming man who seems to truly see Lucrezia in a way no one else ever has. How can they be the same person? It is the classic dynamic of an abusive relationship. Her glimmer of hope that she and Alfonso might enjoy the kind of loving marriage of almost equal footing that her parents share is quickly snuffed.

At the fortezza, awakening after a night of sudden, violent illness, Lucrezia discovers her maid, Emilia, has arrived with the small retinue of painters who have completed her marriage portrait. No one else is aware of her presence. Kindly, loyal Emilia is Lucrezia’s original babysitter, her milk sister, whose scar from mouth to neck is the aftermath of a pot of boiling water little Lucrezia upended from the stove.

The only other friend Lucrezia has at the fortezza is also a secret: the talented young artist actually painting her portrait, though credit is given to his master, the famed Il Bastianino. This young man, whom others have mistaken as mute, speaks the same Neapolitan dialect as Lucrezia’s dear old nurse, Sofia.

Any concern about a lack of dramatic tension here is unnecessary; the screws tighten inexorably toward the novel’s climax, which must remain undiscussed — at least until the book club meets. That’s unfortunate for a reviewer because there is much to dissect. The final pages will almost certainly leave readers with strong, conflicted feelings about O’Farrell’s ending, if not the entire novel. It’s equally likely readers will embrace the book as hurl it against a wall.

So, can you let me know when you’ve read it, please? I’d really like to compare notes.