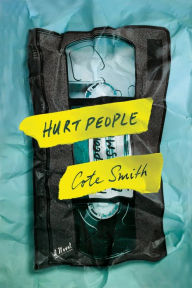 In the summer of 1988, the 8-year-old narrator of Cote Smith’s Hurt People is stuck with his 10-year-old brother in a stifling apartment in a lousy neighborhood in the lousy town of Leavenworth, Kansas. Their mother leaves the boys on their own for long stretches of time while she works day and evening shifts at the pro shop at a golf course.

A murderer has escaped from one of the three prisons that dominate the town. One of the police officers responsible for the prisoner’s original conviction is the boys’ dad, who is now separated from their mom. Their dad picks the boys up every Friday night and keeps them on weekends. He also leaves them alone while he’s at work or unwinding at a local bar.

Smith expertly describes the world as seen by the younger brother. When his parents were still together and they lived in a house with a back yard and his mom didn’t work at the golf course, the world was not as scary and unpredictable as it is now. School has just let out for the summer and the boys are under strict instructions from their mother not to go outside and to never swim in the pool at the apartment complex. It’s not long before the older boy convinces his younger brother to do just that.

A young man who calls himself Chris appears at the pool soon after the boys go for their first swim. He does not live in the apartment complex and should not be there. But the boys should not be there, either. This is the first of many secrets that must be kept. Chris is an expert diver and promises to teach the 10-year-old how to do the Gainer, a difficult and daring dive. The diving lessons are another secret. Smith creates an atmosphere of impending disaster as the long, hot days of summer drag on with the brothers spending more of their time with the mysterious Chris. He seems to appear out of nowhere at the pool, and later he disappears into the forest behind it.

The lives of the mother and the father slowly unravel over the course of the summer as the boys are left more and more to their own devices. The boys sometimes accompany their mom to her job at the golf club. They try to avoid her boss, Rick, who often lashes out at them both physically and verbally. But the mom seems quite happy to spend an increasing amount of time with Rick, an ex-con, on and off the job.

The characters are surprisingly well drawn, considering we learn about them from the boy. We rely on the 8-year old narrator to explain the events and the people in his life. He is often more perceptive than the adults around him.

The older brother, who has always been the confident leader of the two, increasingly bullies the younger one into doing things that make him uncomfortable. Neither brother is given a name. We know them only as the boy and his brother. Theirs is a close, intense relationship. As the story unfolds, the sibling friendship frays. The brothers spend less time together inside the apartment creating an imaginary world with their G.I. Joes and more time at the pool with Chris.

Hurt People is not a traditional whodunit. It is a suspenseful tale in which we fear some crime is about to take place. The reader is caught with a little boy whose world is caving in on him. We worry along with the boy that something bad might happen. We feel the weight of the secrets he would like to tell his parents. Smith succeeds in making this boy a real kid who we understand.

The adults in his life have failed to make his world safe for him. They live in a failing town with few job options. The economic gloom and the feeling that they have no future permeate the lives of all the characters. The mom and dad are caught up in their own financial and moral struggles. They don’t have the time and the energy to be there for their two sons.

The older brother is angry and defiant. The younger is used to doing what his brother wants. This dynamic seems unlikely to end well. Suspense builds slowly and steadily. Not only is a murderer on the loose, but it is tornado season. The town siren sometimes sounds to announce the escape of a prisoner and sometimes to announce a tornado warning. The action and suspense intensify.

Cote Smith brilliantly recreates the Leavenworth of his youth in this debut novel based on a short story he wrote while earning his MFA from the University of Kansas. I recommend it for most readers, excluding any working parents of young children without supervised activities planned for the summer months.

Ellen Roehl is a retired librarian with a Master of Arts in Italian and a Master of Library Science from the University of California at Berkeley.