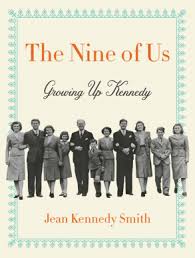 With hundreds of Kennedy books bending library shelves (I’ve written two: Jackie Oh! and Capturing Camelot: Stanley Tretick’s Iconic Images of the Kennedys), another seems like one more shamrock in Ireland — not needed for greening the landscape. But a memoir by 89-year-old Jean Kennedy Smith, the last surviving member of that storied family, might prove irresistible. Like one more chocolate in a binge. So why not?

Caveat emptor: Don’t expect startling revelations or piercing insights. Reading The Nine of Us: Growing Up Kennedy is like sitting down with your great-grandmother to look at a scrapbook of old photographs taken with a Brownie camera loaded with Kodak film. A relic from a bygone era. Sweetly nostalgic.

You begin by already knowing the popular lore: “the nine” are Joe, Jack, Rosemary, Kathleen (aka “Kick”), Eunice, Pat, Jean, Bobby, and Teddy — the four sons and five daughters born to Joseph P. Kennedy Sr. and his wife, Rose Fitzgerald Kennedy, who lived to see the pinnacle of their most cherished aspirations when their second-born son, John Fitzgerald Kennedy, became the first Catholic president of the United States, and Irish Catholic at that.

This thin reverie of a book underscores the Irish Catholic heritage that produced the nine Kennedy children who grew up in the 1920s, 1930s, and 1940s pre-Vatican II era of Latin Masses every Sunday, meatless Fridays, grace before meals, and evening prayers.

Growing up in the 1950s, I, too, was taught by nuns to memorize, memorize, memorize — the Baltimore Catechism, not the world atlas. I can hardly locate Afghanistan on a map, but I’m still able to recite why God made me: “to know, love and serve him in this world and be happy with him in the next.” All by way of explaining why I might be more tolerant than most of Smith’s tendency to render verbatim the prayers and poems of her childhood as well as the Beatitudes from the Gospel of St. Matthew.

Smith recalls the visit Cardinal Eugenio Pacelli, later Pope Pius XII, made to their home in Bronxville, where he sat on the sofa and held 4-year-old Teddy on his knee. Rose Kennedy later had a plaque made and mounted on the back of the sofa to commemorate the event. The author also relates her mother’s executive organizational skills in handling various childhood illnesses like measles, mumps, and chickenpox.

“Why spend the year cycling child after child through the flu…If one of us came down with a contagious illness, it simply made sense to her that the rest of us should come down with it too…So as soon as the doctor stepped from the room of a sibling to report an infectious disease, the rest of us were hustled inside by Mother to play…Within a week the sickness was out of the house for good.”

In previous books, Rose Kennedy has been dismissed as priggish, pious, and humorless, but her youngest daughter also shows her to be devoted to continual self-improvement for her children as well as herself. Even into her 90s, she was still trying to master a second foreign language. She lived to be 104.

At first, I assumed this slight book was ghostwritten but, as no other writer is named, perhaps not. Still, I agonized for whoever did the writing because the poor soul seemed to have no access to fresh material — no personal diaries, fulsome letters, or unpublished photographs.

Instead, the writer had to plunder the public record, cribbing a great deal from The Patriarch: The Remarkable Life and Turbulent Times of Joseph P. Kennedy by David Nasaw; Rose Kennedy’s memoir, Times to Remember; and Hostage to Fortune: The Letters of Joseph P. Kennedy, edited by Amanda Smith.

As the first journalist to reveal the pre-frontal lobotomy performed on Rosemary Kennedy, I have always been impressed by how the family used that tragedy to support their commitment to mental health. The Nine of Us does not ignore the experimental surgery, which Jean Kennedy Smith writes, “went tragically wrong…Rosemary lost most of her ability to walk and communicate,” adding that her father, who had sanctioned the procedure, “remained heartbroken over the tragic outcome…for the rest of his life.”

Yet Smith omits revealing her mother’s bitterness about what her father had done without consulting her or anyone else in the family. In her book The Fitzgeralds and the Kennedys, Doris Kearns Goodwin quotes Rose Kennedy at age 90: “He thought it would help [Rosemary]. But it made her go all the way back. It erased all those years of effort I had put into her. All along I had continued to believe that she could have lived her life as a Kennedy girl, just a little slower.”

Such a sin of omission — and there are many throughout the book — mars this memoir and keeps it from being more than superficial gloss.

Kitty Kelley has written seven biographies, including Jackie Oh!, the first book to reveal that the former first lady suffered from depression and was treated with electroshock therapy and that Rosemary Kennedy survived the mangled lobotomy her father had ordered in hopes of reversing her mental retardation. In 1988, People published Kelley’s story detailing President Kennedy’s affair with a woman who carried his messages to her other lover, mobster Sam Giancana. In 2012, Kelley published Capturing Camelot: Stanley Tretick’s Iconic Images of the Kennedys and, in 2013, her latest book, Let Freedom Ring, came out. Kelley received the Washington Independent Review of Books’ Lifetime Achievement Award at the 2016 Washington Writers’ Conference.

From a journalist and art historian, an accessible guide to understanding the man and the thinker behind The Prince.