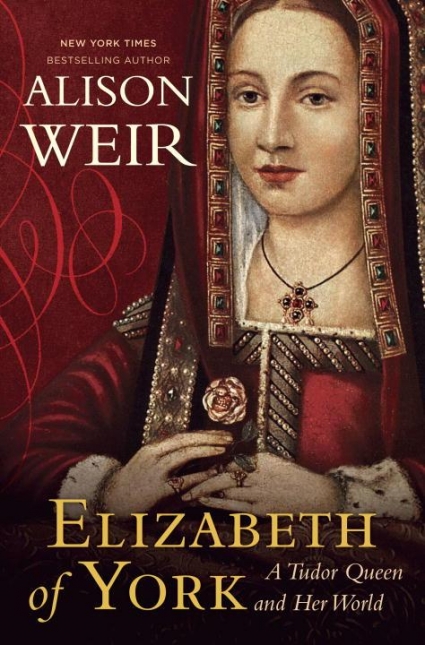 Alison Weir, a prolific historian who has previously given us more than a dozen nonfiction volumes, primarily about Tudor England, has published another look into the world of the late-15th century. She has tried, mostly successfully, to serve two audiences: nonprofessional readers with a strong interest in history, who are concerned more with facts and less, if at all, with invented conversations and (probably fictitious) sexual encounters; and professionals who want access to detail that will help illuminate a world long gone.

To many, Elizabeth of York (1466-1503), the wife of King Henry VII of England, is an unfamiliar piece of the puzzle of English lineage and history, if only because of the position of women in the medieval world. As Weir notes, “Kings were not expected to share government with their queens, or to rely on their advice, and certainly they were not supposed to be influenced by them in political matters. Medieval queens were generally the passive instruments of policy.”

But Elizabeth was crucial in two ways. First was her very lineage: because she was the daughter of the Yorkist King Edward IV, her marriage to the Lancastrian heir enabled Henry Tudor to cement his claim to the English throne and effectively end the Wars of the Roses. In addition, she was “beautiful, devout, fertile, and kind — the traditional good queen,” who provided Henry VII with what their son, Henry VIII, struggled long and hard for: male heirs. Her marriage, Weir states, “was the most successful and stable marriage made by any of the Tudors,” although the standards set by later generations were hardly high.

For many contemporaries, Weir says, Henry VII ruled neither as the Lancastrian heir nor by right of conquest following his victory over Richard III at Bosworth, but merely by virtue of his marriage. Elizabeth was the daughter of Edward IV and the sister of the two murdered “princes in the tower,” one of whom was the uncrowned Edward V. Although Elizabeth herself had a substantial claim to be queen in her own right, “it would have been unthinkable for a woman to succeed to the throne.”

Many English women of the period have drawn greater attention: Margaret of Anjou, wife of Henry VI, who fought fiercely to defend her husband’s cause; Margaret Beaufort, wife of Edmund Tudor and mother of Henry VII, whose influence helped give him the throne; Henry VIII’s six wives, especially the ill-treated Katherine of Aragon and Henry’s second wife, Anne Boleyn; Mary I (“Bloody Mary”), daughter of Henry VIII; and her half-sister, Elizabeth I, “Gloriana,” the first fully successful female ruler in English history. Daughter of a king (Edward IV), sister of a king (Edward V), niece of a king (Richard III), mother of a king (Henry VIII), and grandmother of the three heirs to follow Henry VIII to the throne (Edward VI, Mary I and Elizabeth I), Elizabeth of York was the forebear of every English monarch since her time. The present queen, Elizabeth II, is Elizabeth of York’s descendant in the 16th generation.

This book is as much a study of her time as it is of the title character and Weir has much interesting information to impart. She deals with the death of the princes in the tower and finds Richard III guilty; the question of a possible marriage between Elizabeth and her own uncle, Richard III; the political issues involved in a union of Lancaster and York through Henry and Elizabeth; the relationship between Elizabeth’s husband and his strong-willed mother; the raising of two young sons, the elder, Arthur, who expected to be king and the younger, Henry, who as Henry VIII became arguably the best-known English king in history; and, not least, the warm and loving relationship that developed between Henry VII and Elizabeth of York, as a political marriage became one of sympathy, mutual affection and even devotion.

As is common in histories of this type, the book includes a number of excellent illustrations and a very helpful genealogical table; Weir has taken a further step in providing present-day values of monetary sums quoted in the text. The 21st-century reader now can make sense of a salary of £26 [£12,700 today] per annum for the Lady Governor charged with running Prince Arthur’s nursery and put it into a modern context.

Weir has done her homework, and it shows in the immense detail she provides: “Elizabeth herself checked and signed every page of the book in which details of her income and her privy purse expenses were listed. … Elizabeth was given a lavish funeral costing £2,832.7s.3d [£1,381,000 today], far in excess of the £600 spent on Prince Arthur’s funeral, or that of Edward IV even.” And, in quoting from a letter from Prince Arthur, just turned 13, to Katherine, his as-yet unmet bride-to-be, Weir has given unprecedented vigor to a situation that no 21st-century writer could hope to improve upon: “Most illustrious and most excellent lady, my dearest spouse, I wish you very much health, with my hearty commendations. I have read the most sweet letters of your Highness lately given to me, from which I have easily perceived your most entire love to me. … I fancied I beheld your highness, and conversed with and embraced my dearest wife. …”

Despite its detailed and interesting material, in one serious respect the book thwarts scholars seeking to build upon Weir’s work. Although she includes a substantial 26-page “Select Bibliography” and 49 pages of “Notes and References,” in most instances she does not cite page numbers. Weir has done the same in other books; it remains a serious problem here. Overall, the book provides much new detail about the life and times of this often-overlooked monarch. Elizabeth of York was an enabler, a catalyst of the never-ending actions and reactions that create royal dynasties. Weir’s history successfully illuminates both the character and the period.

Arthur L. Schwarz is a book collector and independent scholar who concentrates on Tudor England. He curated the exhibition “Vivat Rex! Commemorating the 500th Anniversary of the Accession of Henry VIII,” at New York’s Grolier Club in 2009 and Washington’s Folger Shakespeare Library in 2010.