The Fight for the Four Freedoms: What Made FDR and the Greatest Generation Truly Great

A rousing history of the Greatest Generation. 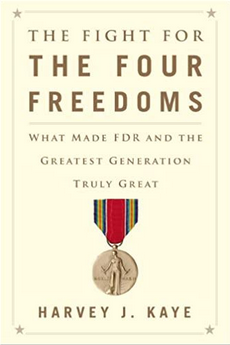 Harvey Kaye, the Ben & Joyce Rosenberg Professor of Democracy and Justice Studies at the University of Wisconsin-Green Bay, has long written about the political uses of history. His latest volume, The Fight for the Four Freedoms, aims to reclaim the World War II generation from the sentimental nostalgia that has cloaked it since Tom Brokaw coined the phrase “Greatest Generation” in 1994, a stroke of media genius that Kaye asserts, with historian Douglas Brinkley, was precipitated by President Ronald Reagan’s brilliant recasting of the World War II narrative in his 1984 commemoration of D-Day at Pointe du Hoc, Normandy.

Other historians have fought over the validity of the “Greatest Generation” mythos. By denying the ambivalence and trauma that the war experience in fact evoked, some argue, this mythos sanitizes war and denies the humanity of those caught up in it. Some simply find the notion of generational hierarchies to be ridiculous.

Kaye offers another perspective. While acknowledging the extraordinary character of the World War II generation and applauding the impulse to honor them, he urgently restates what made them great. “We can do far more to honor our parents and grandparents than once again proclaim our eternal gratitude. We can restore to them their democratic lives and achievements and recognize them for who they were — the most progressive generation in American history.”

To underpin his argument, Kaye illuminates essential connections between the New Deal and World War II, showing how triumph over the Great Depression set the stage for victory in combat. “An overwhelming percentage of adult Americans were swept up not just in four years of war, but in twelve years of struggle across fronts both foreign and domestic,” he points out. Surely war represents the most massive of all possible government-funded work projects, but that’s not Kaye’s point. America’s war-winning sense of national solidarity, of the power and possibility inherent in “We, the people,” and of government’s ability to organize that power to overcome unprecedented obstacles all began with the New Deal.

President Reagan understood the deep resonance of these words. He never stopped mentioning the Four Freedoms; he simply stopped identifying them individually. Then in a 1987 speech at the Jefferson Memorial in Washington, D.C., he remade them entirely. He announced a plan to enact an “Economic Bill of Rights” guaranteeing four fundamental freedoms: the freedom to work, the freedom to enjoy the fruits of one’s labor, the freedom to own and control one’s property, and the freedom to participate in a free market. By 1989, in his Farewell Address, he had condensed the list to three, urging Americans to remember “America is freedom — freedom of speech, freedom of religion, freedom of enterprise.”

For Kaye, American history represents the playing out of our extraordinary ideals, what he calls “the nation’s democratic impulse.” His last book, Thomas Paine and the Promise of America, located those ideals in the words of the most revolutionary of the Founding Fathers and documented their waxing and waning as Paine’s vision has been framed and reframed, fought over, ignored, subverted, or enlisted through American history. Kaye’s meticulously documented new volume does the same for the Four Freedoms, and he deploys the persuasive tools of quotation, anecdote, and statistic to compelling effect.

What matters most to Kaye is not the beauty of the ideals embodied in the Four Freedoms, but the fact that Americans of the time truly believed in them. They embraced FDR’s formulation not as a catchy sound bite but because “it accorded with their vision of country and themselves.”

Kaye pursues the influence and the abuse of that vision right up to the present. He lambastes Democratic and liberal politicians, policymakers, and pundits for, in effect, betraying the Greatest Generation by failing to fight for its ideals. His critique of President Jimmy Carter, in particular, is entertainingly scathing.

In 1940 the great poet-activist Archibald MacLeish penned the progressive sentiment: “Democracy is never a thing done. Democracy is always something that a nation must be doing.” Americans still revere the Four Freedoms, Kaye argues, pointing to President Obama’s election as evidence of that democratic impulse at work. But he bemoans the President’s subsequent compromises: “Obama did not ask too much of Americans. He asked too little.” In Kaye’s fierce vision, the Four Freedoms are not only a corrective lens through which to assess recent American history but also a vital promise, an urgent challenge, and a way forward.

Rachel S. Cox is the author of Into Dust and Fire: Five Young Americans Who Went First to Fight the Nazi Army, published by NAL Caliber in 2012. Her articles have appeared in the Washington Post, World War II, CQ Researcher, and other national magazines.