Days of Rage: America's Radical Underground, the FBI, and the Forgotten Age of Revolutionary Violence 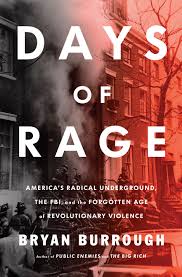 I spent much of the summer of 1974 in the back room of my grandmother’s dilapidated Chincoteague, Virginia, beach house huddled over piles of Newsweek magazines. My target: any article or picture that mentioned Patty Hearst or the Symbionese Liberation Army (SLA). At 11, I wasn't entirely clear who or what either were, but they seemed to upset the adults, and that was more than enough for me.

Bryan Burrough, in his excellent new look at two decades of underground protest movements, would probably say I was focusing on a sideshow when it came to Patty and the disjointed SLA. In my defense, the kidnapped heiress received a disproportionate serving of media attention (she was on the cover of Newsweek no fewer than seven times) relative to other, more effective cabals. Days of Rage makes it clear that the SLA shouldn't be considered anywhere near the nexus of the underground movement.

Burrough, in exhaustive but never exhausting fashion, focuses on six groups responsible for the lion's share of the age's violent protests: the Weather Underground, the Black Liberation Army (BLA), the SLA, the FALN (a Puerto-Rican independence group responsible for the decade's single deadliest underground attack), the United Freedom Front, and the Family, which consisted of onetime Weather and BLA members who carried protests into the 1980s.

For someone under 60 or so, especially one who didn't live in New York, DC, Chicago, L.A., or San Francisco, the degree of bombings, threatening communiqués, and other terrorist activities laid out in this book is probably impossible to fathom.

"People have completely forgotten that in 1972 we had over nineteen hundred domestic bombings in the United States," a retired FBI agent says in Days of Rage. "They can't believe it. One bombing now and everyone gets excited. In 1972? Buildings getting bombed, policemen getting killed. It was commonplace."

New groups and incarnations kept popping up between about 1970 and 1984, peaking in the early to mid-70s. There were spikes of activity and relatively fallow periods from a sometimes dizzying array of acronyms and loose confederations of protesters ranging from disaffected middle-class liberal whites (the Weathermen) and former prisoners (BLA), to a sometimes indistinct bevy in between.

The levels of violence also fluctuated: The Weathermen favored setting bombs off in symbols of American power, including the Pentagon and U.S. Capitol, generally inflicting few casualties. The BLA's avowed strategy was to shoot policemen in uniform. Groups also robbed banks to fund their activities and, in the case of the SLA, kidnapped.

Besides being embarrassingly ineffectual, the FBI emerges as badly as some of the groups it tried to contain. The agency's shame began with its infamous counterintelligence programs (COINTELPRO), launched in the 1950s but significantly ramped up by a panicky J. Edgar Hoover as Martin Luther King's message began to resonate, protests against the Vietnam War gained traction, and groups like the BLA and Weatherman started making public threats, backing many with violence.

"Some of us felt that what the Bureau did constituted a far greater danger to society than what the Weathermen ever did," an attorney prosecuting the FBI says in Days of Rage. "When you looked the beast in the eye, and we interviewed all of them, you got a sense of how this started out as a somewhat regulated activity that just mushroomed. [FBI agents] were going in everyone's house, mail openings, you name it. They were literally running amok."

A number of recent books make the case that, in some ways, our arguably overzealous war on terror has devolved into a similar scenario. Robert Scheer, whom I interviewed recently in the Independent, spells this out in They Know Everything about You: How Data-Collecting Corporations and Snooping Government Agencies Are Destroying Democracy.

Heidi Boghosian's Spying on Democracy: Government Surveillance, Corporate Power, and Public Resistance, a powerful study of how technological wizardry is used today to categorize citizens based on activities, associations, and even perceived political beliefs, connects the dots with a rueful look back at the historical period covered in Burrough’s work to call out COINTELPRO.

The agency's Big Idea to fight domestic threats "brought shame to the reputation of the bureau, and for good reason...[it] illustrates the ease with which domestic intelligence initiatives can escalate to warlike counterintelligence maneuvers, employed unlawfully and with total impunity,

Burrough keeps his own editorial comments to a comparative minimum. He trusts readers to digest information and draw their own informed conclusions. If he has a mission, it is simple: We should not forget what happened during what he terms our first "Age of Terror."

It would appear we are failing. The Weather Underground has been the subject of a few books and movies but isn't widely remembered. The BLA and others groups are essentially forgotten. And Patty Hearst? She went from sideshow to kitschy freak show, known today, if at all, as a stilted cameo performer in several campy John Waters’ films.

I probably missed the real story back in 1974. But I'll give myself a pass because I was a kid. I don't have that excuse today. Neither do any of us. And for that, we have Bryan Burrough and Days of Rage to thank.

Michael Causey, an amateur and very rusty historian of Patty Hearst and the SLA, is also a past president of Washington Independent Writers.