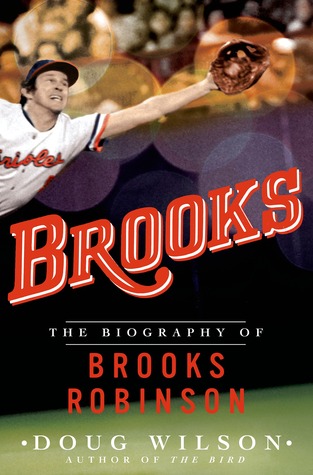 If you’re old enough, and were paying attention to baseball in the 1960s and 70s, chances are you remember Baltimore Oriole third baseman Brooks Robinson as a defensive virtuoso — maybe the best ever at his position — with a reputation as a hard-not-to-like, all-around good guy.

All these years later, Doug Wilson doesn’t have much to add.

Early on … very early, in the second paragraph of the preface to Brooks … Wilson speculates that other potential biographers were likely dissuaded by the apparent absence of conflict, controversy, or drama — beyond the occasional batting slump — in Robinson’s life.

Then he spends 293 pages demonstrating the wisdom of those decisions.

And if a lot of Brooks — including chapter headings like “Glove Wizard” and “Everybody liked Brooks” … reads as if it was taken straight from pages of The Sporting News back in the day, that’s because Wilson, an ophthalmologist by trade, spent considerable time mining newspaper and magazine archives, and made a conscious decision not to interview his subject for this hagiography.

So, here’s Paul Richards, the Oriole general manager, telling reporters his 19-year-old rookie has “the best pair of hands I’ve ever seen on a third baseman.”

And, a paragraph later, Robinson’s minor-league manager, Joe Schultz, telling another writer his protégé has “the finest pair of hands I’ve ever seen on any third baseman.”

Just in case you didn’t believe Richards the first time.

And did we mention ol’ Brooks is a nice guy?

In Robinson’s world — or, in this case, Wilson’s — not much ever goes seriously wrong. Everybody really does like Brooks, and even the black folks back in segregated Little Rock, Arkansas, are content living on their side of town. (Never mind that two years after Robinson graduated, President Dwight Eisenhower had to send the 101st Airborne to enforce integration at Little Rock Central High School.)

In his 23 years in the big leagues, Robinson leads the onetime laughingstock Orioles to two World Series championships, collects 16 Gold Gloves and an MVP award, and draws the biggest crowd ever at his Hall of Fame induction. He also gets along with everybody, even umpires and his sometimes prickly teammate Frank Robinson, and is universally admired in Baltimore, where not one but two statues speak to the city’s abiding affection.

Among John Updike’s many famous lines is his explanation of Ted Williams’ refusal to acknowledge the cheering masses: “Gods do not answer letters.” By contrast, this baseball idol not only responds to a request from a total stranger to borrow his uniform for a social occasion, he arranges to loan her the shirt off his back.

It’s almost a relief, then, when we learn that like so many of the greats in their athletic dotage, Robinson doesn’t know when to quit. He hangs on, even after his batting average dips below the .200 mark and the Orioles replace him at third base with the less-than-legendary Doug DiCinces. It turns out Robinson may need the money, after his sporting goods business goes belly-up.

None of it dims the ardor of the hometown fans, as summed up by Associated Press sportswriter Gordon Beard, a Baltimore native, playing off Reggie Jackson’s conceit that if he played in New York (which he eventually did), they’d name a candy bar after him (which they eventually did).

“Nobody’s ever named a candy bar for Brooks,” Beard tells the crowd at a Thank Brooks Robinson Day celebration in Baltimore. “Around here, we name our children after him.”

Jay Price, a longtime columnist for the Staten Island Advance, is the author of Thanksgiving 1959. He lives in Manasquan, N.J. and is working on a book about the town’s experiences in the days after Hurricane Sandy.