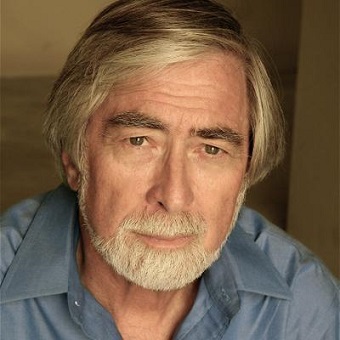 Robert Scheer, a widely respected investigative journalist and editor-in-chief at truthdig.com, is doing his best to make us stop absently "liking" pictures of our friend's new Eileen Fisher dress or declaring an online allegiance to Nutella. Instead, he begs us to think about what we're giving away. His new book, They Know Everything about You: How Data-Collecting Corporations and Snooping Government Agencies Are Destroying Democracy, paints an ugly picture of government and corporate manipulation and citizen ignorance in cyberspace.

"Americans had fought and died for the right to have privately developed papers, conversations, friendships, and diaries, especially in our homes," he writes. "Yet here we were as a society voluntarily moving so much of that into digital spaces owned and managed by corporations we have no control over."

We spoke on the phone the day the Guardian newspaper reported that the European Union (EU) advised Europeans to get off Facebook if they didn't want to be spied on by American security services. Our recorded conversation was edited and condensed for space and clarity.

So, what's happening in the EU? Is it significant?

When you say, "pushback," you mean Apple and Google are pushing back against the U.S. government?

Yeah, you're getting pushback from two sources. You're first getting pushback from customers around the world or the multi-national corporation saying, "Can we trust an American-based company when they're under the thumb of American-based [security] agencies?" So that's the argument used in China for keeping Google out, saying, "Let's prefer our home-grown companies." The [EU] has been pushing back saying, "No, we won't let Google trucks go around and photograph all these houses and we'll put restraints on it, because they're not a neutral, multinational corporation, they're actually quite invasive on behalf of the American government."

That has caused Google and Apple and Facebook and [other] companies to be very concerned about the liability of their business model. [It's] dependent upon [customer] trust that [data] will not be misused. And they're saying, "Wait a minute, you know, we're multinational corporations. All we care about is making money." And if you can't deliver on that [trust], if you can't protect your customers out there because you're under the thumb of some American surveillance agency, that causes a lot [of concern].

You cover it in the book, but can you talk about Edward Snowden's impact?

Well, the main thing that Snowden did is [in] the volume of what he released. There were bits of information trickling out, you know, continuously, about what the government is up to. Even before 9/11, we had programs and so forth that people were [exposing], and the government would deny it and these companies would deny it.

So, until Snowden came along, we had information that could be dismissed and what Snowden did, [by releasing such a volume of material] about the PRISM program and the other programs, it became irrefutable and as a result it put these companies on the spot. Of course, their response was, "Well, we didn't know or we didn't have knowledge or we were forced to do it." But the questions kept coming, you know, "When did you know?" and "It looks like you did cooperate." And that's why these companies, particularly internationally, were put into a difficult position.

You know, if Angela Merkel can have her cellphone tapped, well then what are ordinary citizens to think?

Earlier, you told me the Washington Post was going to review your book, then said it wasn't. Do you know what happened? Of course, the Post is now owned by Jeff Bezos, and you hit him in the book.

Yeah, well, I was told [in mid-March] that the Washington Post was going to review my book, and they asked for a cover picture and everything. Then they decided not to review it, and I really wonder. I criticized Jeff Bezos, I say, "He's buying the Washington Post and at the same time, creating a [big data storage] cloud for the NSA and CIA, [and it] presents a conflict of interest." Now, I don't know whether that weighed into their decision to not review the book, but it is the kind of conflict of interest that I think should be concerning.

I'm not saying that I know why. I'm just saying that [there's cause for alarm] when you have a company like Amazon, that has lots of access to our private information and they're into data mining, that's what they do, but they're also partners with the government in this massive build-out of government surveillance, and [Amazon has] huge contracts. This is what Eisenhower and myself warned about in the military-industrial complex's undue influence. Its excessive influence, its conflict of interests. As he pointed out, the military-industrial complex was in every congressional district, in every sector of the economy, and it distorted the basic civic experience of society.

I kind of wish he'd made that speech well before he left office instead of on his way out the door, but I see the importance of it.

Well, I can lift a hat to Eisenhower. I think he was one of the better people in terms of openness and honesty about military decisions. Remember, Eisenhower was the one who opposed dropping the bombs on Hiroshima and Nagasaki and warned there should be a proper discussion. I'm not going to go into a whole long defense of Eisenhower, but I think he had some good, strong points, too.

I didn't know that. Okay, talk about this term you coin in the book, "military intelligence complex."

Yeah, I changed military-industrial complex by saying we should be thinking of the military intelligence complex because that's where the big money is going to be made.

Is a military intelligence complex as scary as it sounds?

Oh, yeah. Well, the scary thing that Eisenhower pointed out was when you're making a lot of money off this stuff, and you're also the people defining the threat, then you might have a reason to inflate the threat. Whether it's the threat of communism or the threat of terrorism, you're selling stuff, you're manufacturing stuff. Think about it: The whole excuse for all of this data-mining is to find these needles in the haystack and everything. Well, if you're part of describing the threat, defining the threat, and you're also making money off meeting that threat, you have a conflict of interest.

In the book, you talk about an NSA whistleblower, William Binney, and his quote about the NSA's business model, "Keep the problems going, so the money keeps flowing." That's what we're talking about, right?

Yeah, exactly, and you know what he tried to do, [he and others] got into trouble...because they tried to save us money. They tried to make [the NSA] more responsible, more restrained in its impact on privacy, and they couldn't get anybody to pay attention. And they went through what they thought were channels, they gave that information to [a] congressional committee, and so forth. And the thing is, it's so depressing that people don't make more of this. The only people who have been punished for revealing classified information are people that give [us] this information we have every right to have. And need to have.

[Editor’s Note: Robert Scheer will be in conversation with former congressman and presidential candidate Dennis Kucinich at Busboys and Poets in Takoma, DC, on April 22, at 6:30 p.m.]