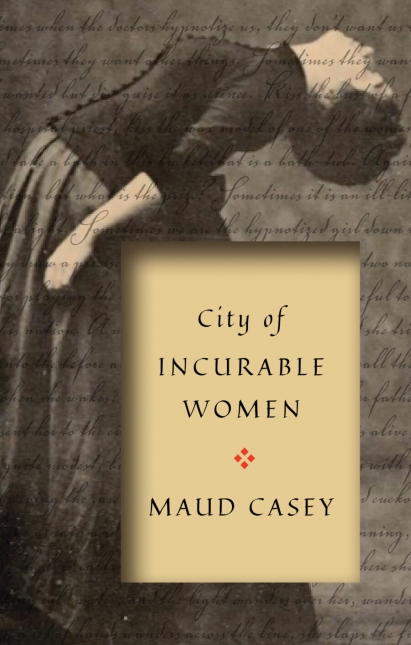 Maud Casey has found a wealth of inspiration in the relationship between 19th-century French doctors and their psychiatric patients. Her 2014 novel, The Man Who Walked Away, concerned a doctor-patient relationship at the St. André in Bordeaux. Her new book, City of Incurable Women, is set in Paris’ Salpêtrière Hospital, where real-life neurologist Jean-Martin Charcot once treated female hysterics. It’s a collection of stories narrated by his best-known patients and interspersed with photographs, case notes, and medical documents of the period.

In the late 19th century, the hysteria diagnosis was all the rage. Symptoms ranged from fainting spells and convulsions to sexual compulsiveness and fluid retention. According to a “Report on the Service of the Insane of the Department of the Seine in the Year 1877” cited by Casey, there was “one doctor for every five hundred patients and the rate of cure was 9.72 percent.” Charcot believed hysteria was a disease of the female reproductive organs. Spasms and writhing might coincide with menstruation, but Charcot controlled them with ether, chloroform, or morphine.

Also, the use of an ovary compressor. More on that later.

City of Incurable Women opens with the story “The City Itself.” In it, an unnamed patient/narrator describes Salpêtrière and the death of Dr. Charcot. As the great doctor lies in state, his patients finally get the chance to study him as he once studied them. They feel vindicated. But in addition to questionable treatment, the Salpêtrière also offers entertainment. The narrator tells us:

“In the courtyard, sometimes there are masked balls where famous scientists and artists and doctors dress as robed monks, musketeers, knights in armor…On those nights, the great pavilion is strung with fairy lamps, colored lanterns, flowers, and streamers, and we dance as though we are Jane Avril at the Moulin Rouge and then, look there is Jane Avril.”

The narrator’s dreamlike description isn’t suited to getting the facts. It sounds unreliable. “In the before we were daughters, daughters of all sorts of people who themselves were the sons and daughters of all sorts of people, and so on.” There are the best girls and the un-best. The best are “lifted up out of the crowd and slipped between clean sheets in a private room where there are windows to open and close and quiet to hear their thoughts.”

The un-best aren’t so lucky: “Sometimes, restlessness made us naughty, or we suffered from utopian urges, which made us restless too.”

In the next story, we learn about “delicious Augustine,” who looks back on her years as a celebrated hysteric, having escaped the asylum dressed as a boy. We read about Genevieve, too, the victim of sexual abuse and a phantom pregnancy:

“You threw yourself around the room and hoarded belladonna pills, but they brought you back from death to save the child, who turned out to be imagined. Lost, then found, then lost again, you began to walk as if you could walk right out of that body so insistent on living.”

These fragmentary narratives are told by socially disadvantaged women. Misogyny and sexual repression conspired against them. Quack doctors treated them like circus freaks. Among other things, we learn about the misuses of hypnotism:

“Sometimes when the doctors hypnotize us they don’t want us to kill them endlessly. They want other things…Again we understand the competition but what is the prize?”

Morbidly fascinating photographs, case notes, and medical jottings (some fabricated) fill gaps in Casey’s narrative. There are stylus tracings across a patient’s chest and logs detailing the various therapies administered. I still can’t wrap my mind around the aforementioned ovary compressor — a girdle made of leather. (Or is it metal? You can’t tell from the picture.) It features a weighted shaft used for applying pressure to the abdomen and looks like a medieval torture device.

One of Charcot’s lectures is captured in André Brouillet’s painting “Une Leçon Clinique à la Salpêtrière.” In the picture, scholars consider a female patient swooning into the arms of a man behind her. Her bodice slips from her shoulders. Beside her, Dr. Charcot pauses as though mid-sentence.

The clinical pretext provides a thin veneer for sexual titillation and voyeurism. Casey’s endnote tells us that “Anna Freud wrote of the image ‘It held a strange attraction for me in my childhood and I often asked my father what was wrong with the patient. The answer I always got was that she was too tightly laced.’”

Since the stories are disjointed, I often had to reread them to understand what was going on. The language kept tripping me up. Some tales are like character sketches or cleverly executed writing exercises. “A Heartless Child” is the bare-bones outline of a story. Blanche’s “Father, Ether, Sea,” punctuated with the phrase “let me begin again,” has a looping quality. And “Never the Same Way Twice,” told by Jane Avril, who in real life danced at the Moulin Rouge and modeled for Toulouse Lautrec, has a lyrical tone indistinguishable from other chapters. It’s as though Casey is channeling the hysteria itself. This is an interesting choice but tends to obscure the subject rather than elucidate it.

So, to get a grasp on the facts, I read Asti Hustvedt’s Medical Muses: Hysteria in Nineteenth Century Paris, which Casey cites in her acknowledgements. With her book, Hustvedt “set out to write a nonhysterical book about hysteria,” and succeeded.

Medical Muses is a nuanced, meticulously researched, and engaging explication of the Salpêtrière and Charcot’s work. For many women, Hustvedt explains, the place was a sanctuary. Some even faked symptoms to gain admission and achieve stardom there.

Augustine, Blanche, and Genevieve were Charcot’s stars, and Hustvedt writes about them in detail. Charcot’s lectures, which included patient demonstrations, were “attended not only by medical students and doctors but also by members of the general public. The Salpêtrière became a fashionable place to visit; it even became a destination for tourists.”

Casey clearly relied heavily on Hustvedt’s book while writing City of Incurable Women. But in her reframing of historical events, she left out some uncomfortable truths that make the story of the facility much more complicated.

It wasn’t, in fact, a simple matter of misogynist doctors treating susceptible women with brutal cures. Hustvedt writes that Charcot, who called the Salpêtrière “that grand asylum of human misery,” was progressive for his time. “Where others saw a professional deadend, Charcot saw opportunity…[He] reorganized the Salpêtrière transforming the outdated hospital for epileptic, insane and aging women into a modern medical institution complete with laboratories teaching facilities and separate wards.”

Charcot’s patients had the odds stacked against them but made the best of it. “Blanche was not a conniving fraud who deceived the great neurologist, nor however was she the passive victim of a misogynist doctor,” Hustvedt writes. After Charcot’s death, “Blanche was essentially out of a job…She was later transferred to the radiology laboratory where she worked as a technician.”

Back then, nobody understood the dangers of radiation, and Blanche tragically died from exposure to it. Hustvedt explains that the “last information that exists concerning Blanche comes from an article by a doctor named Baudouin…He met Blanche, whom he knew by reputation, in the radiology laboratory. She was, he claims, still quite haughty, capricious, and moody, but she no longer suffered from hysterical attacks. As he explains, ‘she was one of those hysterics who had had their moment of fame,’ but when hysteria was no longer in fashion, ‘she had abruptly stopped having fits.’ Blanche, he relates, was very reluctant to talk about her life as a hysteric.”

“Sometimes the doctors would put me to sleep and subject me to certain influences. I forgot who I was, my age, my sex, my nationality. I forgot when I was and why. I lost the idea of my late existence. Even still, I was not abandoned, only unfortunate. I was not abandoned, only unfortunate. That boat was in no hurry to get anywhere at all. Where was it going? It moves still, across the infinite, and everyone still and always here.”

Augustine’s case is still more intriguing. Photographs of her illustrating the stages of hysteria are reproduced both in Medical Muses and City of Incurable Women. Perusing them, you sense she struck her postures to communicate a version of the pain she had suffered. It was her way, in a sexually repressed society, of taking control of her narrative.

Casey quotes André Breton and Louis Aragon, who used Augustine’s photographs in an important exhibit: “We, Surrealists, insist on celebrating here (in 1928) the fiftieth anniversary of hysteria, the greatest poetic discovery of the end of the nineteenth century.”

It’s Hustvedt’s book that provides context. “Since that resurrection in 1928, Augustine’s story and her photographs have been an inspiration to historians, playwrights, choreographers, visual artists, performance artists, and filmmakers.” She lists a slew of them in detail, up to a play in 1991 and choreographed interpretations in 2004 and 2007.

“These are only a few of the works that Augustine inspired,” Hustvedt continues. “In the end, not one of them, no matter how much poetic license they take, outperforms the true story of a sexually exploited girl who became Charcot’s most photographed hysteric and then, after years of submission, fled the hospital and male medical authority, dressed as a man.”

No wonder Maud Casey was inspired by the story. The material is a gold mine, and her refashioning of it in City of Incurable Women is certainly relevant in our era of #MeToo. But sometimes fiction doesn’t do justice to the facts. If you’re interested in those, Asti Hustvedt’s Medical Muses is indispensable.

A rollicking, imperfect thriller that may play out better on the big screen.