A bad-girl barrister tries to find justice before it’s too late in this formulaic thriller. 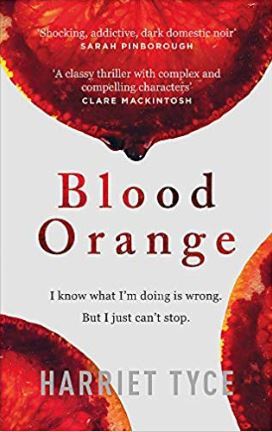 The debut novel Blood Orange hews closely to certain creaky conventions of the Girl on the Train school of popular fiction. By day, its married heroine, Alison Bailey, is a workaholic, briskly competent criminal barrister in the English court system. After hours, she’s a fall-down drunk entangled in an adulterous and abusive affair with the senior solicitor supervising her cases.

Forewarned is forearmed. Throw in with Alison, and you will likely careen from admiration to guarded empathy to gut-clenching alarm as she totters from chambers to pub-culture London to dank back-alley love nooks.

Married to a sententious fussbudget of a husband, with a young daughter, Alison falls a tad short on the attentive-mother scale, as well. Still, she’s not unaware of her shortcomings and regularly resolves to cut back on the drinking, ditch the boyfriend, and pull the young-professional-mum thing together.

As the novel opens, her lover-supervisor, slick and bespoke, has assigned Alison a murder case to defend — her first. It centers on a posh socialite, mother to a teenage boy, who’s charged with stabbing her husband. Problem is, the defendant — despite some evidence to the contrary and Alison’s sharp but fading instincts — stubbornly insists that she did it.

We’ve already seen Alison in cringeworthy action. So, like many readers of the successful-woman-gone-astray genre, we’re invested, if a little begrudgingly, in Alison’s prospects for reform. And because there’s so much at stake — both in the courtroom and in her story arc — we can’t help but suspect that she will, despite setback after apparent setback.

True to the blueprint, Blood Orange chronicles Alison’s emergence from a dispiriting miasma of missteps and self-doubt, handsomely paying off our empathy. If this is a spoiler, it’s a trifling one, given the predictable narrative formula to which this clearly talented writer has yoked herself. After all, she’s got a chart-topper to write, not a literary lodestar.

Even so, author Harriet Tyce deserves credit for telling Alison’s story with admirable attention to atmosphere, characterization, and suspense. She vividly depicts the English court system, which may be new in its intricacies for American readers — as well she should, having herself spent nearly a decade as a criminal barrister.

Tyce also orchestrates Alison’s Sisyphean exertions to recover with a skillful command of narrative suspense, never teasing us with the temptation to give up on her as misfortune keeps snapping at her heels.

All in all, the author’s female characters are keenly observed and compellingly portrayed. They speak with authentic cadences. There’s nothing off-key or forced in their language, even when they’re lying. This is equally true of Patrick, Alison’s despicable supervisor, who comes to face his own personal and legal challenges as the story unfolds.

On the other hand, Alison’s husband verges on the stereotypical. He’s at least as deplorable as Patrick, but there’s something rigidly formulaic in the way he acts and talks, coming across like a smarmy refugee from the Lifetime Channel’s catalogue of passive-aggressive — and outright aggressive — husbands and lovers.

But despite the bitter circumstances arrayed against her heroine, Tyce pulls off a gob-smacker of a reversal in Blood Orange’s final moments. It elevates this book from seamy law-office melodrama to respectable thriller.