The author’s first collection sets a surreal world spinning on an axis of displacement. 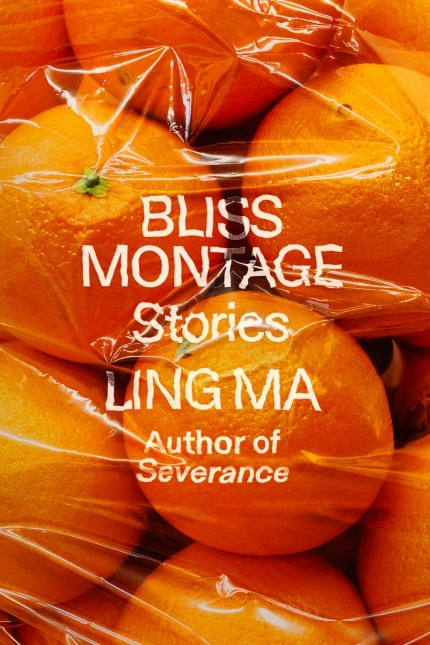 The characters in Ling Ma’s Bliss Montage navigate a slipstream version of Earth as we know it; tales of recreational drugs with superpower side effects or foreign lands with strange rituals of rebirth are tempered by sharp and familiar domestic details. Each story adds to recurring themes of immigration and violence that reflect the book’s deepest questions; Bliss Montage is an inquiry into origins and dislocation.

In the first story, “Los Angeles,” a woman lives with her husband, her kids, and her 100 ex-boyfriends. They float around her property and her thoughts like ghosts. The woman’s description of her young children is our first glimpse of the tactful lyricism Ma deploys throughout the book:

“At night, they crawl into my lap, full of easily disclosed secrets, light as folding chairs.”

It’s a lovely sentence that captures the elegance and logic of all eight stories. To read them is to enter a world where strangeness is a language with a grammar all its own, and total immersion the only path to fluency. Ma’s use of unreality is a terrific refashioning of the Freudian uncanny — in this case, the idea of the estranged familiar — superimposed over tales of immigrants, ex-partners, and adult children.

In “Oranges” and “G,” two women revisit past relationships — one with an abusive ex-boyfriend, and one with an obsessive friend of her youth, respectively. The boyfriend in “Oranges,” it seems, would like his wronged former partner to be invisible, which is not exactly what ends up happening. In “G,” it’s the opposite: One infatuated friend understands that invisibility, in a high enough dose, can bond people together with uncommon strength. Describing her controlling friend, the narrator explains:

“It doesn’t take much to come into your own; all it takes is someone’s gaze. It’s not totally accurate to say that I felt seen. It was more that: Beheld by her, I learned how to become myself. Her interest actualized me.”

It’s interest that actualizes one of Ma’s strangest stories, “Yeti Lovemaking.” In it, the narrator leaves a wine bar with a yeti (that’s right) who is polite, patient, and prone to smoking American Spirit cigarettes. The theme of hiding bubbles up in the yeti’s apartment when he asks his date if she knows what it’s like having always to hide one’s true nature. As with most questions asked in the story, this one goes unanswered. A reader seeking clarity might not feel at home here.

Feeling at home isn’t always an uncomplicated emotion, however, as “Returning” demonstrates. An eerie take on the adage, “You can’t go home again,” it follows a young woman who travels with her husband to his homeland to partake in an unusual ritual. It is a tale dotted with anecdotes and myths that touch upon the title, including a graphic novel authored by the protagonist’s colleague entitled Arrival Fallacy. This is one of Ma’s longer, more philosophically rich offerings.

“Office Hours” and “Peking Duck” set gender roles and racial dynamics against a backdrop of the uncanny. In the former, as in the rest of the stories, this uncanny is established via the explicitly unusual — a portal in an academic department — paired with a familiar trope that grounds readers. Here, it’s a charged student-professor relationship and a collection of oddities that echo through a career. The latter story explores origin and echo in the context of stories that shapeshift depending on the teller. It orbits a Chinese American immigrant family’s encounter with a threatening stranger, and the ways in which this narrative is shaped over time, retelling, and repression.

In the final selection, “Tomorrow,” a pregnant woman experiences a bizarre (though harmless, her doctor insists) medical anomaly that leaves “a baby arm” dangling outside of her body. It is a strong story to close out a collection that deals so exquisitely in breaches of reality and in the challenges presented when one is stranded between two worlds.

In film, a bliss montage is a set of quick-succession images aimed at building a visual fantasy. Yet the characters in Ma’s stories do not live in a paradise, nor do they seem to yearn for one. Rather than skate across the surface of a place or a time, they tunnel deeper and deeper. As the scholar Jeanine Basinger, whom Ma thanks in her acknowledgments, writes in A Woman’s View: How Hollywood Spoke to Women, 1930-1960, the bliss montage encapsulates “the rapid and brief time in which a woman can be happy.”

But Ma’s women are not enjoying the early days of marriage before their inevitable demise; joy, for them, isn’t limited to snapshots of white satin and martinis, picnic blankets and fireworks. Instead, the poles of these bliss montages are the before and after periods that relate to a sense of belonging — not to men, but to one’s own origins. These stories, from their thoughtfully charted plots to their clear, compact sentences, are written with the wisdom of a traveler — unlikely to come apart and paired down to the essentials, which Ma knows include not only practicality, but beauty and strangeness, as well.

Molly McGinnis works as a research coordinator in medical ethics. Her writing has been featured in Guernica, CQ Researcher, Poet Lore, Hobart, and elsewhere. She lives in Washington, DC.