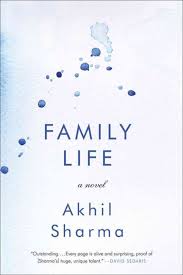 Family Life, Akhil Sharma’s second novel, has been labeled as “immigrant fiction,” which filled me with misgiving. I’ve noticed that authors who have been branded in this fashion tend to translate one culture (the one left behind) for the consumption of another. This would be quite all right if they didn’t habitually fall into traps such as exaggeration and oversimplification in order to achieve their ends.

When I read the blurbs on the back cover, an additional layer of doubt, combined with a feeling of wild optimism, engulfed me: “Family Life is a terse, devastating account of growing up as a brilliant outsider in American culture. It is a nearly perfect novel,” according to author Edmund White.

A nearly perfect novel? The last time that description was aptly used, the subject was E. M. Forster’s Howards End.

Well, five minutes in, I surmised the blurbs were in all likelihood reasonable. Ten minutes later, I knew I deserved a smack for entertaining skepticism, fueled by generalizations I had framed in my head.

Sharma’s literary hero happens to be Ernest Hemingway, and he has taught himself a lesson or two from that fountain of pared-down, essential prose. Consider Sharma’s description of New Delhi vegetable vendors in the ‘70s as people who “came pushing their carts down the street in the late afternoon, crying out their wares in tight, high-pitched voices.” The use of the word “tight” in conjunction with “voices” is the very essence of Hemingwayesque prose, which quenches our unconscious thirst for linguistic nourishment.  This sentence-level originality is evident in generous quantities throughout the novel.

There’s also the incisiveness of the observations themselves: “In India, though, temples also smelled of flowers, of sweat from the crowds, of spoilage from the milk used to bathe the idols. [In America], along with the smell of incense, there was only a faint odor of mildew. Because the temple smelled so simple, it seemed fake.”

The novel’s narrator is Ajay, 8 years old when the story opens, who, along with his older brother Birju and their parents, leaves New Delhi and moves to Queens, NY. Their initiation into American life – the awe they feel when encountering the sliding glass door leading into their apartment building, being told in school that they smell weird, the hours and hours of study Birju puts in to get accepted into the Bronx High School of Science – are the precious, happy times. Fifty pages into the novel, a terrible tragedy befalls the family. Birju hits his head against the bottom of a swimming pool while diving, which leaves him permanently brain-damaged.

The daily routine of taking care of a severely brain-damaged person (lifting and placing him in the bathtub in order to bathe him, for instance); the alcoholism that consumes the father; the mother’s reliance on quackery; the anger and arguments that shake the walls of their house; the lies young Ajay begins to spout helplessly in school, which his classmates can see through, are the subjects of this novel. These ought to make us squirm, even abandon the book, but the opposite happens. The fact that this grim novel is so engaging, un-put-downable really, is nothing short of a miracle. It took Sharma some 13 years to write this slim volume because he has put his soul into making it work. And it does.

Upon finishing the book, I began to think that if labeling it were absolutely necessary, I would have chosen “novel of despair.” What makes the story especially deep is that the redemption, if there is one at all, is not easy or simple. Incidentally, much of what transpires in the novel has actually occurred to the author’s family. But that’s immaterial. What’s on the page and how well it flourishes there are what matter. Far from stereotypical “immigrant fiction,” Sharma’s imagined reality makes us ask profound, uncomfortable questions about existence itself.

Ananya Bhattacharyya is a Washington-based writer whose essays and short stories have been published in the New York Times, the Guardian, Phoebe, So To Speak, and Washington Square Review. She is an assignment editor at the Washington Independent Review of Books.