Arizona Moon: A Novel of Vietnam

An action-packed story that peers into the culture of Marine combat. 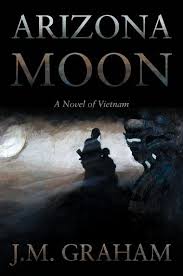 J.M. Graham knows combat. He doesn’t flinch at gruesome descriptions of the destruction to the human body when men fight each other to the death. Arizona Moon begins with combat on the first page and doesn’t let up until the epilogue.

It's October 1967. The setting is Quang Nam Province, in the central coastal region of South Vietnam. The Marines are trying to clear “the Arizona,” a swath of land on the western side of the province, close to the Laotian border. When they tangle with the infiltrating North Vietnamese, a fight to the death ensues.

Graham shows us the forces on both sides of the conflict, and the reader gets to know individual combatants. Among the Marines, the most prominent are Ray Strader, called “Reach,” who describes himself as a city boy, and Kle-ga-na-ai (“Moon”), an Apache tribe member, whose Marine nickname is “the Chief,” a moniker he dislikes.

On the Vietnamese Communist side, we meet Nguyen, Pham, Truong, Sau, and several others — all North Vietnamese infiltrators struggling to transport weapons to the south. Throughout the narrative, the author uses the “God’s eye” or omniscient point of view, so that the reader sees the inner thoughts of all characters, creating a tapestry of viewpoints that’s almost too rich to digest.

Reach and the Chief become separated from their unit early in the narrative, and much of the story is about their attempts to stay alive while surrounded by North Vietnamese forces in the foothills of mountains along the border. The Chief is severely wounded. Reach leaves him briefly to seek out their squad and get help, then reconsiders and returns to their hideout only to find that the Chief is no longer there.

The North Vietnamese wish to avoid American forces so that they can deliver the much-needed armaments they are carrying. They leave the harassment of the enemy to the Viet Cong battalion operating in the same area. Despite their efforts to stick to their mission, they continue to bump up against the U.S. Marines who, in the beginning, don’t even know that the North Vietnamese are in the vicinity.

The result is unceasing action. Graham moves from group to group in the narrative, showing the reader what is happening with each element engaged in the conflict. Because both the Marines and the North Vietnamese operate in small unit groups, the story jumps from location to location as the fight intensifies. Only at the very end of the book is it clear which side has prevailed and at what cost. And it is only then that the full meaning of the book’s title becomes apparent.

Like many other writers (e.g., Phil Klay in Redeployment and Clinton Romesha in Red Platoon), Graham uses military jargon and slang with no explanation of the meaning. But thanks to context, even readers with no Marine connections will soon decipher the patois. On the other hand, Graham is a gifted and well-schooled writer with a distinct knack for novel phrasing. Occasionally, the Marine argot and sophisticated phraseology get in each other’s way.

And Graham’s Marines, like the Marines I worked with in Vietnam, show a genius for expressing themselves in imaginative use of the seven common dirty words plus a few most readers will have never encountered before. Every troop below the rank of sergeant has a nickname conferred by his fellow Marines, often with earthy connotations.

In short, Graham knows his Marines and portrays their lingo accurately.

On the whole, this is a satisfying read, especially for those of us addicted to combat stories. But the novel is not devoid of flaws. Graham and his editors are not experts in the Vietnamese language and borrowed terms from French, and errors are frequent.

More important from the point of view of American readers is the sometimes confusing narrative. Because of the large number of characters and the lack of individual characteristics, I had trouble remembering who was who. The problem was compounded by the author’s technique of moving rapidly from one group to another within the same time frame. More than once, I had to backtrack to figure out what was going on.

These complaints won’t matter to readers who are not linguists or experienced combatants. The novel works. As a tale of Marines in combat in Vietnam, it comes alive. Most important, it portrays combat as it really is, without glorification or shying away from its ghastliness. In that respect alone, Arizona Moon is a noble effort.

A woman’s journey from call-center worker in Mumbai to successful American Desi is told in linked stories.