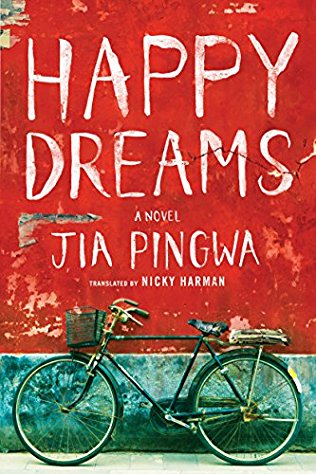 Hawa Liu is a struggling peasant in rural China, where marriageable women are scarce. When a matchmaker tells Liu he needs money to find a wife, he sells blood. When he’s told he needs a house, he sells a kidney.

In the end, though, he is unable to find the right woman and, like so many of his disaffected countrymen, Liu migrates to the big city to find work and some glimmer of hope. Arriving in Xi’an, he is so full of optimism that he decides he will henceforth be known as Happy Liu.

Happy Dreams, a novel by Jia Pingwa and translated from Chinese by Nicky Harman, is Happy Liu’s story. It is also the story of modern China, where the flow of labor from rural to urban areas has continued unabated for decades and is arguably the largest such migration in history.

Despite Liu’s aspirations, life for the migrant laborer is extraordinarily hard. He is exploited by employers and treated harshly by law enforcement. Living hand to mouth in unsanitary and unsafe housing, he works long, back-breaking hours and still barely scrapes by. But what choice does he have? In the novel, as in contemporary China, there are few options.

Life in the city is very different from that of Liu’s home village of Freshwind, where everyone knows each other:

“When you saw the hen with the tufted crest, you knew who it belonged to. And looking at the sow, her tail stuck out because she was about to crap, you knew where her house was too. And that old man carrying a grandchild on his shoulders, you knew perfectly well whether the grandchild was his daughter’s or his son’s…”

In Xi’an, it’s easy to get turned around in an unfamiliar neighborhood, and the crowds are a sea of unrecognizable and unreliable faces: “Our feelings toward each other bound us together in Freshwind, but only law or money bought trust in Xi’an,” Liu reflects.

We first encounter Liu as he’s being arrested by a Xi’an policeman for attempting to enter the train station with a corpse. As it turns out, the dead man is Wufu, Liu’s friend and sidekick from his home village, with whom he’d come to Xi’an to find work. Having promised his friend to take him home if he should die, Liu is only trying to do the right thing.

In flashbacks, the novel then recounts the adventures of the friends: how they came to the city, found jobs as trash-pickers and homes in neighboring hovels, and struggled together to feed themselves, as well as how Wufu died.

Both Liu and Wufu are charmers. Wufu is a crude simpleton, dependent on his younger, smarter friend for guidance as they navigate the city’s many obstacles for migrants. He has a wife and three sons back home and saves most of the pittance he makes to supplement what his family can earn from their meager plot of land in Freshwind.

Liu, though wiser and more educated than his friend, is just as naïve. He is too trusting of nearly everyone as he attempts to become a “Xi’an man.” He believes that this is his destiny; that through hard work and careful planning, he will rise up and become a respected businessman like the well-dressed men he sees on the streets of Xi’an.

Liu has other dreams, as well: He hopes to find a wife. He even believes he has found his match in Yichun, another migrant who, it turns out, has her own struggles in the big city. When he hears her hard-luck story, Liu is eager to use his savings to bail her out. What are his dreams good for if he can’t help the woman he loves? He also hopes to find the recipient of his transplanted kidney, with whom he feels a spiritual kinship. He knows nothing about the man but is sure he will recognize him when they eventually meet.

The Chinese version of the novel is simply entitled Happy. The English title, though, suits the novel well. Liu’s dreams, while happy, may be somewhat unrealistic. Is the author making a prediction about China’s future? Could it be that the rapid economic development that has left so many behind is doomed to create a permanently disaffected class? If Liu fails in his dream of becoming a Xi’an man, is there any hope for the rest of China’s migrants?

The China depicted in Happy Dreams is not one that will be familiar to Western tourists who are typically shielded from the country’s underside. Xi’an is known for its terracotta warriors, after all, not for the small army of men and women who scavenge trash from every corner of the city. Those with more than a superficial knowledge of the country, however, will recognize the novel’s brutal honesty.

Clifford Garstang is author of the novel in stories, What the Zhang Boys Know, winner of the Library of Virginia Literary Award for Fiction, and a story collection, In an Uncharted Country. He is also the editor of Everywhere Stories: Short Fiction from a Small Planet, Volumes I and II, anthologies of stories set around the world. In his former capacity as senior counsel for East Asia at the World Bank, he was responsible for numerous poverty alleviation projects in China.