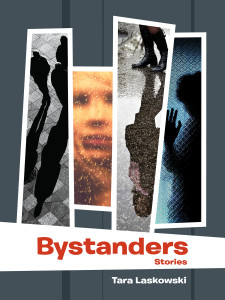 Tara Laskowski’s collection of stories, Bystanders, is an examination of the ways in which people are undone. Thirteen tales — some of them strange, some of them deceptively normal — all explore the idea that bystanders aren’t spared from change, but are affected by the things happening around them.

The collection’s opening story, “Witness,” speaks directly to this notion. It begins violently: “The boy’s body hit the hood of the Toyota, slammed off the windshield, and then slid out of sight from where Marie stood.” The narrator, Marie, who witnesses this tragic death, becomes fixated on the man who hit the boy. Ultimately, her obsession cracks loose an awareness in her own life, forcing her to acknowledge the dissatisfaction she feels in her relationships.

In “Entrapment,” an investigative journalist reports on a story about a pedophilic judge. Laskowski writes: “For my little bit of investigative reporting, I’m not much of a detective when it comes to my own life. That’s probably why I didn’t see it coming.” This is an excellent example of the parallels that exist in Bystanders. In this instance, the correlation is direct: The journalist reports on a crime while blind to his participation in an accusation made by his wife.

The author uses tangential occurrences in her stories to highlight various levels of awareness. Because so many of the “big events” in Bystanders (death, murder, theft) don’t occur directly to her characters, it allows for a more nuanced exploration of how they fail or succeed in their own lives: marriages, babies, relationships, and parenthood. It is an effective storytelling strategy, and Laskowski is so diverse in her rendering, each piece feels like a unique and essential examination.

In “Support,” a woman receives a note from her husband, a man who was reported dead eight years prior. As the narrator reflects on the mystery of the letter, she becomes more aware of the gap in the relationship between her and her daughter.

By the end of this Hitchcockian tale, she concludes her pain won’t be satisfied by reuniting with the man who left, but by connecting with the people still in her life. “She thought about what Evelyn had said about going back, doing it all over. See what else might’ve happened. She thought of an article she’d read once — some science fiction piece or philosophy — something about all the different worlds out there that disappear every time you make a decision, all the doors that close that you can never go back to.”

Bystanders focuses largely on everyday issues, but there are tinges of the unreal, as well, like when a ghost appears on a baby monitor and alarms a watchful mother. These strange occurrences speak to the same themes, forcing characters to acknowledge a reality or truth they had previously been ignoring. No matter how surreal or commonplace, the insertions Laskowski makes in her plots teach us that witnesses won’t be spared: life forces them to participate.

Reading Bystanders makes you want to sit down with Laskowski and ask her to unravel the complications in your own life; to have her sort out your questions with the same razor-sharp sensibility with which she guides her characters. This highly readable collection is an offering from a talented writer, one we will all benefit from seeing more of.

Kim Winternheimer is founding editor of the Masters Review. Her work has appeared in Tin House online, the Rumpus, VICE, Little Fiction, Necessary Fiction, the Oregonian, and other publications.