Sometimes I Think About It: Essays

This brave new collection stuns with its candor and deep dive into the heart of suffering. 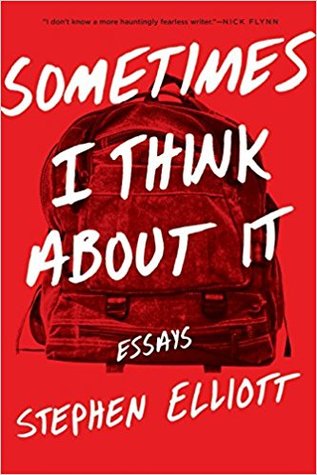 In his new collection, Sometimes I Think About It, Stephen Elliott takes on topics that are scintillating from the outside — a polyamorous dominant lover, the boardwalks of Venice Beach, a big-budget Hollywood film — and rips away the veneers, exposing the unpleasantness beneath.

Like that damned glitter you can’t get off the next day no matter how hard you try, Elliott turns life over to show its mournful underbelly. In the neon light, the sparkly essence you slapped on as an accessory shimmered like jewels, but the next day, it just feels pathetic. This book is the morning after, trudging home on a bleak day with smudged mascara and ripped stockings.

In fact, Elliott himself is frequently the one in the ripped stockings, both figuratively and literally. In the essay “Sometimes I Think About Suicide,” a young woman approaches him at a party and tells him, “you look like a sissy slut.”

After he cleans the woman’s boots with his tongue, and she rips his stockings, Elliott reflects on what happened:

“I stood in my torn stockings. I smiled at people occasionally, my slip stuck to my back by some sticky liquid I’d picked up rolling around the bar floor. This is my problem, I thought. I belong here.”

That essay, in which he describes his penchant for both suicidal thoughts and the explicitly violent videos buried in the bowels of the internet, is one of the most compelling of the book. Elliott’s writing is best when it peers inward. His unadorned, cutting prose sets the right tone for his personal essays, which are self-deprecating and unflinchingly honest.

In “Where I Slept,” the first essay in the book, Elliott describes the year he spent homeless after he left home because of his strained relationship with his father. The residual pain of that fractured relationship lurks beneath the rest of the book, like in the essay about the visit from his little brother that forces him to reckon with his familial wounds, and the complicated story of his affair with a married woman who fetishizes hurting others as much as Elliott fetishizes being hurt.

The momentum of the book slows, though, when Elliott becomes journalist rather than memoirist. In “Jimmy Wallet is Buried Alive,” the reader visits La Conchita, California, a town that was buried by a landslide that killed 10 people. The pace was slow and haunting, just like the earlier essays, but without the intensity of firsthand emotion, I lost the desire to linger. The same is true of the following essays, one about the Israeli-Palestinian conflict and the other about a 15-year-old boy who was punished harshly by California’s justice system.

A surprise hidden toward the end of the book is the essay “Why Britney Matters,” a personal exploration of Elliott’s love of Britney Spears:

“Her unquestioning trust in her producers is a hallmark of her sound. Cluelessness pervades her music — a deliberate ignorance of larger societal issues, lyrics shocking in their meanness, all of it layered over a pitch-perfect delivery and simple, unforgettable beats. How many people could remove themselves so entirely from the process until called upon, at which point they slip into their role like a spoon into soup?”

Elliott, of course, could not. His essay collection is as utterly unique as his voice is distinct. Although there were several essays that fell flat, the collection is saved by Elliot’s willingness to bare himself — and his wounds — to the world.

Avery J.C. Kleinman is a writer and audio producer living and working in Washington, DC. Follow her on Twitter at @AveryJCK.

This absorbing work looks at one man’s betrayal of his innate sense of justice in pursuit of wealth.