When They Call You a Terrorist: A Black Lives Matter Memoir

The woman who launched a movement shares her story. 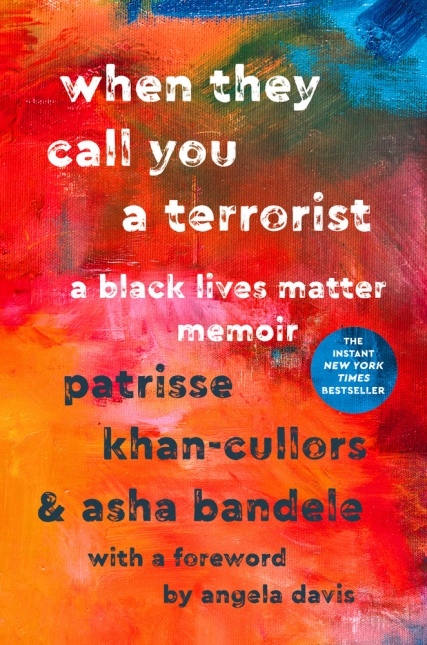 “Like many of the people who embody our movement, I have lived my life between the twin terrors of poverty and the police,” writes Patrisse Khan-Cullors. In When They Call You a Terrorist, which she co-authored with asha bandele, the history so many of us willfully push away is inscribed on the page:

“We are the post-Reagan, post-social safety net generation. The welfare reform generation. The swim or motherfucking sink generation. And, unlike our counterpoints on Wall Street, where crack is used and sold more, we don’t have an employee assistance plan.”

The first section of this powerful, visceral book tells of Khan-Cullors’ youth, stories about her fathers, her mother, and, especially, her brother, who was jailed from a young age because of being black and because of his struggle with mental illness.

And while all the personal anecdotes tie Khan-Cullors to the Black Lives Matter organization she, along with two other radical black activists, Alicia Garza and Opal Tometi, founded, a story I’d like to highlight is that of Gabriel Brignac, one of Khan-Cullors’ fathers.

After Brignac was released from prison, where he’d been held because of drug addiction, he died of a heart attack. “What is the impact of not being valued?” Khan-Cullors asks.

“My father was part of a generation of Black men who spent a lifetime watching hope and dreams shoved just out of their reach until it seemed normal, the way it just was. I lost my father at a time when 2.2 million people had gone missing on our watch, buried in prisons that were buried in small towns, but somehow and unbelievably this man kept coming back…This man. My father. Gabriel Brignac, who loved me deeply and fiercely. Who spent every moment with me telling me how my Black life mattered.”

When They Call You a Terrorist is divided into two sections and moves back and forth in time, shifting its focus from the Black Lives Matter movement to Khan-Cullors’ brother, Monty:

"My brother was in an episode and although he never touched the woman or did anything more than yell [after a car accident], although his mental illness was as clear as the fact that he was Black, he was shot with rubber bullets and tased. And then he was charged with terrorism. Literally.”

She speaks of the cognitive dissonance surrounding society: of her brother’s experiences as a mentally ill black man in jail; of a young black man incarcerated for 10 years for a non-violent robbery while Trayvon Martin’s killer, a menacing white man with a past, is acquitted; of white college student Brock Turner being given a six-month sentence for felony sexual assault because, said the judge, “Turner couldn’t make it in prison.”

It’s from this place of crushing emotional pain — and righteous outrage — that Khan-Cullors first types the hashtag #BlackLivesMatter.

There is a long history of black women organizing social-justice protests and reshaping the world, women like Rosa Parks — who did much more than simply sit down — and Angela Davis, who wrote the foreword to When They Call You a Terrorist.

It’s a pleasure and an honor to read and to witness — with the full understanding that witnessing isn’t passive and entails action — bandele and Khan-Cullors’ lyrical yet harrowing words.

Because of that, I don’t believe it’s in the spirit of this book, or the movement, to end with my own voice. Instead, listen to Khan-Cullors and bandele. To their voices. To this movement. To the indisputable, forever truth that #BlackLivesMatter.

“We deserve to be our own gardeners and deserve to have gardeners. Mentors and teachers who bring the sunlight, the rain, the whispered voices above the seedling that say, Grow, baby, grow.

Jenny Ferguson is Métis, an activist, a feminist, an auntie, and an accomplice with a Ph.D. She believes writing and teaching are political acts. Border Markers, her collection of linked flash fiction narratives, is available from NeWest Press. She lives in Haudenosaunee Territory, where she teaches at Hobart and William Smith colleges.