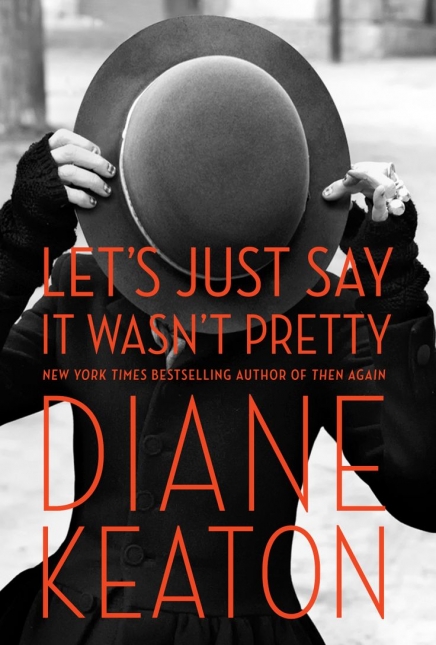 To be beautiful or not — isn’t exactly the question that kneads Diane Keaton’s memoir together. Let’s Just Say It Wasn’t Pretty partially re-examines her soft-but-evolving wrangle with her looks.

Although she was the skilled actress who seduced Warren Beatty, awed Jack Nicholson, wowed Woody Allen, and mesmerized Al Pacino, there was little confidence in the very private, hush-hush spaces of her mind: “In my early twenties I used to torture Woody with my insecurities: Would I ever be cast in a great movie? Would my slightly-but-definitely-noticeable crooked nose keep me from getting work? Looking back, I don’t know how Woody put up with me.”

Now 68, Keaton equates the issue of her allure with a dose of sobered self-doubt: “These old-as-dirt days have one advantage: I’ve learned to see beauty where I never saw it before. But only because my expectations are more realistic…When I was in my twenties and thirties I wanted my appearance to be more interesting than the beauty that surrounded me. It was a fool’s folly.”

There can be a charismatic mystique of “non-beauty,” but it has the polarizing power of ruffling up reverence or repulsion or both. Keaton writes, for example, that fashion’s beloved Diana Vreeland “was born with more…ugliness than most women in the world of fashion and beauty could bear. The black-as-Grecian Formula hair slicked back behind her ears and the cigarette dangling from her cherry-red lips were mere background material for the schnozzola sitting center stage in the wreckage of a face that defied compliance. ”

Vreeland vaulted from sophisticated French society, to resilient reigns as editor-in-chief of Harper’s Bazaar and Vogue. Afterwards, she was the inaugural curator of twelve exhibitions at the Costume Institute of the Metropolitan Museum of Art. “Early on,” Keaton continues, “she must have figured it was better to embrace the bad news and go with it…She paraded her flamboyant style while turning beauty toward the light of publication.” And without a cosmetic procedure. Unlike gaggles of other celebrities, Keaton hasn’t yielded to face, eye, and breast lifts, either, or tummy tucks, nose jobs, liposuction, dermal peels, Botox, or acid treatments. She is, by contrast, a hybrid of “cover-up and bare”: some of her insecurities are tucked away in all-weather turtlenecks, sweaters, and wide-brimmed hats, while others — the less chafing peccadilloes — have been resolutely rerouted to interests beyond her face.

Keaton has a superb knowledge about architecture; she has read, researched, and ruminated on a myriad of the masters, from Frank Lloyd Wright and Robert Adams, to Lewis Baltz. She has renovated 15 homes and occupied close to 50. In 2012, Keaton published House — a luscious coffee-table book — which reveals the ways in which people design, live, work in, and utilize their spaces.

Equally knowledgeable about photography, she has also investigated the oeuvres of many (Diane Arbus, Garry Winogrand, and Todd Hido) and stockpiled thousands of images for a public digital-archive-to-be, of her making.

Alongside the continuum of her activities, Keaton writes that she often considers canvassing friends about how they “metabolize” maturing. But, she hasn’t — yet: “Major corporate boards require us to resign at sixty-five. Yet 42 percent of us are delaying retirement…25 percent of us claim we’ll never retire, and all of us refuse to acknowledge our coming demise. You can be sure…Steven Spielberg, Sly Stallone, and Rob Reiner at sixty-six; Goldie Hawn, Bette Midler, Steve Martin, and Cher at sixty-seven; sixty-eight-year-old Michael Douglas; Joni Mitchell, Sam Shepard and Robert De Niro at sixty-nine; David Geffen and Harrison Ford at seventy; Paul McCartney at seventy-one; Al Pacino at seventy-three; seventy-six-year-old Warren Beatty, Jack Nicholson, and Robert Redford; and finally, seventy-seven-year-old Woody Allen are not retiring. Who cares if the U.S. government has proclaimed us old?”

Let’s Just Say It Wasn’t Pretty might be slight, but it has considerable might. Keaton has put in sufficient autobiographical shadow — her light, dark, and grey moods — throughout. The big question — the progression to scary aging — is not really covered. Thoughts from her famous and infamous cadre about how they monitor their mortalities would have been helpful — and therapeutic — to a myriad of readers.

It is true: Every decade has its beauty, but the opposite of the graduated slope up to loveliness is the descending bridge to “bodily decline.” Until —