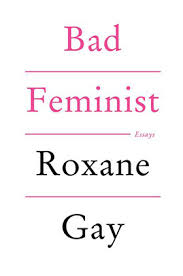 In Roxane Gay’s new collection of essays, Bad Feminist, she tackles not only what it is to be a feminist (and a bad one, at that), but also what it means to be a human being.

In the introduction, Gay embraces the label of “bad feminist” because she is flawed and human. She likes music that degrades women and watches movies that “tell stories of men as if men’s stories are the only stories that matter.” The sentiment that we are all flawed is what carries the collection. The essays are serious, entertaining, thought-provoking, and brave. Gay does not shy away from the truth, nor does she sugarcoat it.

The collection starts out a bit slow, with essays on privilege, Scrabble tournaments, and Sweet Valley High, but only grows stronger as it progresses. Some of her writing hits so hard that readers will need to put the book down and contemplate what they have read before continuing. For example, in “Beyond the Struggle Narrative,” she writes about how “the critical acclaim for black films is often built upon the black suffering or subjugation.”

Readers may not agree with everything Gay has to say, but there is no doubt something in this collection will make them view race or feminism — or even The Hunger Games — a little bit differently.

The collection is made up of years of Gay’s scholarly research, yet all the essays are relevant to what’s happening in society and pop culture today. Her essay “Girls, Girls, Girls,” for example, explores how TV shows such as “Girls” and movies such as “Bridesmaids” have so much responsibility put on them to be groundbreaking in terms of their representations of women. And she writes it is sad that strong women who create and star in TV shows and movies are seen as revolutionary. It should be the norm, not the exception.

“What We Hunger For” stands out as one of the strongest, most honest pieces of the set. In this essay, Gay writes about The Hunger Games, sexual violence, and trauma. She admires the book’s protagonist, Katniss, for doing her best to be strong for others, even if the character does not believe she actually is strong: “I love that a young woman character is fierce and strong but human in ways I find believable.”

In “Tragedy. Call. Compassion. Response,” Gay discusses how social media and compassion shaped our reaction to the massacre in Norway and the death of Amy Winehouse. She writes: “I have never considered compassion a finite resource. I would not want to live in a world where such is the case.”

After Gay released her debut novel, An Untamed State, a few months ago, TIME magazine said this will be the year of Roxane Gay. After finishing her brilliant collection of essays, readers will easily see that TIME might be right.

There are so many essays in this collection to write about, but the final one sums it all up. “Bad Feminist: Take One” returns to how feminism has been shaped, changed, and distorted. In this essay, she takes themes she’s brought up in the others — feminism and race, feminism and motherhood, and feminism and the workplace — and weaves them into one final, overarching piece.

In the end, Gay acknowledges that no matter what issues she has with feminism, she “will not deny the importance and absolute necessity of feminism,” and would rather be a “bad feminist than no feminist at all.” Whether or not readers join Gay in her bad feminism, they will certainly walk away from this book with a new outlook on their own flaws and their own humanity.

[Roxane Gay will appear at this year’s Fall for the Book festival, which takes place Sept. 11-18 at locations around the DC metro area.]

Katie Dvorak is the Independent’s social media director. You can follow her on Twitter at @KMDvorak87 and @WIRoBooks.

By Grant Rumley and Amir Tibon