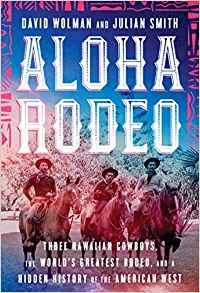 If the true nature of America — and of Americans — is up for grabs in these politically polarized times, then a tale of champion Hawaiian cowboys at the turn of the last century offers a fresh take on the complex question of national identity.

Aloha Rodeo: Three Hawaiian Cowboys, the World’s Greatest Rodeo, and a Hidden History of the American West, by journalists David Wolman and Julian Smith, recounts the surprise success in 1908 of a trio of Hawaiian cowpokes at the premier mainland showcase of riding and roping skills. Busting preconceptions along with steer, these paniolo (Hawaiian for cowboy) proved that Polynesian ancestry and unfamiliar gear like leather lariats were no barrier to success at the annual Frontier Days rodeo in Cheyenne, Wyoming.

This breakthrough occurred a decade after the United States annexed Hawaii, making the islands’ inhabitants Americans. But that act of imperialism didn’t sit well with many natives (and still doesn’t) and was apparently unfamiliar to most mainlanders, who viewed the exotic contestants not just as outsiders but foreigners.

While sketching the backgrounds of the people who eventually collide in the cinematic climax of this fish-out-of-water, underdog narrative, the authors touch on several important themes. A central one is authenticity: What makes a real American cowboy? Or, what makes a cowboy a real American?

Managing large herds of cattle began with the Spanish settlers of the Americas, who introduced to the Western Hemisphere both the cows and the horses used for herding them. It was only in the mid- to late-19th century — after millions of native bison had been wiped out, damaging the Native-American cultures dependent on them — that the prairie was freed up for cattle grazing by U.S. settlers. Tending those herds was a heterogenous group of hands: The book notes that one in four cowboys was African American.

But by 1908 — less than a generation after the official closing of the frontier — the white Anglo cowboy had become firmly fixed in the national consciousness as the quintessential American. Helping create and perpetuate this deceptive image was a burgeoning popular culture: dime novels, stage melodramas, early movies, and, most especially, Buffalo Bill’s Wild West.

This sprawling, blockbuster traveling show — featuring set-piece battles between cowboys and Indians, wagon trains under siege, stagecoach holdups, trick shooting, and more — played from San Francisco to the royal courts of Europe and, at one time, made impresario Buffalo Bill Cody the most famous man on earth.

Needless to say, Hawaiian cowboys didn’t fit the image. And yet, cowboying developed in the islands before it did in the Anglo-settled West. A British naval commander had, in the 1790s, presented a few longhorn cattle as a goodwill gift to the native monarchy of what was then an independent nation known as the Sandwich Islands. Royal protection of the animals intended to swell their ranks was too successful: It wasn’t long before feral herds of the huge, ferocious beasts were terrorizing the countryside.

The Hawaiians invited over Spanish cowboys — vaqueros — and their horses from California to show the locals how to control the pests. As the longhorns retreated to the thick forests of volcanic mountainsides, killing wild cattle soon gave way to herding them, as other export products dried up and the islands turned to beef production as a new moneymaker.

For the Hawaiians, roping steer on the flat arena fields of Frontier Days must have felt like cheating. Their normal work environment involved riding through prickly brush thousands of feet up a mountain and avoiding hidden lava pits while trying to round up aggressive bullocks with sharp horns who would just as likely charge as flee.

And the perils didn’t end with capture: Cattle had to be led down the mountain with just the right rope tension to avoid escape or entangling horse and rider, and then led, balking, into the famous Hawaiian surf to swim to the boats that would take them to market.

The authors unfurl their story with the easy precision of an expert roper. Characters are clearly but simply etched (humble cowboy, loud promoter), as might be expected in a book largely drawn from breathless contemporary press accounts and family legend. Modern-day animal-rights proponents appalled by rodeos’ violent use of creatures for sport may be surprised to find concerns over animal cruelty being raised over a century ago (though not loudly enough to stop the proceedings).

Aloha Rodeo can be read as a hopeful counterpoint to the play and movie “Great White Hope,” the fictionalized account of the first African-American heavyweight boxing champion, Jack Johnson, who won his belt just a few months after a saddle trophy was first awarded to a paniolo in Cheyenne.

The Johnson character is eventually knocked out not by an opponent in the ring, but by a power structure that views a black fighting champ as too threatening to the established order. In contrast, our rodeo champions from the islands were mostly celebrated on the continent and returned home as heroes.