A rock-journalism kingmaker sums it all up. 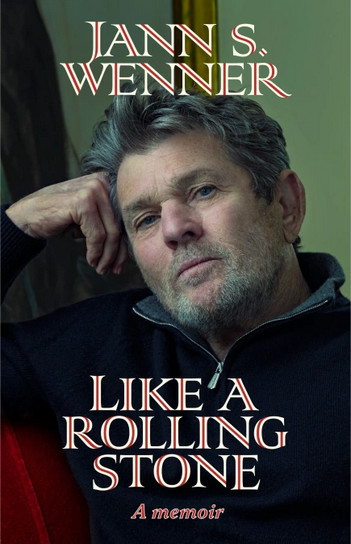 Jann Wenner may be the greatest living editor in American journalism. He is certainly the coolest. Back in November 1967, he published the first issue of Rolling Stone, a magazine whose very name seeded its mythology. Muddy Waters had released a single titled “Rollin’ Stone” in 1950. The song was not Muddy’s first hit, as Wenner reports in Like a Rolling Stone, his new memoir. (That was “I Can’t Be Satisfied,” two years earlier.) Nonetheless, a British blues-rock band named itself the Rolling Stones in 1962. Bob Dylan released “Like a Rolling Stone” in 1965.

And now we have Wenner’s memoir. While not a genre classic, like Keith Richards’ Life or Springsteen’s Born to Run, the Jann Wenner story will resonate with those who grew up with Rolling Stone in its heyday, from older boomers to aging Nirvana fans, the sort who know their way around a head shop and prefer the Joni Mitchell version of “Both Sides Now.”

Born on January 7, 1946, in the first days of the Baby Boom, Wenner grew up a nonobservant Jew in a wacky, wealthy family in Marin County, across the bridge from San Francisco. He went to the finest schools. He was always picked last for kickball. He dated girls but lusted for boys. He somehow missed the Beatles on Ed Sullivan, hardly a promising portent for the future dean of rock ‘n’ roll journalism. He went to Berkeley. (His parents had the money for Harvard, but he didn’t get in.) He threw himself into the Free Speech Movement and campus journalism and the burgeoning drug scene, but he remained a child of privilege, living off-campus in a three-bedroom penthouse bankrolled by his folks.

Wenner tripped at Ken Kesey’s acid tests, danced to an embryonic Grateful Dead, and met Ralph J. Gleason, an older, mustachioed critic for the San Francisco Chronicle. He made a pilgrimage to London and met Eric Clapton. He fell for a beautiful, Asian-eyed woman named Jane Schindelheim. He promptly cheated on her with a Welshman.

“I gave her a warning,” Wenner writes. “I am evil, I have the devil in me; it’s not a good idea for you to be around me, but I love you and want to be with you.” She stayed. They wed. Three decades later, he left her for a younger man.

For the title of his magazine, Wenner embraced an image that linked America’s greatest country bluesman to Britain’s soon-to-be greatest rock band (following the Beatles breakup), with a nod to America’s greatest rock songwriter and to the emerging art of rock-music criticism. Gleason, Wenner’s mentor and model, had published an essay titled “Like a Rolling Stone,” wherein he argued that all the aforementioned artists were poets, seers, tellers of truth.

From its founding until the close of the 20th century, Rolling Stone reigned as the pop-music magazine of record, utterly dominating its genre. More than that, Rolling Stone emerged as the voice of its generation — Wenner’s generation, people who came of age in the ‘60s — and synthesized Vietnam and the Beatles and drug culture and the Civil Rights Movement.

Almost singlehanded, Wenner and his writers launched a new school of American journalism with long, rambling articles filled with meticulous reporting and vivid scenes but written from a strident, unapologetically liberal perspective: Wenner’s perspective, which most of his writers shared.

Surely no American publication of the last half-century saw a greater proportion of its creative staff achieve fame and fortune. The magazine effectively launched the careers of Cameron Crowe, Ben Fong-Torres, Patti Smith, Joe Eszterhas, Annie Leibovitz, Jonathan Cott, Lester Bangs, Chet Flippo, Jon Landau, Greil Marcus, Timothy Ferris, Mark Seliger, and Kurt Loder, among others. The New Yorker probably published as many big names in that span, but I suspect most of them arrived at their peaks. Rolling Stone hired many of its stars out of college.

Wenner is an accomplished writer himself. His critical ear, especially later on, is more suspect. Some Rolling Stone writers accused him of confusing stardom with stars, the kind awarded in record reviews. In the book, he defends his five-star review for Goddess in the Doorway, a forgotten Mick Jagger solo album from the early aughts.

Wenner’s greater talent lay in scouting great writers and finding them perfect stories. He says he came up with the ideas for Tom Wolfe’s landmark books The Right Stuff and The Bonfire of the Vanities. His most consequential catch was Hunter S. Thompson, who buzzed into Wenner’s airspace after reading Rolling Stone’s unflinching coverage of Altamont in the final month of the 1960s, a package that Wenner recalled as the magazine’s defining moment. To cover Altamont honestly required Wenner’s magazine to hold a coke-dusted mirror up to the morally challenged musical act that had inspired its name.

Thompson alone wrote enough landmark articles to guarantee a legacy for Rolling Stone. His two greatest gonzo works, Fear and Loathing in Las Vegas and Fear and Loathing on the Campaign Trail ’72, began as dispatches to Wenner.

Wenner spends the second half of his memoir jet-setting around the globe with a rotating cast of Rock & Roll Hall of Famers, the pop stars whose friendship he had secured by creating Rolling Stone. He became lifelong friends with Springsteen, Bono, Dylan, Mick, and even Paul (once Macca recovered from the infamous John Lennon interviews Rolling Stone published in 1971).

Wenner’s affable account delivers lots of booze, a whole lot of drugs, an endless procession of yachts and private jets, and an exhausting quotient of skiing, but not much dirt. By my count, the author trashes only two or three people. He calls Paul Simon “a cold man to the very end.” David Geffen takes him to task for not being wealthier.

This is not the Jann Wenner of Sticky Fingers, the 2017 biography by Joe Hagan that, according to the New York Times, portrays Wenner “as a narcissist, a bully, a seducer and a betrayer, and a troubled soul.” Not surprisingly, Wenner withdrew his support for that project.

The Jann Wenner of Like a Rolling Stone leads a charmed life darkened by two narrative clouds. One is declining health, a topic he skirts for 500 pages. His first mention of any real malady comes on page 512, where he refers to “the spinal fusion I had in 1990,” as if the reader had learned of it elsewhere. Fifteen pages later, he somehow breaks his leg and suffers a massive heart attack on the same Sunday morning. His skiing days are over.

The other is the 2014 publication in Rolling Stone of “A Rape on Campus,” a story alleging gang rape at the University of Virginia. Further reporting revealed the purported victim as a fabulist. The ensuing scandal brought the magazine to its knees, with the Washington Post raising the ax: The newspaper crusaded against Rolling Stone for months, publishing scores of articles about the non-rape where two or three might have sufficed.

My favorite paragraph in Like a Rolling Stone is the last one, where our narrator reminds himself how many things in his remarkable life have gone right: “I am an old man and yet feel so young in my heart. Kids, all six of them, all good. Spouses, all two, all good. Weather fine, the ocean rolls in, and the sun makes the ocean sparkle. The dog sleeps at my feet.”