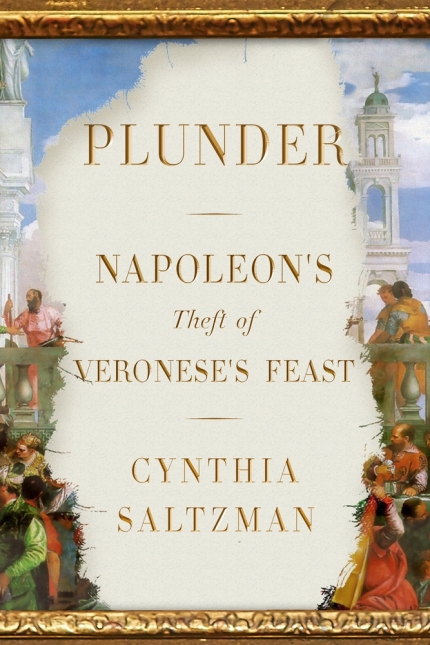 In Plunder: Napoleon’s Theft of Veronese’s Feast, Cynthia Saltzman sets out to tell European history through the life of a single painting. She succeeds admirably, deftly leading the reader from the Italian masterpiece’s creation in 1562 through Napoleon’s seizure of it in 1797, and, more briefly, its preservation during World War II and status in the Louvre today.

The artwork under scrutiny is Paolo Veronese’s Wedding Feast at Cana, commissioned for Venice’s San Giorgio Maggiore, a Benedictine abbey near the Doge’s Palace. The painting, measuring a whopping 22.2 by 32.6 feet, illustrates Jesus’ miracle of changing water into wine. Like Leonardo da Vinci’s Last Supper, Feast filled an end wall of a refectory where monks ate meals in silence.

The painting’s densely packed scene depicts a flamboyant banquet with 130 figures. The celebration takes place not in Cana, but in an idealized version of Venice. Thus, the artist glorifies the wealth of Venice, endows it with God’s blessing, and brings immediacy to the possibility of miracles.

For all the painting’s splendor, we learn through Saltzman’s calculations, the abbey would have had to pay more to stretch “a piece of Venetian silk of the same size” across the wall — a brilliant insight into the monetary value of a 16th-century artist’s genius.

Wedding Feast at Cana met immediate acclaim. Painted on canvas rather than directly on a wall, the huge piece was movable, attracting eager buyers, among them France’s Louis XIV. So many artists wished to study the work that the abbey required introductions from wealthy patrons. As one might expect, it was not accessible to the public.

That, indeed, is the crux of the matter.

Veronese’s famed work was more than 200 years old when the French Revolution began. Initially, French mobs destroyed the art they ripped from their palaces and churches. In 1793, to preserve the remaining riches and share them with the common people, the revolutionary leaders created a public museum — the Louvre.

As with many of the French Revolution’s ideals, before long, practice corrupted principle. By 1794, the government was confiscating art from the neighboring countries it invaded to provide glory “to the land of liberty and equality, the French Republic.”

Just two years later, 26-year-old Napoleon Bonaparte led an ill-equipped French army across the Alps to push the Austrians out of Italy. France’s coffers were empty. The expedition was to finance its operations “with its bayonets,” as well as send riches home to Paris. General Bonaparte exceeded expectations.

As Saltzman writes, “If the French government launched the policy of seizing art from its defeated enemies, Napoleon made it his own.” When his army routed the Austrians, he forced Italian territories from Milan and Venice to the papal states to contribute to the glory of their French “liberators.” He demanded meat, wine, horses, and gold, but also mountains of hand-picked paintings, sculptures, decorative arts, and ancient manuscripts.

By the time he’d finished, the glories of Italy were in France. Paris was the new Rome.

In 232 pages (sans notes), Plunder races the reader through years, battles, people, places, and paintings. One theft piles upon another until, as the reader dreads, Veronese’s massive Feast is ripped from its wooden stretchers, wound around a cylinder, and shipped to Paris.

The image of Napoleon as a ruthless victor largely prevails, though Saltzman sprinkles in positive tidbits here and there. She recognizes that he also tore down the ghetto walls restricting Jewish life in Italy, and that he “draft[ed] the laws and buil[t] the institutions (educational, financial, religious) — on which to ground the French state.” In the book’s context, that brevity feels appropriate, since Plunder’s focus is the art Napoleon negotiated, coerced, and stole from his European rivals.

Like Veronese’s Feast itself, Saltzman’s story is peopled with dozens of colorful characters. Vivant Denon, an art expert who advised Napoleon, stands out because a wing of the present-day Louvre bears his name. Denon was voracious as he scooped up Italian masterpieces on Napoleon’s behalf. In later years, he was equally ferocious as he protected what he’d “harvested” for France’s glory. Hypocrisy, too, is on display, as the British decry Napoleon’s thefts even as they legitimize their possession of Greece’s Elgin Marbles.

Saltzman’s strength lies in her keen interpretation of the complex era. With admirable precision, she compresses history into the narrow, illustrative thread she has chosen to unravel. Her descriptions of artworks, historical characters, and events shine.

For me, she fails only where she chooses not to tread. Is there a deeper story about how Europe’s monarchs and popes amassed such wealth in the first place? Don’t most of our museums hold questionable collections? The questions are begged but never uttered.

In an ironic twist, in the Louvre today, Wedding Feast at Cana shares a salon with the Mona Lisa. There, photo-snapping crowds turn their backs on the huge canvas’ beauty as all eyes seek the celebrity in the room. With Plunder, Cynthia Saltzman has created her own masterpiece. She reminds us to turn around and look.

Margaret Rodenberg is the author of Finding Napoleon: A Novel and a director of the Napoleonic Historical Society.