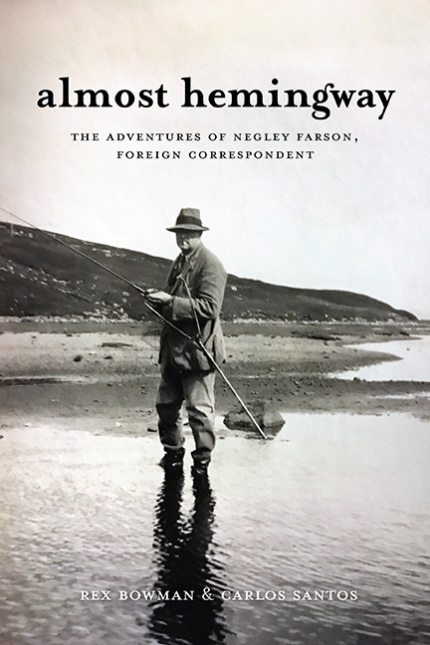 Take two young storytellers of the early 1900s from similar upbringings, with parallel interests and bad habits and a few shared demons. Put each on his own path to adventure over self-inflicted bumps in the road and the endemic strife of the era. Then set them down before their typewriters and see what comes out.

Wait a few generations, then ponder: Why did one become a heralded literary icon, and the other — whose pages were filled with true accounts and whose good stories weren’t spoiled by facts — a forgotten historical footnote? And where was the bend in the road that decreed one man’s words would be required reading forever after, while the other’s, though similarly lauded at the time, would all but vanish?

When Ernest Hemingway is half of this theoretical equation, it’s hard to believe there could be a second half, someone considered both his contemporary and his equal. Yet there is: Negley Farson.

Never heard of him? You’re not alone. But in Almost Hemingway: The Adventures of Negley Farson, Foreign Correspondent, authors Rex Bowman and Carlos Santos reveal the tale of this real-life daredevil, deadline-writer extraordinaire, and, in the words of one reviewer, “mutinous existential renegade.”

Bowman and Santos jump into Farson’s life story as our young wanderer and his under-appreciated wife (the first of many Hemingway parallels) embark on a journey from Rotterdam to the Black Sea in a small wooden sailboat. Why would anyone attempt such a trek? In Farson’s case, it was a ploy to hook a major metropolitan newspaper to underwrite a succession of foreign posts about an unlikely excursion — something the journals of the day were eager to serialize for their voracious audiences.

Lucky for Farson, the Chicago Daily News bit, bankrolling his exclusive reports from the rivers and canals of Europe. That Farson ended up pulling his boat like a scow along a canal for a long unfortunate stretch, then shooting a series of rapids without a guide or reliable map in Romania, only made the story more entertaining and his value to his editor more worthy, subscription-uptick-wise.

Thus began a pattern that described Farson’s professional life. First, get a job that may or may not require sitting in an office or making sales calls. In due time, when boredom and/or wanderlust hit, buy a boat or a car or catch a ride on a plane (always a long series of plane rides, with many stops along the way) to where history was happening, where wars were about to erupt, and where few Americans had ever set foot, and try to turn the resulting reports into a paying gig or a book proposal with a big enough advance to fund the next escapade.

Farson was a champion of being in the right place at the right time and of getting his stories posted from the front lines before other correspondents finished their copy. How did he do it? Farson feigned Canadian citizenship and joined Britain’s Royal Flying Corps when the life expectancy of a young RFC recruit was two weeks. Two weeks! He also wheedled his way to Russia as an arms seller — a job which, though it turned out not to offer any personal financial solvency, did help him provide fellow American writer John Reed with significant fodder for Reed’s opus, Ten Days That Shook the World.

But in his role as eyewitness to the changing of the guard across multiple continents, Farson far surpassed Hemingway and every other American expat of his era. While Papa was living his adopted bohemian life and searching for that one truest sentence from a hotel room with a view of the Paris skyline, Negley, between recoveries from inevitable injuries and illnesses, crossed the Caucasus on horseback, predicted and reported on Gandhi’s arrest in 1930, met Hitler, and zigzagged through South America by car and Africa by any means possible.

Clearly, Almost Hemingway was a labor of love for its authors. That Bowman and Santos have softened some edges of Farson’s chronicles of his adventures, particularly about things that don’t sit well in the 21st century — they recount the tale of his bagging an elephant on a safari, for example, but let us know he didn’t feel good about it — was perhaps inevitable. Men being men was an acceptable thing back in the day.

Yet one delightful fact remains unaltered: Though the men never met, Hemingway owned not one, but two copies of a book that told “a story of some rods, and the places they take you to.” Going Fishing, Farson’s ode to his favorite pastime, may be his work that has best stood the test of time. And while others of his books enjoyed splashier moments on the bestseller list before disappearing, this one might still be sitting on an old family bookshelf. In its foreword, Farson writes:

“I love rods, I suppose, with the same passion that a carpenter, a violinist, or a Monaco pigeon shot love their implements. I love using them. But, if I can’t, I can get a lot of fun by just taking them out of their cases and looking at them. A pair of trout rods helped to keep me alive when I was facing a riddle of poverty out in British Columbia where they provided free food; and I’ve used them for politics — to make a wild Irishman talk, when he wouldn’t have otherwise. Although I once thought I was going to come to no good through fishing, I’ve even made money out of it — my little ‘Duplex’ rod has provided me with many articles. But chiefly I love rods because of their associations, the places they have brought me to. They have been part of my kit, when I travel, for many years. This magic wand has revealed to me some of the loveliest places on earth. That is the story of this book.”

That passage alone makes me wish Negley Farson’s writing was easier to track down and read firsthand these days.

Kristin H. Macomber is a writer in Cambridge, MA, and a member of the Boston Athenaeum, which, it turns out, still has a few of Negley Farson’s forgotten travelogues and memoirs on its dusty shelves.