Winning Independence: The Decisive Years of the Revolutionary War, 1778-1781 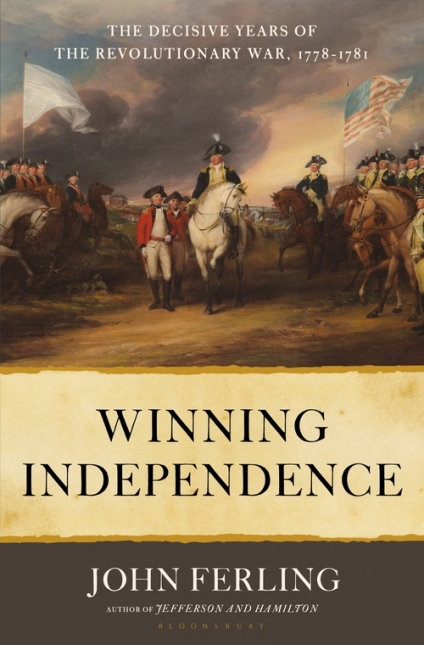 John Ferling, a professor emeritus of history at the State University of West Georgia, is not new to writing about the American Revolution. This is at least his 15th monograph related to that era. So, when a seasoned scholar brings his collective experience and knowledge to bear on extensive research into a four-year period at the center of the War for Independence, what does he find?

He finds that 1778-81 were the decisive years of the Revolution. During those years — the times that tried Americans’ souls — independence was won. Along the way, the author also re-evaluates one of the Revolution’s leading figures, George Washington’s adversary, British General Sir Henry Clinton.

“History isn’t always neat,” advises Ferling, “and the way subsequent generations remember the past isn’t always accurate or balanced.” The American Revolution’s historiography has long tipped toward the war’s earliest years, when the action was primarily in the North. That over-emphasis on New England and the Middle Colonies — engagements at Lexington and Concord, Bunker Hill, and Trenton — has skewed understandings of the war as a whole.

With Winning Independence, Ferling aims to right this imbalance. It was action in the South, he submits, especially in the Carolinas and Virginia — at Cowpens and Guilford Courthouse, for instance — that “laid the cornerstone for the decisive clash at Yorktown in the autumn of 1781.”

In the standard telling, the Battle of Saratoga (1778) — wherein American General Horatio Gates became a hero, defeating Britain’s General John Burgoyne — was the war’s “turning point.” Not so, argues Ferling. Saratoga was just another British misstep in “a war that Britain might have won many times” by 1778 but hadn’t. He explains:

“Fateful choices led to three disasters — along the road from Concord to Boston, on the slope of Bunker Hill, and at Saratoga — and missed opportunities to inflict crushing defeats that could have been fatal to the American insurgency.”

After Saratoga, an uncertain stalemate prevailed. “For both Great Britain and America it was a war with more twists and turns, ups and downs, than a roller-coaster rider might experience.” Not until 1781 — “the pivotal year in this war and one of the most consequential years in all of United States history” — would the Revolution’s outcome be decided.

For all that is new here, this is a rather traditional history. Ferling’s focus is on generals and their choices. While we have glimpses of the common soldiers who carried out their orders and the civilian populations who felt the war’s rage, usually these are to illuminate leaders’ choices — to show the ebbs and flows of a long-drawn-out conflict in which “the real prize had always been to hack away at the enemy’s spirit.” Still, even here there are innovative findings when Ferling employs a comparative approach, as he has done in earlier books.

He finds, for example, that Generals Washington and Clinton “were different in numerous ways, including their dissimilar backgrounds.” But there were some striking similarities. Both were extraordinarily cautious in their approach to warfare. And who could blame them? As Ferling reminds us: “In the pulse-pounding frenzy of battle, chaotic confusion is often the rule of thumb.” Outcomes were precarious and often hinged on the unknown, even the unknowable.

But whereas celebrated hero “Washington could sidestep a fight and win praise for having done so,” historians have been much harsher on his British counterpart. “The time is long overdue to take another look at Clinton,” writes Ferling, “one not tainted by a dubious psychological evaluation of a subject who cannot be interviewed and who left for posterity the scantest of personal letters that might have opened a window onto his inner self.”

Ferling expounds how “when the historical profession was swept with fervor by what was known as psychohistory, Clinton was put on the couch by his biographer, William B. Willcox, in collaboration with Frederick Wyatt, a psychologist.” Willcox and Wyatt found that Clinton craved power, but feeling “he ought not to have it,” “doubted himself” so much that his “disorder” resulted in a “paralysis of will.”

Ferling’s historical diagnosis is that Clinton — “naturally pessimistic,” “the sort to fret over every presumed slight,” and self-described as a “shy bitch” but also the hero of the Battle for Charleston, “America’s Saratoga” — clearly knew how and when to act decisively. “The notion that a subliminal paralysis of will destroyed Clinton’s effectiveness is…ludicrous.”

Washington, too, harbored self-doubts and was a cautious commander. “Both Washington and Clinton appear to have had issues with self-worth,” concludes Ferling, “but with regard to their extreme caution and unwillingness to act, it is more likely that both wisely understood that the road to catastrophe was paved with foolhardiness.”

With over 700 pages of tightly written text presented in protracted paragraphs, this is neither a concise account nor one pitched to sunshine enthusiasts of the American Revolution. But — to borrow again from Thomas Paine — “wisdom is not the purchase of a day,” and stalwart readers will be rewarded.

Ferling’s research is meticulous, his prose methodical, and his conclusions measured. (It is a shame the book did not benefit from a closer proofreading, however; unfortunate typos abound.) Several maps help plot the action, and we are treated to 18 plates, mostly color, among which are portraits of American worthies by Charles Willson Peale, one of early America’s most intriguing artists.

A select bibliography lists Ferling’s choice of “101 Key Secondary Books of the War, 1778-1781.” Those interested in the War for Independence will want to add Ferling’s newest book to their own required-reading lists. Winning Independence shows that “the journey from Saratoga to Yorktown was long, tortuous, and bloody, and it might have ended quite differently.”

Mark G. Spencer is a professor of history at Brock University, St. Catharines, Ontario, Canada. His most recent book on an early American topic is John Beale Bordley’s Necessaries: An American Enlightenment Pamphlet in its Historical Contexts (American Philosophical Society, 2020).