All About the Story: News, Power, Politics, and the Washington Post

The longtime editor tells a compelling — if no-frills — tale. 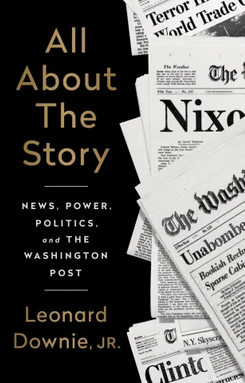 All About the Story is a tale told by the ultimate media insider, Len Downie, who served as executive editor of the Washington Post from 1991 to 2008, and whose relationship with the Post spanned over 40 years in various roles. Downie’s tenure provided him with a front-row seat to some of the most significant events of the 20th century and a unique insight into journalistic morals and ethics.

Unlike many blue-blood reporters who populated the Post, Downie came to his profession from a modest background. His education at Ohio State led him to be nicknamed “Land Grant Len,” after the founding origin of that school. Downie only occasionally lets any bitterness over such a sobriquet show. More often, he wears his background with pride (even in the book’s author photo, Downie is tieless, in a simple plaid button-down shirt more likely purchased at J.C. Penney than Brooks Brothers). Downie worked hard to get where he did.

Such straightforward style also punctuates Downie’s writing. He shares his history in a simple manner, laying out the facts and the reactions of himself and others, never letting himself get too worked up. Often, his vignettes are introduced with a form of “I’m now going to tell you a story.”

This has the benefit of not distracting the reader with unnecessary emotion. However, such journalistic distance is a bit jarring when Downie details his private life. He appears to share as much emotion about his divorces as he does when detailing his lunch. He was married, work made it hard to stay married, so then he wasn’t married anymore. On to the next day’s news.

Downie’s main subject is the power of the media to create change. It cannot be doubted that as forms of media have exploded during the last 50 years, their ability to impact the world has expanded, as well.

This trend emerged most clearly during the Nixon Administration. Downie spends several chapters discussing both the Pentagon Papers and, of course, Watergate. In the former, he outlines the steps taken by the Post, the New York Times, and, later, other papers, to bring to light a document that the government preferred stay hidden, one which outlined several presidencies’ worth of lies and misdirection.

Downie gives ample credit to all of the reporters involved, as well as to Post publisher Katharine Graham, who bravely challenged the prevailing niceties that allowed such lies to remain concealed from the public. While his account doesn’t do much to shine new light on the historical record, he does provide critical insights on the real-time decisions made by those inside the media.

Downie’s affect is the same when discussing the Post’s Watergate coverage. Anyone halfway familiar with history already knows the core facts. Downie’s value is to provide the point of view inside the Post at the time. Such discussion may strike readers as too “inside baseball,” but it’s important to see how a powerful editor who goes to bat for his team can create an atmosphere wherein reporters feel free to explore and probe, knowing their boss has their back. While Downie is not prone to self-congratulation, this is one time when his bravery is duly recognized.

Media omnipresence is not always good, though. Downie recounts his personal struggles with determining when not to report, especially when lives are on the line. One particularly compelling section covers the 1977 hostage situation wherein a DC-based terror group took more than 100 hostages across multiple sites in the District. Downie and other media leaders made minute-by-minute decisions about whether to publish the details they knew, balancing the responsibility to report the news with the wellbeing of the hostages.

Downie used his vast experience in the newsroom to determine how to safely report this unfolding story. He made the necessary call to stand down when appropriate while still defying police brass who asked him to publish disinformation to confuse the hostage-takers. The ability to walk such a fine line between discretion and the outright betrayal of ethics leads the reader to respect Downie even more.

Less clear are the ethics surrounding the media’s approach to politicians’ personal lives. Bill Clinton was not the only presidential candidate to have adulterous skeletons in his closet. Downie explores the cases of Gary Hart, George H.W. Bush, and Bob Dole and shows how he determined in each case whether to publish what the Post knew. Such decision-making requires an experienced, sure hand, and we come to trust Downie as possessing such.

Len Downie’s ability to tell the story — incorporating needed details without coming across as too flowery — is this book’s greatest strength. The reader is won over more by what he is saying than how he is saying it. In a book about journalism, this feels just right.