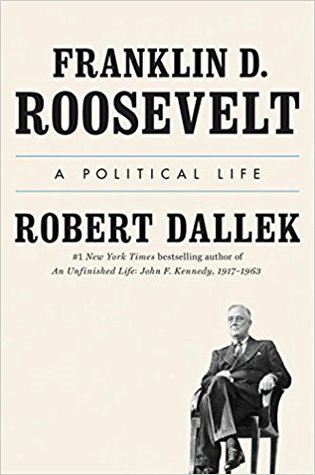 In the preface, noted presidential historian Robert Dallek opens his new cradle-to-grave biography, Franklin D. Roosevelt: A Political Life, by saying it is needed because, in recent years, FDR "has become a remote figure to most Americans."

Is Dallek not aware that Ken Burns' 2014 seven-part, 14-hour documentary on PBS devoted two-thirds of its footage to Franklin and Eleanor Roosevelt and was watched by over 34 million viewers the first time around?

Like all of Burns' longer films, "The Roosevelts" was released simultaneously with the publication of a major coffee-table book (which became a New York Times bestseller), written by former Pulitzer finalist and noted FDR historian Geoffrey Ward. With this level of coverage, if Roosevelt is regarded these days as a "remote figure to most Americans," then so, too, are George Washington and Abraham Lincoln.

Dallek says that his other motive for writing the book is because "in this time of demoralization, [he wants] to remind people, especially a younger generation with limited knowledge of American history, what great presidential leadership looks like."

Lest any reader be unfamiliar with the author's political preferences, of the three endorsements for the book found on its dust jacket, one describes him as a "great liberal historian writing about our greatest liberal president," and another comes from former Democratic National Committee chair Howard Dean, whose credentials as a reasoned critic of historical assessment are nonexistent.

His being identified as a "liberal" historian certainly explains Dallek's unsupported criticisms of Herbert Hoover's alleged "laissez faire approach" to dealing with the Great Depression. The author apparently didn't bother to research Hoover's ongoing proactive efforts to invoke the federal government's power to turn the nation's economy around from October 1929 until his single term ended in March 1933.

If Hoover's many well-considered (though ultimately unsuccessful) tactics over the course of three years seeking to regain some measure of national prosperity reflect his presidency's having been a "failed administration," then Roosevelt's inability to turn the economy around in more than eight years with his trial-and-error New Deal was equally a policy "failure."

In the context of such stumbles in the preface and bias acknowledged on the dust jacket, the first chapter opens with a glaring error: that in the country's 230-year history, "45 Americans have become president." Yes, Donald Trump is America's 45th president, but does Dallek believe Grover Cleveland was two different people when he served his two non-consecutive terms?

Another amazing error occurs when the author claims Eleanor Roosevelt was "the most recognizable first lady in the nation's history since Martha Washington." Has he forgotten that Dolley Madison came after Mrs. Washington? These gaffes make one wonder whether Viking still employs fact-checkers.

A reader looking for something new about Roosevelt in this book will be disappointed. Nowhere is there any indication that Dallek relies on any newly discovered primary sources, meaning this biography is essentially a serviceable rehash of past books devoted to FDR, as is clear from the author's frequent quoting of other biographers’ assessments of our nation's 32nd president.

To the extent this book attracts any readers of America's younger generation whose knowledge of Roosevelt is "limited," and who are willing to wade through this 704-page book in hopes of grasping the particulars of what it is that causes FDR to be recognized as our country's third-greatest president, they will surely come away with mixed feelings and wonder why he merits such acclaim.

Yes, Dallek details how Roosevelt persevered to prevail over the polio virus that made his legs useless for the last 24 years of his life. He also covers well how FDR lifted the country onto his shoulders and with his strong, hopeful voice led it through the Great Depression and World War II. He also gives complete coverage on how Roosevelt, as commander-in-chief, in a state of rapidly declining health, stayed the course through his third term and the few months of his fourth term, and truly became a casualty of war.

Having fully developed FDR's heroics, Dallek also thoroughly covers his weaknesses. Yes, he was an unfaithful husband whose marriage to Eleanor is the story of two separate lives. He was also an absentee father whose children had messy personal lives and failed to distinguish themselves as adults.

He was most definitely not a friend to African Americans, Japanese Americans, or European Jews at critical times when they needed his assistance. He believed that, on occasion, it was just fine to lie to the country to suit his needs. And he demonstrated real dictatorial aspirations during his presidency, evidenced most notably by his failed effort to pack the Supreme Court.

The in-depth accounts of these decidedly unheroic traits and activities, when matched against the man's many accomplishments, should cause anyone with "limited knowledge of American history" to wonder why historians still rate FDR among our top three presidents. Sadly, despite "liberal historian" Robert Dallek's stated desire to elevate the stature of Franklin Roosevelt, our nation's "greatest liberal president," his new book fails to achieve that goal.

Talmage Boston is an historian and lawyer in Dallas whose most recent book is Cross-Examining History: A Lawyer Gets Answers from the Experts About Our Presidents (Bright Sky Press 2016).

Remembrance, life lessons and conversations with friends, all from a book a day.