Then & Now: A Memoir

The onetime Broadway ingenue opens up about her traumatic childhood, alcoholism, and climb back to the top 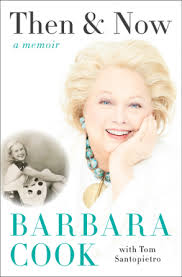 When she was 3, Barbara Cook’s whooping cough killed her sister.

It had jumped from Barbara to the pneumonia-ridden Patricia and caused fatal complications, according to the singer’s memoir, Then & Now. Afterward, her father abandoned the family, and the spurned wife, Nelle Cook, blamed her daughter for the entire debacle. Cook’s tempestuous life had begun:

“‘If Pat had lived, your father would not have left.’ So according to my mother, Pat could have kept my father with us; I was responsible for Pat’s death; so I had screwed that up as well. After Daddy left, whenever I was going to see him, my mother told me I should beg him to come back to us. If I did it right, she said, I could convince him to come back. Of course he never came back, and I always felt that I had failed miserably again.”

With only meager Depression-era finances, Cook and her mother forfeited their comfortable Atlanta apartment for a new life nearby with Nelle’s mother and three unmarried sisters in a cramped, cheerless house that reeked of urine:

“We were desperately poor. So often you hear people say, ‘We were poor but we didn’t know it’ — well, I knew it. I felt so deprived. One of my chores was fetching kerosene from the store in a can. The can had lost its cork, so my grandmother had a small sweet potato screwed into the top. I was…embarrassed to walk down the street carrying a can with a sweet potato sticking out…so I finally refused.”

Nelle got switchboard-operator work, but soon they had to move. She was too volatile to co-exist with her family. Cook had few school friends, but she had already started to perform occasionally in professional shows, listened to the Saturday afternoon broadcasts from the Metropolitan Opera religiously, envisioned a life in New York, and was completely absorbed by her film idols: Nelson Eddy and Jeanette MacDonald; Clark Gable and Carole Lombard; and Laurence Olivier and Vivien Leigh.

“Going to the movies consumed the little spending money I had. I would get twenty-five cents to spend on a Saturday: the movies cost ten cents…I’d start with the first show in the morning and see the picture four times in a row.”

After her 1945 graduation from Atlanta’s Girl’s High, Cook spent three years as a typist, then left for New York. She got work at Asiatic Petroleum and began trying out for shows. Arthur Godfrey “told me I had a lovely voice.” She directed, choreographed, and performed in the Shell in-house review, “Shellebrities”; sang Gershwin, Kern, and Porter at an upscale Boston club; and won an audition to entertain at Tamiment, a Poconos summer resort, with Jack Cassidy, Neil Simon, Sid Caesar, Danny Kaye, and Herbert Ross.

In 1951, Cook had her Broadway debut in “Flahooley,” a musical that quickly closed. But during its run, she met David LeGrant, “my one and only husband, and a profound influence on my life in many ways. He was the only acting teacher I ever studied with…Most important of all, he became the father of my darling son.”

Under his navigation, Cook’s career soared. He contoured her theatrical interpretations in “Plain and Fancy,” “The Music Man,” “Carousel,” “The King and I,” “She Loves Me,” “Candide,” and “The Gay Life,” but — ironically — failed to achieve the same decibel of success for himself.

“When my career… started to take off…David’s…was still floundering, so it was a big break when, late in 1952, George Abbott asked him to appear on a television variety show…called Showtime, U.S.A.…at the very last minute David’s appearance was canceled, a turn of events that had a profound effect on him…one canceled television appearance did something to David’s basic personality — he never had the same kind of get-up-and-go-after that…In retrospect, I realize that David was like all of the men in my life that were supposed to protect me — turns out I was stronger than all of them put together, only I didn’t know it at the time.”

LeGrant’s unwillingness to advertise his teaching talents frustrated Cook and frayed their relationship. She started to drink. While Nelle criticized her daughter’s behavior, Cook had an affair and soon confessed to it; the marriage was over. The LeGrants divorced in 1965, the year their son, Adam, was 6.

Cook and Adam moved to a luxurious New York penthouse, but single-parenting was difficult. Now she was responsible for everything, but she hankered for — and got — more alcohol to push through each day. During those years, there was less theater work but more television roles. Then, inexplicably, Cook started having panic attacks that required sporadic trips to the E.R. Inside her apartment, dirty dishes, glasses, bottles, tissues, newspapers, and trash piled up in small mountains, while an opportunity to work with George Abbott — “Mr. Broadway” — was irrationally declined.

Soon, the singer was drunk, unemployed, nearly penniless, and abandoned; adolescent Adam had gone to live with his father.

“I was so broke that I was stealing food from the supermarket…I would have been starving if I hadn’t stolen from the store…I was desperate. I had let my appearance go and was wearing patched clothes — in every way I was a mess.”

In 1974, Cook met the accompanist-arranger Wally Harper. At his insistence, she pulled herself together for a performance in a Connecticut club that was well-received. Slowly, Cook’s chronic difficulties subsided. The duo produced three decades of concerts that were appreciated by agents, adored by audiences, and recorded into immortality.

In 2011, Barbara Cook received a Kennedy Center Honor, and now — at 88 — she has written this, an often heartbreaking memoir.

By Jeff Benedict and Armen Keteyian