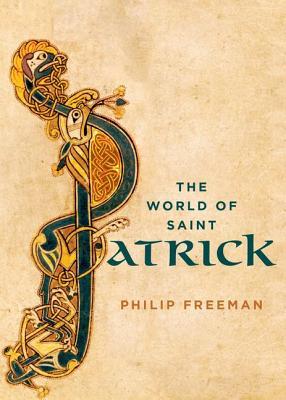 The World of Saint Patrick is a title that seems to promise a historical exploration of the social milieu of fifth-century Ireland. Instead, in this book, historian Philip Freeman has collected a series of major texts translated from Latin and Old Irish, spanning at least four centuries: sources for the life of Saint Patrick, together with several key examples from the literature of later Irish Christianity.

The preface to each document gives some historical information about its background, but these introductions are brief and modest in scope. Even taken together, they convey little sense of the extraordinary richness of the Irish church or its paramount importance to Europe as a center of learning, mission, and monastic culture in what used to be so misleadingly called the “Dark Ages.”

This is the first time these texts have been readily available to the general public in excellent translations. We can certainly be grateful for this access to primary sources, particularly when popular romanticized presentations of “Celtic Spirituality” often owe more to modern fantasy than authentic history.

Patrick was a key figure in the growth of Christianity in this remote island at the extreme edge of the known world. Born into a clerical family of the Roman-British nobility around 416 AD, he was captured by pirates as a teenager and subjected to a brutal life of slavery in Ireland.

Although he had rebelled against his family’s Christian beliefs in his early teens, his faith returned when he was in exile. After several years of suffering and prayer, he had a religious experience of God urging his escape. Once back in Britain, his faith deepened, and he heard a call to return to the scene of his slavery and to the risky work of commending the gospel to the Irish. He enjoyed a measure of success in the face of many obstacles, training and baptizing thousands of converts.

We meet him first in a letter he wrote to British warlord Coroticus, denouncing him for capturing and enslaving a group of men and women whom Patrick had converted and baptized, and demanding their release under the threat of eternal damnation. Then, in his Confession, we have an impassioned account of his own life and orthodox faith, written to support his rejection of a summons by a group of British bishops who had heard accusations relating to a sin he had indiscreetly divulged as a teenager and charges that he accepted bribes. These are the only sources certainly from Patrick’s own hand.

We get a sense of the gathering cult of Patrick as a saint and hero in the attribution to him of a series of church rules issued by a synod that probably met after his lifetime, our earliest glimpse into the formal life of the early Irish church as it struggled to put down roots in a pagan environment.

Then, in the Hymn of Saint Secundinus, we have a paean extolling Patrick’s virtues and achievements. His fame as a saint is firmly established two centuries after his death in a biography replete with miracles and legends, Muirchú’s Life of Saint Patrick.

The collection includes two deeply influential lives of Irish saints who were to enjoy tremendous popularity in Ireland and throughout Britain and Europe. Almost nothing is known about the actual ministry of Brigid, a prominent figure in the Irish church in the second half of the fifth century; Cogitosus’ Life of Saint Brigid is a fabulous record of miracles and wonders. Similarly, The Voyage of Saint Brendan, written in the ninth century, recounts a fabled journey of the saint and his intrepid band of monks by boat, on which they encounter all manner of prodigies of nature and monsters galore.

The World of Saint Patrick has been skillfully compiled for the benefit of readers interested in history, and the excellent bibliography will help those who want to pursue further study. For those who explore ancient texts for their spiritual inspiration, there are real but limited rewards in these texts. It is almost impossible for us to be more than visitors to a spiritual milieu in which there was such a deep fascination with the miraculous.

The collection does, however, include one glorious text that speaks to us today with undiminished spiritual power: a prayer to the Trinity for protection, written centuries after Patrick’s time, but attributed to him out of devotion. This is the famous “Breastplate of Saint Patrick,”also known under the hauntingly poetic title “The Cry of the Deer.”

Generations of Anglicans have sung a metrical translation of this Old Irish prayer in the rousing hymn beginning, “I bind unto myself this day, the strong name of the Trinity.” Philip Freeman’s own translation here is sinewy, robust, and beautiful. The prayer calls out to be memorized and used.

Martin L. Smith is an Episcopal priest, author, and retreat leader. He is the author of a number of books exploring contemporary spirituality, including A Season for the Spirit; The Word is Very Near You; Love Set Free; Reconciliation; and Compass and Stars. His latest book, written with the Rev. Julia Gatta, is Go in Peace: the Art of Hearing Confessions.