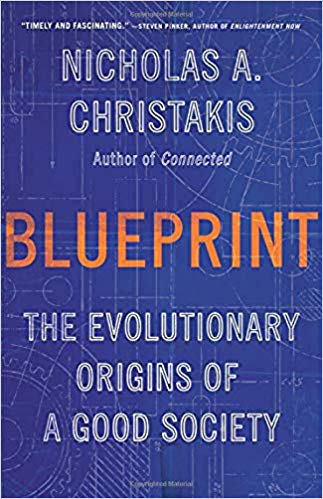 By all rights, any review of Blueprint should be as long as the book itself due to the complexity of the material under examination by author Nicholas A. Christakis. If not as long as the book, then the review might at least consist of quotations from the text because it says more than any reviewer could about the subtitle in particular, The Evolutionary Origins of a Good Society.

Oh, and dear friends, we need to understand this now more than ever. If you fear the political and environmental apocalypses impending, then Blueprint offers hope for how you might organize your life afterward. If you survive.

To begin with the essential, Christakis identifies the “social suite” as “the core of all societies.” These are eight capacities built into societies because they are built into every functioning human:

Because we have these capabilities in our evolutionary structure, creating societies “is not just something we can do — it is something we must do.”

Of course, in practice, as with all combining of DNA, there has also always been great variation in our social structures. Christakis uses chapters two, three, and four to look at unintentional, intentional, and artificial communities. The unintentional are the shipwrecks, stranded explorers, and settlers of the Polynesian islands. The intentional are “Utopian communal experiments” like Brooke Farm, the Shakers, and kibbutzim in 20th-century Palestine/Israel. The artificial include “massive on-line gaming” and “Imaginary Societies” such as those found in H.G. Wells’ The Time Machine and Charlotte Perkins Gilman’s Herland.

Christakis investigates these through the lens of the social suite, and his conclusions are compelling. “In all the seemingly strikingly different human cultures around the world, in all the repeated opportunities to make new societies, we see the same core patterns again and again.”

By contrast, “Rapidly invented, deliberately designed, or wholly novel social systems that seek to abrogate the social suite cannot be as functional as organically evolved ones.”

Shifting gears, Christakis outlines some of our socially conditioned biases; for example, that “kissing was present in only 46 percent of one hundred and sixty-eight cultures studied.” And that monogamy is rare in animal and human societies.

Christakis examines “pair-bonding,” “mating behavior,” “the physiology of orgasm,” and the exaptation that “repurposed” love of offspring to love between life partners. “The transition to pair-bonding in our species was a breakthrough biological adaptation — an epochal shift in our species — and it is still with us today.”

Once we get beyond sex, love, marriage, and family, Christakis takes us into friendship, first by examining how other primates make, keep, and lose friends. He takes this to be (in my words) the great social leap. Up to this point, each individual, though ostensibly sharing, has been looking out for themselves. But, Christakis says, “Our assembly into networks of friendship ties sets the stage for the emergence of moral sentiments…friendship lays the foundation for morality.”

Although you might imagine animals would be left behind at this point, Christakis uses the next two chapters to compare animal friendships and to reconsider human behavior. Sociality in the animal kingdom is, as he shows, worthy of a professional lifetime of examination, the result of that work being, in the author’s case, a palpable empathy for all living beings, an awed respect for the myriad ways animals arrange and express themselves.

At heart, though, Christakis is concerned with genes and culture:

“Animals — whether spiders spinning webs, birds making bowers, fungi controlling ants, or humans arranging their social networks — are genetically programmed to act on the world and reshape it in ways that make it more convivial and that enhance their survival.”

I particularly love that word “convivial,” meaning, denotatively, “life together” and, connotatively, “happy.”

Unable to ignore the festering society he is surrounded by, Christakis acknowledges the challenges to our hopes, that it may very well be that our civilizations will collapse. Still, he sees further, to “the vindication of our confidence in the virtue of society despite its numerous failures…This is not just idle optimism. Rather it’s a recognition of the fundamental good that lies within us.”

So, when water floods the Metro and you have to flee north with only the clothes on your back — when our current unindicted-co-conspirator, alleged-sexual-predator president calls out the Second Amendment people and the United States becomes the untied states — don’t forget: You can create a natural, good society of your own if you adhere to Christakis’ social suite.