Writing about real people is probably the No. 1 issue writers of personal stories, whether memoir, personal essay or newspaper column, worry about. 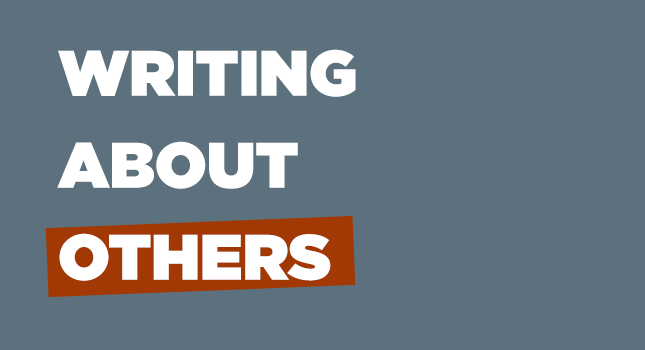 Frank McCourt, for example, was not able to write his brilliant memoir Angela’s Ashes until his mother had passed away. He knew he would have to write about her affair with her cousin, and he knew he couldn’t write about that as long as she was alive.

Waiting until those you want to write about are dead is one option, but if you don’t want to wait that long, how do you navigate the treacherous waters of writing about others, especially if they are family? First of all, you should write first and worry later. Why? Because you can never predict how people will react. For example, when Joe Mackall, author of the memoir The Last Street Before Cleveland, gave the manuscript to his wife to read, he worried how she would react to his portrayal of her. Instead, she got upset at his statement that living in his boyhood neighborhood was the last time he had felt complete. Had he never felt complete living with her?

He hadn’t seen that one coming. Nor did I when I shared an essay I had won a prize for with my mother, who got upset because she wasn’t in it. No amount of writerly explanation helped.

This brings me to my next point: Keep in mind that most people love being written about. It’s the same phenomenon as receiving your child’s school newsletter: You immediately scan it to see if your child is featured. If not, you lose interest. The first question my children ask, whenever they hear I’ve published something, is “Am I in it?” All of us want to be acknowledged, want to be recognized, want to know that we matter, and being written about is a great affirmation of our relevance.

Often, reactions are indicative of the relationship you have with the person you are writing about. A solid relationship won’t fall apart because of your writing; in fact, your writing might deepen your understanding of each other. On the other hand, a relationship that was rocky before you wrote about that person might blow apart. Mark Doty’s father reportedly didn’t speak to him again after he sent him the manuscript of his memoir Firebird. Sadly, even though their relationship had been precarious up until then, they had just gone through a rapprochement that Firebird apparently destroyed (see Doty’s article in The Writer’s Chronicle, Oct/Nov 2005). So ask yourself: What are you willing to risk?

“People’s lives are more important than my words,” says Judith Barrington in Writing the Memoir. Teresa Jordan, author of Riding the White Horse Home: A Western Family Album, warns: “Writers are users. We use the stories around us. I feel that carries a huge responsibility.” How then does a writer honor this responsibility?

Fictionalizing a true story is not necessarily a way to avoid this responsibility. In an interview with The Writer’s Chronicle (Summer 2005), Susan Cheever, daughter of John Cheever, relates the following:

“My father wrote the story called ‘The Hartleys’ in which a little girl — who’s obviously me — goes on a family ski trip — which is in every detail the ski trip we took. The little girl gets killed in the ski tow. That, for me, was far more traumatic than if he’d written a nonfiction piece about that ski trip in which he talked about his fears for the little girl. To me, the fiction is much more dangerous, much more painful for the people who it may be based on, than nonfiction. In nonfiction, at least the writer has some obligation to tell what really happened. … So, in my family, being fictionalized has been ten million times more painful. That’s why, when a student says to me, ‘If I did this as fiction it wouldn’t hurt the people so much,’ I say to them, ‘You are wrong. It will hurt them more. Because you as a fiction writer have more power.’ ”

If you feel you’re treading on thin ice, ask yourself, “Which decision is more life-enhancing?” Be selective. Telling all or not telling anything is not the only option. Often the way you shape a story allows you to leave out complicated stuff. For example, by focusing on small moments between her dying son and herself, a student of mine has been able to write her memoir as a series of essays that don’t get bogged down by the larger family story.

When writing about others, the main challenge is to see and portray real people as multifaceted characters. This can be especially hard if you are writing about a family member who, after all, has a defined role in your life. That person is your father, your mother, your brother. But who is she/he apart from that? What challenges was she/he facing? What motivated him or her? The process of flipping your point-of-view to see a family member as a character in a story can be one of the most rewarding and illuminating byproducts of writing memoir. Nevertheless, it is important to keep in mind that we all have our own perspective and can only tell our version of the truth. As Michael Steinberg, author of Still Pitching, once explained to his mother, “I’m writing about my grandfather, not your father.”

As you write about others, don’t show your work to those involved until you have arrived at a final version you can stand behind. If you showed your father a draft and later deleted a passage he really liked, he’d be disappointed. Likewise, it’s not worth possibly upsetting someone with something you’re not sure you’re going to put out there. Share your work only when you as the writer have arrived at your version of the story. Offer to make changes, but reserve the right to tell your story.

Writing is also a collaborative effort, and family members can be great fact checkers. At the very least, they need to know that they are being written about and ideally they need to be comfortable with your portrayal of them. You can, of course, change names to shield their identity, but chances are they will recognize themselves, so always take the high road and involve everyone who’s involved in signing off on the manuscript.

In the end, however, it’s your story and you can’t satisfy everyone. But you can make sure to be satisfied yourself. So at least be behind your own work 100 percent.