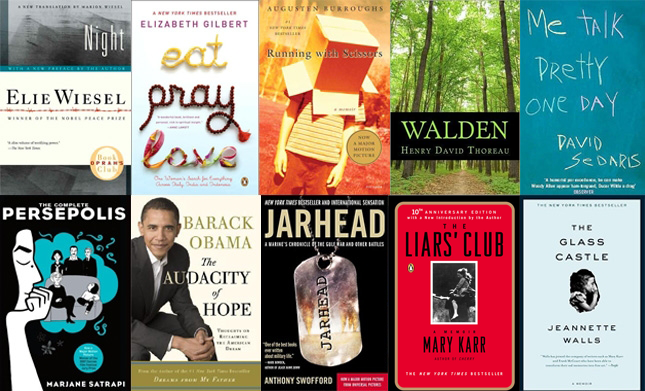 When a new round of my “Writing the Memoir” class convenes at StoryStudio Chicago, I devote the first class to defining memoir.

I usually ask students about their favorite memoirs, and once, a student mentioned that she found some memoirs boring.

“Can you give an example?” I asked.

Aha! I sighed with relief, because Bill Clinton’s 1056-page My Life is not a memoir. It’s an autobiography. In all fairness, Bill Clinton’s editors didn’t put “a memoir” on the cover; my student had just thought of it that way. Publishers, it seems, are more cautious about putting the memoir label on the cover. For instance, Katharine Graham’s Personal History is referred to as memoir on the back cover, whereas on the front the New York Times is quoted, “An extraordinary autobiography… touching… winning… inspiring.” This happens often: Autobiography and memoir are used interchangeably.

So what’s the difference between autobiography and memoir? And why should we care? Both are written by the person whose life is being narrated, right? Yes, but autobiography is a chronological account of that life, from birth to a later stage in life. Autobiography is concerned with recounting what happened, with setting the record straight, with giving a behind-the-scenes glimpse into the life of a usually famous person. Autobiography is not concerned, as memoir is, with introspection. A good memoir is not an accumulation of anecdotes, however entertaining they may be, but rather an inquiry into what those stories mean to the narrator. A memoir does not comprise a whole life; rather, it examines a particular phase in a life. Childhood memoirs are a great example, such as Mary Karr’s The Liars’ Club, Tobias Wolff’s This Boy’s Life, or Frank McCourt’s Angela’s Ashes.

Labels are important because they manage reader expectations. Hence all the brouhaha when a memoirist is found to have made up parts of his story. Readers expect memoirs to be true, and there is hell to pay if they are not. See the scandals over James Frey’s A Million Little Pieces, Greg Mortenson’s Three Cups of Tea, or even worse, the entirely fabricated Holocaust memoir Fragments by Binjamin Wilkomirski. Truth in memoir, however, is such a big topic that it shall warrant its own essay here soon.

An autobiography is expected to tell everything; in contrast, a memoir tells something, namely everything that is related to the chosen topic. You can write only one autobiography of your life, but you can write many memoirs; Mary Karr is a great example. While The Liars’ Club recounts the story of her childhood in a dismal Texas oil town and a wildly dysfunctional family, her next memoir Cherry is about her promiscuous adolescence, and her most recent Lit tells the story of her recovery from alcoholism and her finding solace in the Catholic faith. Whereas Mary Karr’s memoirs are circumscribed by time, Eileen Simpson’s, for example, explore different topics: Orphans (losing her parents early in life), Reversals – A Personal Account of Victory over Dyslexia, and Poets in their Youth (her tumultuous early marriage to poet John Berryman).

We have to keep in mind that memoir is a young literary genre. Not that memoirs weren’t written before the 1980s; in fact, my students and I often read classics like Nabokov’s Speak Memory or Karen Blixen’s Out of Africa to immerse ourselves in different styles of writing. Notably, these classics are from the 20th century. There are earlier memoirs, such as Henry David Thoreau’s Walden (published in 1854), but they are few and far between. Earlier examples of personal writing tend to come in the form of journal or letter writing, autobiography (Augustine’s Confessions) or personal essay (Michel de Montaigne’s Essays). But creative nonfiction has come into its own as the fourth genre in the past few decades. Just as reality shows have taken on a large role in television, so have real stories gained a more prominent spot on our bookshelves.

In a way memoir’s growing pains, namely the often heated public discourse about memoir, echo the early 18th century in literary history, when the novel started taking shape. Up until then, literature had been written mainly in verse and took the forms of poetry and drama. Interestingly, early novels such as Daniel Defoe’s Robinson Crusoe (first published in 1719) are written in first person, in a confessional tone, and read, to the modern eye, like a memoir. I have often wondered whether, if Willa Cather were writing now, My Antonia, her searing novel of a Czech immigrant family’s struggle with pioneer life on the American prairie, would have been written as a memoir. That genre was not available to her yet, or perhaps she didn’t dare to write it as a true story. Many novels, we must remember, are thinly disguised autobiographical accounts.

Just as the novel grew into narrating the stories of ordinary people, as opposed to those of royalty and noblemen (the celebrities of their times), the memoir is the genre that provides room for ordinary people to tell the true stories of their lives, and for all of us to discover that we are not alone. And that, to me, is the power of literature, and perhaps, particularly, the power of memoir: It captures what it is like to live in our times, and to grapple with, and hopefully overcome, our struggles.