A Justice for All?

Two new books promise an unbiased look at Brett Kavanaugh’s contentious confirmation, but only one delivers. 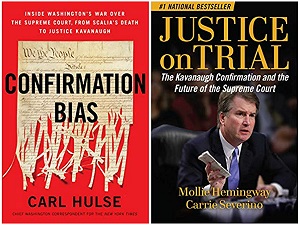 Barely 48 hours after his historically narrow confirmation to the Supreme Court, Justice Brett Kavanaugh sought to put what he called the "contentious" confirmation process behind him.

"My focus now is to be the best justice I can be," Kavanaugh said at the duplicative White House swearing-in ceremony. "I take this office with gratitude and no bitterness."

With Kavanaugh's first term now completed, however, the controversy over his nomination and confirmation is not over; it is not even past. Instead, Supreme Court junkies can relive the distasteful details in one or both of two books detailing the events that put Mr. “I Like Beer” on the highest court in the land.

Carl Hulse, chief Washington correspondent for the New York Times, closes Confirmation Bias: Inside Washington's War Over the Supreme Court, From Scalia's Death to Justice Kavanaugh, his scrupulously nonpartisan account of the events from Antonin Scalia's passing in February 2016 to Kavanaugh's confirmation in October 2018, by quoting Kavanaugh's description of the independent federal judiciary as "the crown jewel our constitutional republic."

Alas, Hulse concludes, that jewel has been "badly tarnished" by the blatant partisanship of Supreme Court politics of the previous two years.

Mollie Hemingway, a journalist with the online magazine the Federalist, and Carrie Severino, a longtime conservative activist now with the Judicial Crisis Network, claim, in Justice on Trial: The Kavanaugh Confirmation and the Future of the Supreme Court, to have written a similarly objective account of Kavanaugh's path to the court. They have done their homework­ — more than 100 interviews and 50 pages of chapter notes — but their conservative slip shows in too many places.

Among many other examples, Hemingway and Severino go out of their way to denounce the Times' longtime Supreme Court reporter Linda Greenhouse as "notoriously liberal," as though the Pulitzer Prize winner was guilty of some unspecified legal or ethical offense. They also reduce progressive groups' support of women's rights to nothing more complicated than support for "unregulated abortion."

Federalist Society members can be seen nodding their heads in approval, but not anyone interested in an objective account.

For Hemingway and Severino, their admiration of Kavanaugh knows no bounds. They describe Kavanaugh, who spent 12 years resolving complex statutory and regulatory issues as a judge on the U.S. Court of Appeals for the District of Columbia Circuit, as "always guided by the text and original meaning of the Constitution."

With due respect to the Framers, it is hard to see how their handiwork guided Kavanaugh in adopting consistently anti-regulatory positions as a judge on what is often described as the country's second-most-important federal court.

Hulse rightly credits Kavanaugh's status as "a shining star within Washington's Republican circles," but he also notes Senate Democrats' view of him as "a smarmy, disingenuous political operative" through a succession of politically tainted jobs with independent counsel Kenneth Starr in the Clinton investigation and in the White House Counsel's office under President George W. Bush.

Both books naturally detail the late-breaking accusation from Christine Blasey Ford that Kavanaugh sexually assaulted her when they were both privileged teenagers in Bethesda, Maryland, more than 30 years earlier. Hulse, a Times reporter for 33 years, covered the dramatic Senate Judiciary Committee hearing where Ford detailed the accusation from an admittedly hazy memory, followed by Kavanaugh himself in a categorical and fiercely indignant denial.

In Hulse's view, Ford's testimony was sufficiently persuasive that it "overshadowed…attempts to chip away at her credibility." Kavanaugh's performance, on the other hand, prompts Hulse to recall that the nominee's "Trumpian combativeness" raised questions as to whether he had helped or hurt his chances for confirmation.

For Hemingway and Severino, Ford's credibility is the white whale they are determined to harpoon, at whatever length necessary. They mine every unrecollected detail and every minor discrepancy to show that Ford's account was not merely uncorroborated but unbelievable. Thus, the publisher's publicity material for their book promises "the TRUTH behind the Kavanaugh confirmation."

The authors' contrasting approaches can be seen in miniature via the differing accounts of Democrats’ accusation that Kavanaugh had lied during his previous confirmation process about his alleged complicity in an earlier theft of a Democratic strategy memo.

During Bush-era judicial confirmations, Republican operative Manuel Miranda filched a Democratic memo from Senate computers and passed its contents on to Kavanaugh, the White House point man on judicial nominations.

Kavanaugh denied having any reason to suspect the origins of the information and claimed, implausibly, that he thought it customary for Hill staffers to exchange political strategies across the partisan aisle. Vermont's Patrick Leahy, the victim of the digital Watergate, did not accept Kavanaugh's denial, nor does Hulse — even while acknowledging there was "no smoking gun."

Hemingway and Severino, on the other hand, flatly conclude that "nothing indicated" Kavanaugh had reason to believe Miranda had obtained the information improperly.

The three authors end in a kind of agreement that the judicial confirmation process is badly broken but cite different evidence thereof. Hemingway and Severino detail a 30-year list of discreditable confirmation fights from Bork and Thomas through Alito and now Kavanaugh. Conspicuously absent from their list is Senate Majority Leader Mitch McConnell's decision in 2016 to deny Supreme Court nominee Merrick Garland any hearing whatsoever.

For Hulse, McConnell's action took judicial politics to a new level of partisan dysfunctionality, with the intention and effect of aiding Donald Trump's presidential campaign.

Hemingway and Severino close by warning that the Kavanaugh confirmation may dissuade "the best Americans from being considered for the nation's judiciary" unless the American people prevent it from happening again.

Hulse, on the other hand, closes by quoting McConnell congratulating himself on his tactics.

"In the end," Hulse writes with evident regret, "both sides believed that the warfare over the courts and Kavanaugh played to their immediate benefit — probably the worst possible outcome for the Senate, the Supreme Court, and the badly broken confirmation process."