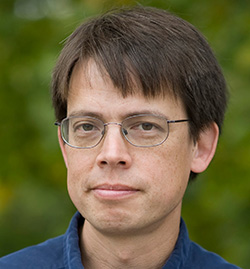 About The Shape of the Eye

When Laura Estreich is born, her eyes present a puzzle. Does their shape indicate Down syndrome, or simply the fact that she has a Japanese grandmother? In this powerful memoir, poet and stay-at-home dad George Estreich reflects on his daughter’s inheritance — from the family history that precedes her to the legacy of her genes, to mistaken portrayals of Down syndrome today, tracing contemporary errors to historical sources. Against this backdrop, he shows us a child unlike any other — quirky and real, loved for everything ordinary and extraordinary about her.

The Interview with George Estreich

I was very moved when I read the realistic picture you painted of the complex range of emotions you experienced when you first learned Laura had Down syndrome. As you look back on that time now, with eight or nine years of distance, are there any words of comfort you would offer yourself? What can or should people say when their friends or family members have a child with Down syndrome?

I think that the book itself would be the best words of comfort. As the book shows, Laura healed and things turned out OK. Having a kid with Down syndrome was a radical turn in a lot of ways, but it wasn’t the bad thing I feared.

As for what people should say: it depends on who’s speaking and who’s listening, but in general I’d avoid offering unsolicited medical advice and/or opinions about what “they” are like. Give parents the space to think whatever they think and feel whatever they feel. Offer congratulations, try to listen and bring casseroles.

You and Theresa made the decision not to have fetal testing during the pregnancy, because you knew that termination of the pregnancy was not an option for you. But, do you think there could be advantages to having the test in order to know and prepare in advance rather than waiting for the child to be born? If you had known Laura would be born with Down syndrome, would you have done anything differently to prepare for her birth?

Yes, there could be advantages: some report that knowing in advance did in fact help them to prepare. If we’d known in advance, I imagine we would have done research beforehand. There’s a good chance, though, that this knowledge would also have resulted in a far more medicalized pregnancy — more trips to Portland, more scans, more dire warnings — which would itself have caused stress. Since we didn’t take that path, it’s hard to know for sure.

More important than whether the tests are used, I think, are how they are used: under what circumstances, with what reasons and with what kinds of message, explicit or implicit. If the test is offered and used in a way that genuinely supports the mother’s values and intentions, and if the information about the condition tested for is accurate, balanced and sensitive to human concerns, then I think the test has a better chance of benefiting the mother. If, as is often the case, the test is offered in a value-loaded way, and the condition it tests for is represented purely as a defect, then it is less likely to be helpful.

I have a nine-month-old niece who is just starting to experience solid foods. Getting babies to eat can be a challenge! I found your intense and prolonged challenges in getting Laura to eat particularly devastating. On top of all of the health problems, that felt to me like adding insult to injury. You present it in such a matter-of-fact way. You kept going to the store and trying every food you could find. You and Theresa seemed so patient and consistent. Didn’t you ever feel at a loss? Did you never lose your temper? How did you get through it?

I often felt at a loss. I don’t remember any specific time when I lost my temper, but I probably did. The matter-of-factness is kind of the way I write: to try and register a quiet surface that implies the emotion, rather than spelling it out. I went to the store because I felt at a loss, but also because I felt hope. By the time Laura would at least try a new food, we were past the worst of it, though we still didn’t know whether she would eat again.

We got through it by supporting each other, and with the help of some excellent specialists. But we also just kind of persisted.

In the Afterward, you write, “I wrote this book to begin, or to continue, a conversation … because the alternative was shame and silence.” Can you expand a little more on what you mean? Have you felt ashamed of Laura? Do you have shame or regret on any choices you have made?

I’ve never felt ashamed of Laura. I’m proud of her, as I’m proud of Ellie, my oldest daughter. I can be fairly insufferable on that point but will resist.

I don’t feel ashamed about any choices I’ve made. I don’t even regret spending so much time on the Internet, making myself feel worse by looking up doubtful and/or outdated facts about Down syndrome. It was messy and wayward, but it was necessary, too: a part of the process.

When other parents of Down syndrome children read this memoir, what do you hope they will gain from it?

I don’t have specific hopes about that. Parents of children with Down syndrome already understand much of what I’m trying to get across. I’ve been very gratified that some have told me the book puts difficult things into words, that it names things they’ve felt. That means an enormous amount to me.

But a big part of the book, for me at least, is to question the automatic division between people with Down syndrome and people without — and between “special needs” parents and the other, presumably “regular” kind. So I hope that both parents of children with and without trisomies will simply enjoy the book and think about questions they might not have considered before.

The most intriguing part of your book for me is the question of defining “normal” and “healthy.” Human beings come in such a wide range of natural abilities and physical attributes: how do we classify what is normal and/or healthy? And, as you acknowledge, even your own experiences with Down syndrome will not be the same as others’ experiences with the same condition. So, is there value in trying to define and catalog it?

Last question first: I think that there is great value in trying to understand the condition, because we don’t fully understand it yet. We know that it is associated with an extra chromosome, but we are still trying to understand how that genetic fact results in the intensely variable, easily recognizable syndrome that so many have.

More important than whether we study Down syndrome is why. Is research meant to treat? To prevent? To shed light on some other condition? But then, to consider why we study Down syndrome is to consider your first question about what’s “normal” or “healthy.” In my picture of the world, Down syndrome is one way to be human. It’s part of the normal range of variation, and though it entails many health risks, you can also have it and be healthy. To me, beliefs about these questions underlie the research on the condition, and so open discussion about those beliefs is necessary; and since story offers an understanding of life that a karyotype cannot, stories need to be part of the discussion.

I love the title of this book, so simple and profound.  How did it come to you?  When you look into your daughter’s eyes now, what do you see?

It came to me sort of at once and I knew it was the right title. That was pretty early on in the writing, around 2003. Titles are difficult for me, so I was glad about that.

I don’t specifically look into Laura’s eyes. That would be puzzling to her. But when I look at Laura, I just see Laura. I think I spent all that time writing about Down syndrome and the rest so I could just drop it and be a regular dad — not tracking my life in tandem with living it, not researching the valences and implications. A big roundabout way of doing things, but it seems to have worked.

Mandy Huckins holds a Master of Arts Degree in English from the University of Charleston in South Carolina. She recently moved to the Washington, D.C., area with her husband, an Air Force officer. When not reading, Mandy works for the Combined Federal Campaign-Overseas, which provides uniformed service members and DoD civilians serving overseas the opportunity to make a charitable contributions to one or more of over 2,500 different organizations.

An Interview with Mikita Brottman

The Baltimore writer talks investigative reporting, a mysterious death, and the benefit of blending into the crowd.