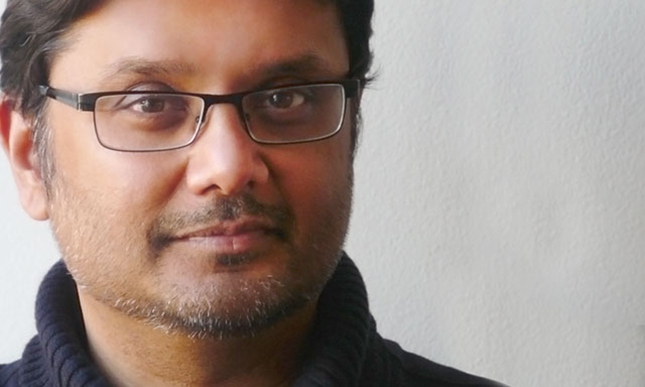 Welcome Ranjit Singh, a new hero caught between two worlds, and even two loves.  He left India after he was forced out of the army. Once the commander of an elite military squad scaling the heights of the Siachen Glacier, he is now the winter caretaker for several wealthy families on Martha’s Vineyard. As the winter grows harsh and his cottage becomes unbearable, Ranjit breaks into the house of an African-American senator and stashes his family in the most comfort they’ve known in quite some time. Unfortunately, they aren’t alone. Mysterious men break in looking for an object that they believe belongs to them. Ranjit has no idea what they’re after, but his efforts to find out uncovers a trail of deception, hidden history, political intrigue … and. of course, danger.

Did you start with the crime or the detective? How did Ranjit Singh come to be?

Neither, really. I think as a writer, I’m drawn to places and settings, and in this case, I was vacationing in Martha’s Vineyard when I met a man who was a caretaker in the off-season. He told me about these luxury houses all over the island which are used for only a few months a year, and then stay empty. These are houses with swimming pools and huge TV screens and designer kitchens. And I thought, “Hmm, this is a great location for a suspense novel.” So I played around with the idea for a while, and the rest of the book came from there.

Was it easy to put down the Sikh prayers? Did you have a sense of sharing them with the world, and did you worry about your use of them? How important do you believe the prayers are to the story, to informing Ranjit’s character?

I was reading a short history of the Sikhs: their religion and culture, and how Sikhism arose as a reform movement to the strictures of Islam and Hinduism. This history included extracts from the Guru Granth Sahib, the Sikh holy book, which is a compilation of the teachings of all the gurus. Seeing these extracts interspersed with the text gave me a visceral connection with the religion; they were so poetic and with such powerful images that I wanted to follow a similar approach with my book. Being a Sikh — wearing a turban and a beard — is not a style but is integral to the religion, and so appearance, prayer and a way of being in the world are all intertwined. Throughout the book, Ranjit remembers visiting the Golden Temple with his mother — a tranquil, religious place — and when he is under stress he returns to these memories. And so the prayers are part of who he is.

Sikh tradition believes that “realization of the truth is higher than all else, and higher still is truthful living.” Is it difficult when the truth isn’t shared? For instance, I’d say that truth for Ranjit and his wife, Preetam, would not be agreed upon? How would this be reconciled among the faithful?

I think that this question presumes a divide between the religious and the secular. While Ranjit has a deep reserve of faith, he is a modern man, and is in a relationship where he married early and for deeply romantic ideas. When the book starts, he and his wife have been through a lot, and his marriage is deeply frayed. I think that the book explores this tension and this situation.

Ranjit Singh is a character who seems destined to grow. The readers have met him in his infancy as a character. Was he conceived this way? Will the reader meet him again in a sequel?

The Caretaker is the first book in a trilogy, and the way I see Ranjit’s path is as a man trying to find his home in America. In the second book, titled The Last Taxi Ride, Ranjit is a cab driver in New York City and becomes implicated in the murder of a Bollywood actress. In the third book, he is running a motel in Northern California. Throughout these books, he will have adventures and romantic entanglements and try to raise his daughter. In the end I hope he finds a home, and some peace in his heart.

Will there be more mountains in Ranjit’s future?

Never say never. I will say, though, that there are high places in Ranjit’s future, and his climbing skills come in handy!

Preetam seems to ignore her life in favor of the television. Everything on television looks better to her, and often to us. Even love stories on television seem more engaging than Preetam’s circumstances? Are we all creatures so easily given to escapism? Maybe that’s the reason that television is so engaging. Books even more so. Rather than change our situation, we’d rather escape to someone else’s.

My experience as an Indian immigrant in America has been that Bollywood movies are a very important part of life here. In the old days, they would often be bootleg VHS tapes; now there are cinemas showing Indian movies all over the country, and you can log onto a Website for unlimited streaming movies. It is exhausting and alienating dealing with a mainstream American reality, and movies are a great escape. Bollywood movies are perfect, too, because they are designed as pure escapism for the masses in India, with familiar plots, extravagant locations, and song and dance sequences.

In my book, though, Preetam, Ranjit’s wife, is drawn to the old black-and-white classics, to an older, simpler time of pure romanticism. She has imbibed many of these movies, and watches them over and over again, literally inhabiting them as a way of countering the harsh reality around her.

You’ve written a multicultural book with white, Indian and African-American characters, and seemingly with ease. How? Is it now the way of the world or the way of your world?

Growing up in India, speaking three languages and moving back and forth between different classes and generations, I’ve been raised to find a way to connect with people and to move between different worlds. And as an immigrant, one has to be flexible and constantly fit in. I think that gives immigrant writers a certain agility and empathy with different viewpoints. Writing is, for me, an act of empathy, and any good writer, I feel, can imagine and portray what it is like to be in a character’s shoes, regardless of ethnicity or sex.

Ranjit goes back and forth from the Siachen Glacier to Martha’s Vineyard and Boston and isn’t quite at home in any place. Are homeless characters easier to move around?

The book is set in New England, and Ranjit’s memories are of the Siachen Glacier and of India. For immigrants, living in two worlds at once — the world that you left, the world of ”then,” and the world of ”now” — is, I think, a common experience.

Do you believe that the story segments that took place on the glacier slowed the narrative? And if so, did you want to slow the reading? Why?

I personally like books in which different strands of story run parallel and then come together at the end. I think, as authors, we all write books that interest us, that we’d like to read.

What do architecture and literature have in common?

The design process and the writing process are similar. They are both iterative — requiring exploration and frequent revision. And of course, both novel writing and architectural design are based on finding a structure that guides the experience, yet allows variation and flexibility.

Have you moved seamlessly from one to the other? Can you describe a little of this journey?

I’ve always been writing, since I was a child — stories, poems. Even when I was an architect, I took writing classes and completed two novels that are “in the drawer.” So when I decided to take up writing full time, I had quite a bit of experience with writing. But architecture is a very demanding career, and leaves little energy for writing, so I decided to take a risk and begin writing full time. Luckily, I ended up selling a two-book deal to St. Martin’s Press, for their Minotaur imprint.

From inception to publication, were there major changes made in the book? Were they author or publisher motivated?

Any writer who has completed a long piece will know that the first draft is very far from the finished work. Most of the value for me comes from rewriting: going deeper, finding the structure and motifs and plot of the book. My trusted group of writer friends in D.C. and New York were instrumental in giving me feedback that shaped the book; my agent suggested character developments; and my editor, who has a great eye for pacing, suggested that I tighten some of the plot. In all these cases, I took their feedback, let it sit for quite a while, mulled over it and came up with solutions.

This is your first book? How close to the imagination of this experience was the actual experience?

This is my first published book, but as I mentioned, I’ve written two novels before, so I knew a little about the problems of writing a novel. In this novel I discovered a process that works for me, after a lot of trial and error. The rest of the process — publication, publicity and marketing — were all a voyage into the unknown.

Can you tell us little about your next book?

In The Last Taxi Ride, Ranjit is a cab driver in New York. One day a beautiful Bollywood actress gets into his cab, and Ranjit thinks that his luck has changed. But when she ends up dead, and he is implicated in her murder, he must clear his name. The book explores the world of New York cabbies, the immigrant communities there and the hidden world of human hair importers.

An Interview with Jim Davies

The author of Riveted: The Science of Why Jokes Makes Us Laugh, Movies Make Us Cry and Religion Makes Us Feel One with the Universe talks about the inner workings of the mind.