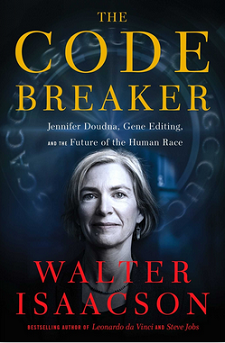 No historian enjoys writing about science more than Walter Isaacson. In the last 20 years, his bestselling books have moved from Benjamin Franklin’s inventions to Albert Einstein’s theories to Steve Jobs’ technology wizardry to Leonardo da Vinci’s innovations. Now, with The Code Breaker: Jennifer Doudna, Gene Editing, and the Future of the Human Race, Isaacson puts himself on the cutting edge of human biology, where the moral questions are as complex and numerous as the scientific.

Branch Rickey, the man who brought Jackie Robinson to the Brooklyn Dodgers, liked to quote John Milton for the proposition, “Luck is the residue of design.” The adage certainly holds true for Mr. Isaacson and The Code Breaker. After the author shrewdly seized on the story of Dr. Doudna and her emerging field of gene editing as being book-worthy over three years ago, and then neared the home stretch of finishing his latest blockbuster, manna fell from heaven onto his plate in 2020.

Last March, the pandemic triggered the application of his protagonist’s specialty, because the technology was necessary for the creation of effective vaccines against coronavirus. Seven months later, her profile skyrocketed when Doudna won the Nobel Prize in chemistry. From a book-selling standpoint, these two events are somewhere north of highly fortuitous.

Although The Code Breaker is a fascinating story, that doesn’t mean it’s an easy read. Isaacson cogently details the developments in gene editing over the last decade, but the subject is not instantly understandable to those (like this reviewer) who have not studied it before.

Regardless of the reader’s learning curve, what makes the book worth the somewhat heavy lifting needed to absorb it are the critically important scientific developments conveyed and the looming questions framed as the world faces the prospect of future generations whose genetic makeup is likely to change.

For those who have no prior experience with biotechnology, Isaacson succeeds in moving the needle toward the layman’s having a more active engagement with nature’s mysteries by frequently comparing his subject’s appeal to the pull of detective stories.

In both fields, no one advances toward his/her goal of finding answers to challenging problems without a high level of curiosity, dogged perseverance, and the competitive drive to triumph over foils. Jennifer Doudna has these traits in abundance, and what makes her an especially appealing heroine are her talents for team-building and collaborating with colleagues while challenging them to pursue their own discoveries.

Dr. Doudna’s specialty is CRISPR, an acronym for the “clustered regularly interspaced palindromic repeats,” found in the bacteria in everyone’s DNA. CRISPR have the capacity to “remember and destroy viruses that attack them” — meaning they comprise “an immune system that can adjust itself to fight each new wave of viruses.”

She, her team at Berkeley, and other scientists around the world have led the movement to “use CRISPR to engineer inheritable edits in humans that will make our descendants less vulnerable to virus infections,” and this “could permanently alter the human race.”

Isaacson does a good job discussing the moral questions that arise once genes can be edited; surprisingly, executing the editing sequence doesn’t require a Ph.D. in chemistry, as demonstrated by the author’s being taught how to do it by one of Doudna’s laboratory lieutenants.

When it comes to wrestling with the ethical issues, it’s probably not hard for most people to get comfortable with the idea of editing genes to bring an end to sickle cell anemia, Huntington’s disease, cancer, blindness, or covid-19. But what about using it to increase height, enlarge muscle development, and raise intelligence?

How would allowing wealthy people to enhance their children with expensive gene editing affect the American ideal that “all men are created equal”? How would it impact athletic competition? Should there be laws that restrict gene editing or should it be each individual’s decision whether to implement it? As noted throughout The Code Breaker, it doesn’t take long before the moral questions lead down a slippery slope.

The book vividly depicts how, prior to the pandemic, those involved in CRISPR research were battling constantly to get their papers published and patents issued first. The intense rivalries became “the fire that stokes the engine” of discovery. Yes, they had that upside, but the competition also produced protracted patent litigation and turf battles of varying scales. It didn’t take long for the inventions to lead to the formation of biotech companies fueled by venture capitalists, and the wonder and beauty of scientific development soon became tarnished by the pursuit of the almighty dollar.

When covid-19 hit, however, the scientists stopped their jockeying for position and showed their true altruistic colors. Casting aside past discord, Doudna and other researchers locked arms and shared their work in a coordinated effort to bring an end to the suffering and dying as quickly as possible. The book’s account of this heroic effort in response to the coronavirus ends on a happy note:

“COVID was the biological event catalytic enough to bring science into our daily lives…Its legacy is to remind scientists of the nobility of their mission.”

In his epilogue, Isaacson laments that if he could live his life all over again, he “would focus far more on the life sciences.” Fortunately for readers, he instead chose to pursue a career as a journalist and historian. His unique skill as a master storyteller of scientific development over the centuries has educated not only his fellow Baby Boomers, but also succeeding generations, helping people of all ages and backgrounds travel down the long and winding road toward understanding how life works.

Talmage Boston is an attorney and historian in Dallas whose most recent book is Cross-Examining History: A Lawyer Gets Answers from the Experts About Our Presidents.